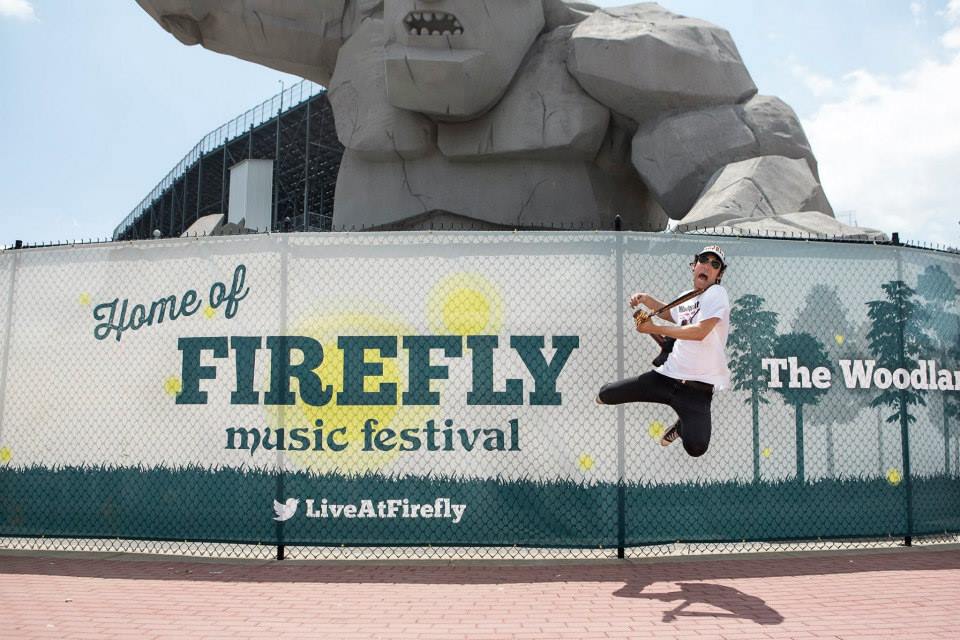 Mike Rocket doubles as a teacher at an elementary school in New Jersey, and a talented musician. He first picked up a guitar in the 1990’s, but in the early 2000’s Mike decided to really pursue music as an artist. Although he’s a teacher, Mike doesn’t teach music and has actually never taken a course that’s needed to teach it. However, his love for music outside of the classroom has taken him all over the country, from SXSW in Texas, to the sidewalk at the entrance to Firefly Music Festival every year since 2012. In an exciting twist of events, Mike was invited to perform inside the festival this year, which was an amazing breakthrough for him as an artist. We got the chance to talk to Mike about what this opportunity meant for him and his career. Check it out!

What inspired you to begin playing outside of Firefly?

After being invited to perform at SXSW in 2012, I felt it was similar to the CMJ Music Marathon, which I  played a couple of times prior where it was just another bar gig in a city of hundreds of stages. At shows like these it’s like a lottery where maybe someone important might come to the set and discover me. After my official performance with the band at SXSW, I headed to the streets of Austin and thought it was like playing on the sidewalks of NYC but much better because all the people passing by were actually interested in new music and festivals. When I returned from SXSW I Googled other festivals that were happening that year. I discovered Firefly and thought maybe I’d stop by since it was only around 150 miles away. I had a gig in Atlantic City the night before, so the next day, which was Saturday June 16, I headed to Firefly! I stood with a guitar by the main entrance and within a few minutes of playing I was asked to play elsewhere. Instead of getting in the car and heading back home, I set up by the cross bridge a few hundred feet away from the entrance where a lot of people were entering and leaving the shows.

How many years have you been playing outside of Firefly?

I’ve been playing there for five years, including this year. I also played outside this year the day before and the day after my official Firefly performance.

Do your students know that you’re also a musician, and do you incorporate music into your lesson plans?

Yes, two of the songs I played during our set at Firefly I have played for my students during social studies class: ‘I’m Dreaming of A Better World,’ and ‘Are We Ever Gonna Learn from History,’ both of which will be on my upcoming album.

Is music something that you would like to take up as a full-time career, or do you enjoy teaching too much to ever give it up?

Yes, music is my purest passion. I enjoy teaching, but public education is corporate education and it can get extremely frustrating.

After all of the years you’ve been playing outside of the festival, did you ever think it would culminate into you getting your own time slot on one of the Firefly stages?

Yes! In each of the past four years, people would encourage me by saying, “You should be playing inside.”  As I played outside in 2013, 2014, & 2015, I kept in my mind on what Clive Davis said during a Q&A for his autobiography at an Apple Store in NYC. It was then that I got to hand some of my songs to the “Man with the Golden Ears” and ask him a question. He then introduced me to the audience. Right after my conversation with Clive, when another artist asked what it takes to make it, Mr. Davis said the following: “As Mike Rocket points it out, ‘hard work’, ‘tenacity’, belief, and you just keep doing it.”

Describe what it was like when you found out they wanted you to play inside the festival this year. How did you find out?

It was a sheer sense of accomplishment. I entered the contest of one of the ‘book your band at a festival’ sites and got the rejection. I realized that the best way to get it done is not to follow what has been done, but to find your own path outside of the box. As the father of Wayne Gretzky once said, “Skate to where the puck is going, not where it has been.” In early May, an article had just been published about me on the Firefly site by Jesse Berdinka entitled “Who is Mike Rocket?” A couple of days after it was published, Jesse told me that he asked the people at Red Frog Events if I could have a spot on the Treehouse Stage. The next day, I got the email “How would you like to perform at Firefly this year?”

What was it like to be an artist at Firefly and to have access to all of the behind-the-scenes things that regular festival-goers don’t typically get to see?

It was surreal. My band and I were treated like stars. We had our own air-conditioned tent. We got to hang out with a bunch of other bands and even be on stage with the other bands during their sets.

Did anyone approach you this time around and let you know they remembered you from past years when you played outside of the Festival?

Yes, there were quite a few. Some I remembered meeting!

What other sets did you get to watch at Firefly? Which were your favorites?

I got to Watch Fitz and the Tantrums and Fetty Wap, and I enjoyed them both.

Did you get to meet any of your personal favorite artists that were performing that weekend?

I got to hang out for a bit with Catfish and the Bottlemen. I really like them and they’re really great guys. I meant to go to their set but it was shortly after ours and the hot sun during our set had gotten the best of me.

Do you intend to return the festival and play again next year?

I would love to return next year and will definitely do so if invited!

Throughout your music career so far, who have you gotten to play with?

My band for the Firefly set included the following musicians: Lisa Bianco (guitar), Nick Clemons (backups, harmonica, and tambourine– Son of late Clarence Clemons), Caroline Garlick (violin), Timmy Douglas (bass), and Eric Gonzalez (drums). Also, I have been fortunate to have some other awesome musicians join me for sets. Rock N’ Roll Hall of Fame member and original drummer and founder of the E Street Band, Vini “Mad Dog” Lopez has played drums for me several times. Rock n’ Roll hall of Fame guitarist Ricky Byrd– who played guitar for Joan Jett (“I Love Rock and Roll”), Roger Daltrey of The Who, and others– joined me on guitar for a performance earlier this year.

What can we expect from you in the near future– shows, new song, new EP, album?

I hope to have my new album completed by the end of the summer! It will include three of the songs we performed. I have also begun working on a song about Firefly, which may be included.

One thought on “An Interview With Mike Rocket”