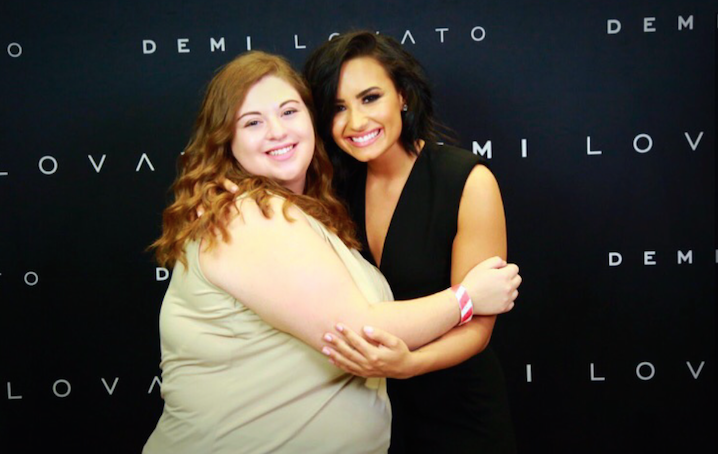 It all started with Camp Rock. After seeing that movie I was completely hooked on Demi Lovato. Overall, I’ve seen her a total of 22 times, along with meeting her eight times as of last week’s show at the Barclays Center in Brooklyn. I don’t love her just because of her purely amazing vocal talent. I love her because there is an amazing person behind that voice. She is my role model, and the person I look up to the most. Demi is an all-around amazing person.

In the middle of class I purchased premium tickets from Ticketmaster and had to excuse myself because I noticed that I just purchased seats in the front row. The following week I purchased my meet-and-greet ticket and my life was complete.

Eventually the day came and I was just as nervous as I was all of the previous times I’ve met her. I arrived two hours early because I wanted everything to be perfect. I finally got in line and in just ten short minutes I would be meeting my idol again. I was waiting in the first of two tents to meet Demi, and it was finally my turn.

I walked into the tent towards Demi and said hello, and I showed her my tattoo that says, ” I am enough.” Demi said this to herself before the VMA’s and the microphone caught her. It touched my heart so much that I decided to get it tattooed. She thanked me and told me it was gorgeous. Then we took our pictures and I got the opportunity to thank her.

After the meet-and-greet, I made my way down to my seats and freaked out because Nick Jonas and Demi Lovato would be performing right in front of me. The show started with Mike Posner. After Mike’s set, Nick Jonas went on and he was just absolutely amazing.  Then, Demi came on and I was amazed, as usual. There were times that we made direct eye contact and those moments made my night 100 times better.

The show ended with Demi singing her radio hit, ‘Cool For The Summer.’ It was one of the best concerts I have ever been too, and I would highly recommend that everyone runs to see The Future Now Tour.

3 thoughts on “Demi Lovato & Nick Jonas: “There Were Times That We Made Direct Eye Contact, And Those Moments Made My Night 100 Times Better””