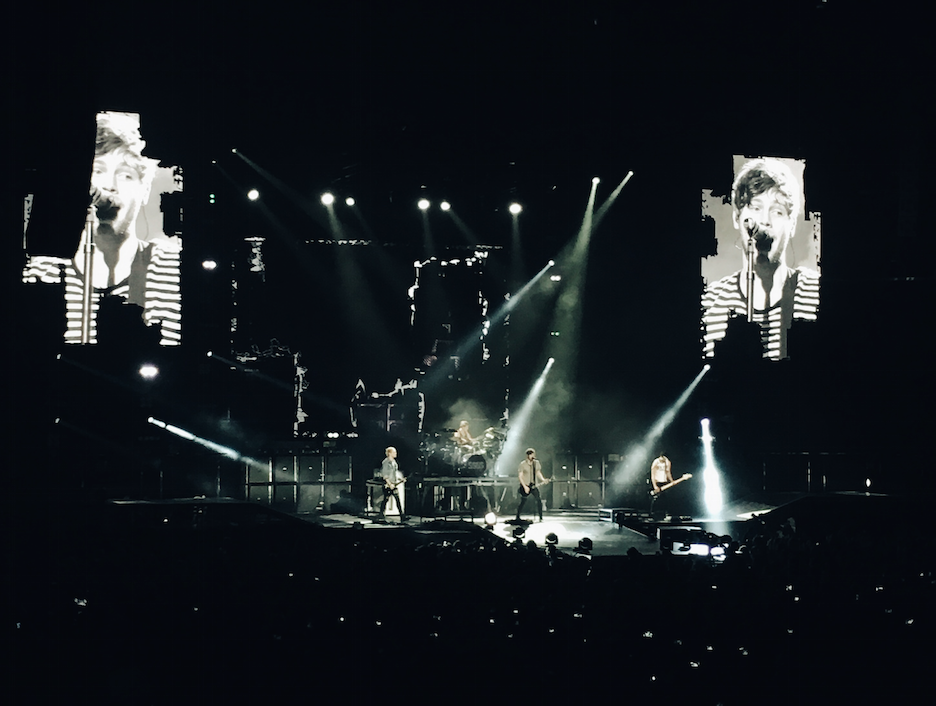 There’s only one band in the entire world that I would risk getting my phone taken away in physiology class for, and that’s 5 Seconds of Summer. Sitting in class trying to fill out a lab while simultaneously refreshing Ticketmaster to buy not one, not two, but three VIP tickets to different shows is no small feat. You would think that seeing the same band six times before is enough to hold me over, right? But something about these guys keeps drawing me back for more.

Since 2012 I’ve dreamed about seeing 5SOS headline a place as prestigious as Madison Square Garden. They would tweet about how amazing it would be and what a dream it was of theirs, so finally being able to witness it (with a sound check package also), was absolutely incredible. Everyone was lined up and ready for sound check, but the one thing you must know about 5 Seconds of Summer is that they are always late, so you can get to the venue by your designated check-in time and still be early!

Sound check was amazing as always. The guys played a few songs and answered a bunch of fan questions (while veering off on multiple tangents), and eventually it came time for the show. Our seats were far from the front row, but the view of the whole stage was amazing. I have only ever been on the floor or in the pit for these boys, so seeing them from a new perspective was really unique for me. The lights went down and the tour banner lit up as all the boys walked on to start their first song, ‘Carry On.’ Within a second of Luke’s first word, the entire venue was singing along at full force, and this enthusiasm remained throughout the night.

The majority of the first few songs were off of the boys’ first self-titled album, but just as many people were rocking out to the classics. Personally, I love to reminisce about that era of 5SOS, so you could definitely find me jumping around to ‘Voodoo Doll.’ After the first quarter or so of the set, the boys took a break to talk to the crowd, as they always like to do. Sentences were hard to put together as all of the boys couldn’t fathom that they were currently achieving one of their biggest goals. It was so adorable!

Moving on to the middle of the set, the boys sang many of their favorites off of their latest album Sounds Good Feels Good. Luckily, some of my favorites like ‘Vapor,’ and ‘Outer Space’ were on the set list. Being that this was my first show of this tour, I was overjoyed that they played so many of my favorites. The night slowed down a little and 5SOS encouraged some audience participation during their hit ‘Amnesia.’ This moment was quite possibly my favorite simply because everyone’s lights were on and the atmosphere in the room shifted from a rock concert to a room full of love in just two seconds flat. All around me people were swaying and smiling in awe at how incredible the entire night was. Even my dad was singing along!

As the night  began to wrap up, there was just one suspicion I had, and I knew the entire arena was thinking it too—would the boys play their new single ‘Girls Talk Boys,’ which was released earlier that day? Sure enough, without a single warning, Michael started tearing it up with his introductory riffs and the crowd went absolutely insane. Having been the first people to ever hear this song live was something that everyone at MSG that night was celebrating. The boys played their last few hits like ‘Good Girls,’ and their awesome cover of ‘What I Like About You,’ by the Romantics. Then they acted as if the show was over, but really they just needed a backstage water break!

The opening chords for the boys biggest hit, ‘She Looks So Perfect,’ began to play and every kid, mom, and grandpa were on their feet to close out the night with the boys. After a huge final bow and just about a million thank you’s from the boys for getting them to Madison Square Garden, they waved their last goodbye and made their way offstage.

The entire stadium took a deep breath as the lights went up, signaling the end of the best day of many of their lives. Every single time I see these guys I think it can’t get better than the last, but every single time I’m proven wrong. Sounds Live Feels Live is the tour to be at this summer, regardless of where you’re sitting or whom you’re going with!