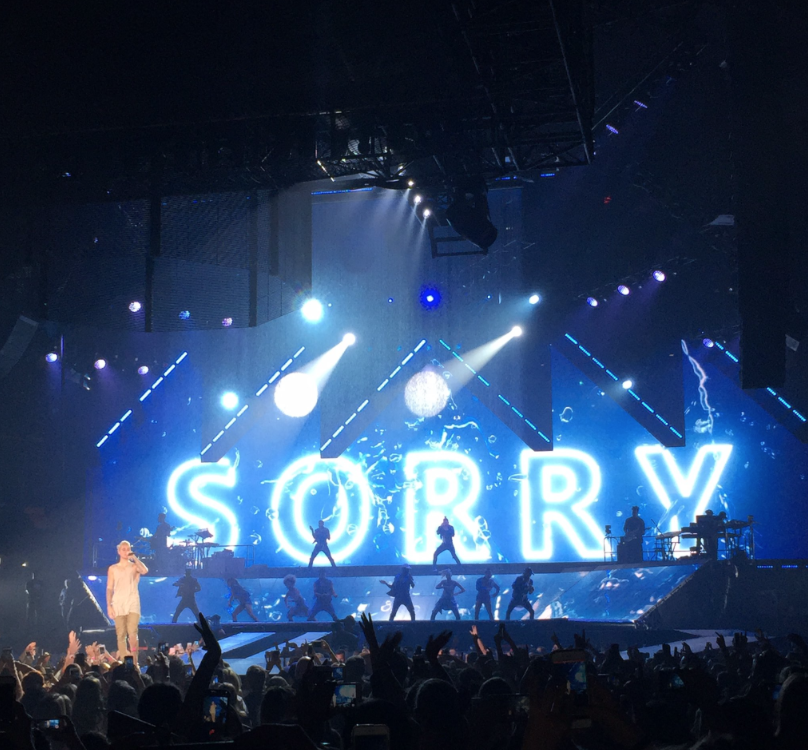 A week prior to the Justin Bieber concert on July 19th at Madison Square Garden (the final show of the first leg of the tour), I began looking for tickets, hopeful I would find good seats that weren’t too expensive. Of course, many prices were in the thousands and above so I was unable to buy them. Up until the day before the concert, tickets were still unreasonably expensive, amounts that made it impossible for me to get seats. Instead of giving up, my friend and I decided to go to the box office on the day of the show to see if anything was available.

I woke up early in the morning, not by choice, but I just couldn’t sleep! Knowing that in a couple of hours I could either be enjoying the concert or on the other hand, be sent home with no tickets at all was very stressful. My friend finally picked me up at 2:30 and we arrived at the box office of MSG at around 3:30. Lucky for us, the line wasn’t very long, which gave us a good chance of getting good seats. It was a very big weight off of our shoulders. Hours passed and the tension grew stronger between us and between all of the other girls on line waiting for tickets. Although it was just me and my friend there, I had another friend waiting at home for us to let her know if we had gotten a ticket for her or not. Of course I didn’t want to let her down because I knew how much she was looking forward to this concert, like we all were.

At 5:30 we were up next to go into the box office. The security guard moved the barricade to the side and let about 20 of us through. At this point we knew getting these tickets were definite so we ran up the stairs screaming his lyrics in excitement. When we arrived at window 17, where we would purchase our tickets my heart was beating so fast. When it was our turn my friend Kerry walked up and asked what the best seats for two were, and he said floor F. We then asked what the best seats for 3 were and once again he said floor F. We looked at each other and smiled and told the guy we would take them. After purchasing these tickets we ran away from the window screaming and crying because for many hours before this we were very doubtful that we would be able to get tickets.

The first thing we did was call up my friend. We told her we couldn’t get the tickets and that we were very sorry. The joke lasted for about 5 seconds until my friend Kerry couldn’t help herself anymore and told our other friend Macenzie to hurry and get in the car because we had just gotten her floor seats! While waiting for Macenzie to show up, Kerry and I each bought a shirt and took pictures. Our friend arrived about 45 minutes before the show but we were too excited and decided to go to our seats right away. Just like any other time I’ve seen Justin, as I heard the first song started playing I immediately started crying.

During the show I focused more on enjoying myself than recording it, and it turned out to be one of the best concerts I’ve ever been to by far. Everyone was singing and dancing so enthusiastically that I could feel the floor shaking! It was upsetting to know this was his last show of this leg of the tour and I wouldn’t be seeing him again for a while, but he made every minute worth it. I’m proud to say I’m a huge fan of his and always will be, and I’m so happy that I was able to attend his shows during this amazing tour.