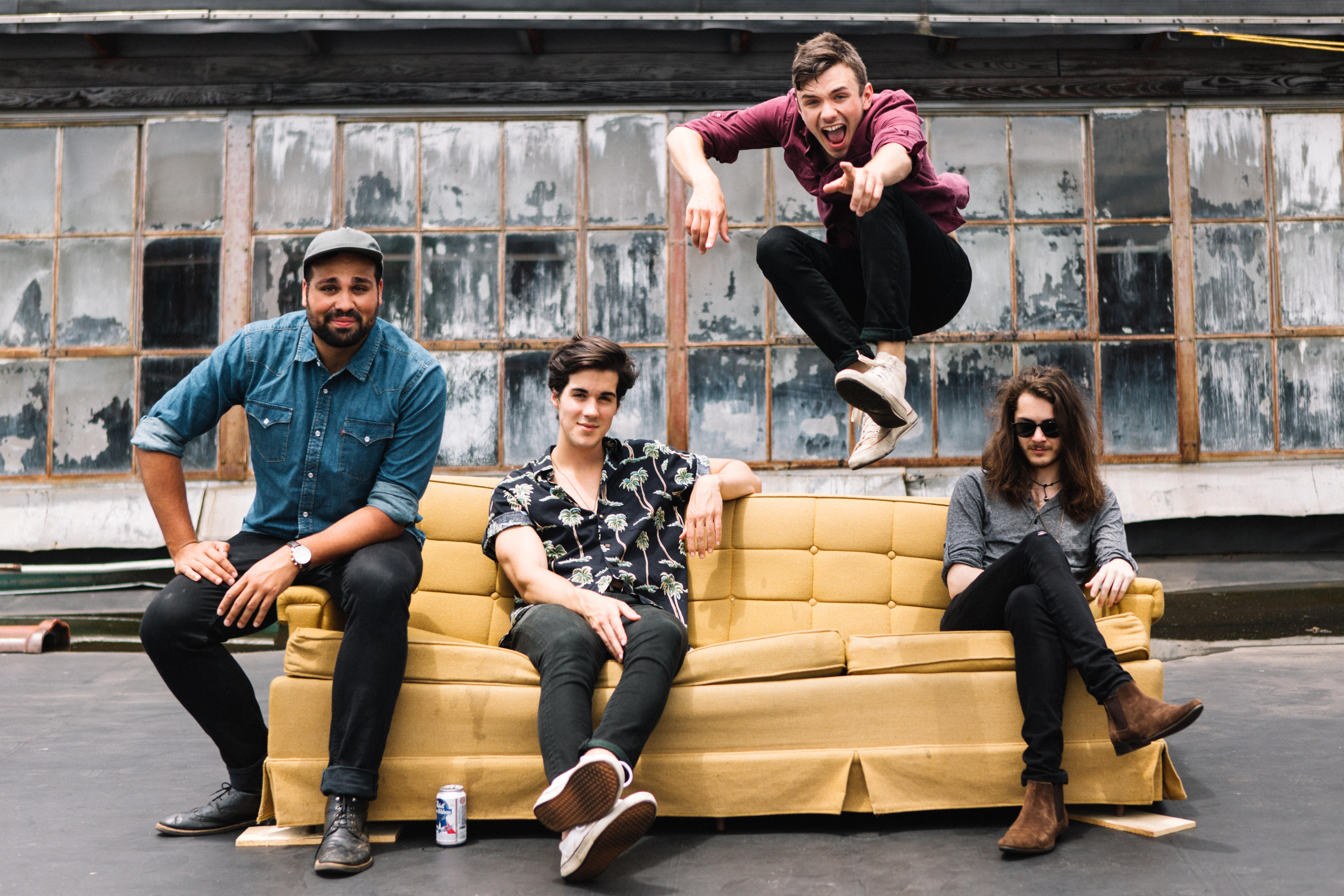 Vacation Manor formed in Lynchburg, Virginia back in 2014. The band has four members: Nathan Towles (guitar/vocals), Josh Morales (guitar/BGV’s), Dane Spearman (Bass), and Cole Young (Drums). After they all agreed to play as Nathan’s backing band for a ‘Battle of The Bands’ competition in Washington, D.C., they recognized their chemistry and decided to continue making music together. Today, they have hundreds of thousands of plays on Spotify, and lots of amazing goals for the future.

Where did you all meet and what made you decide to become a band?

Nathan: We all met at a music festival in Lynchburg, VA, where three of us were each playing in different bands at the time. When we first met, we definitely didn’t know we would be in a band together in the near future, but we did know we had a great chemistry between us.  A few months later, I needed a backing band for a ‘Battle of the Bands’ I was playing in Washington DC, and I decided to call up Dane and Cole to see if they would be interested in playing with Josh and I. Sure enough they were, and the four of us gathered in my room to work on the two songs I had written. Right after our first practice together we all realized that we had something special in front of us. The next day, we played the ‘Battle of the Bands,’ won, and decided to start Vacation Manor together.

At what point in your lives did you each know that music was something you wanted to pursue?

Cole: I personally knew after the first traveling gig I had. I was 15 years old and playing with a band of much more experienced college kids. The idea of playing music and getting to travel while doing it was so fascinating and exciting to me, and I haven’t stopped pursuing it since. Once I started playing in more bands and writing with different artists, those thoughts were only further solidified.

Nathan: For me, I haven’t had any other dreams since I was ten years old. There have been little detours throughout, and I’ve definitely questioned how realistic it is to make a career out of music, but music has always been the goal and focus in all of my major decisions.

If you had to choose a few artists that inspired your current sound, who would they be?

Nathan: Current inspirations have recently been from a wide range of artists and styles, such as Ben Howard, Brandon Flowers, Roman Candle, The Doobie Brothers, Eagles, Night Beds, and Fleetwood Mac. These influences aren’t the most noticeable on our newest EP, but have more so developed Cole and I as core musicians over the years.

When creating a song, what do you draw the most inspiration from?

Nathan: Lyrically, the theme tends to be personal experience. Musically, we believe whatever we’re consuming is going to come out in our music, so we try and keep a wide range of musical influences and hope that those work out together to create a sound that is uniquely us and expresses who we are.

What is your favorite part of the music-making process? Do you prefer creating a song in a quiet space where no one’s heard it yet, or performing live in front of a crowd to see their response?

Cole: My favorite part has always been the first step, which for us is sitting around in my basement working out a new idea. There’s a certain mystique that surrounds the beginning of a song and it’s safe to say it’s one of the most exciting times we have as a band. The most rewarding part of the creative process will always be playing it live and seeing an audience’s response, but there’s a lot a song has to go through before we add it into our set list.

Who are the biggest supporters of your band thus far?

Cole: Great question! The first people that come to mind are my parents, definitely each and every one of our recent Kickstarter backers, and countless people in Lynchburg. We have an amazing community in our hometown and they honestly mean the world to us. Pretty much anyone in the room for our first big Lynchburg show back in 2015 will come to mind when I think of biggest supporters.

What song/album are you currently listening to on repeat?

Cole: I personally have been hooked on HONNE’s new record. ‘Warm on a Cold Night’ can fit any mood or season, and I’m not even going to try and stop listening.

Cole: Making a split EP with the LANY boys is the dream. We would love to try and make the perfect summer EP with them someday. They pretty much already did it, but a man can dream anyway!

What is it like to know that several thousands of people are listening on Spotify and Itunes to the music you worked so hard to create?

Cole: It’s honestly mind blowing. I’m so thankful that so many people have been hearing our music for the first time and are still coming back to it. We worked countless hours on this EP, and went to hell and back in Nashville trying to create the best record our bodies and minds could create, and to think that so many people are listening to it excites me more than I can comprehend.

Where would you like your band to be in 5 years from now?

Nathan: It’s hard to pinpoint what you’re looking for in the future, but a solid touring schedule, a released record or two, and to be playing and writing full time are all things we’re looking for in the next few years. There’s already been so much growth for us in the past two years, so as long as this keeps up and we’re all still growing as people and musicians, it’s hard to ask for much more.

What can we expect from you, in terms of future releases, songs, EP’s, albums, live performances etc.?

Nathan: You can definitely be expecting some new shows along the east coast and music video’s as well. As far as new music goes, we’re very deep in the creation process of new songs that we’re SO excited about. However, it’s a long process that we’re still figuring it out, but new music is coming, no doubt!