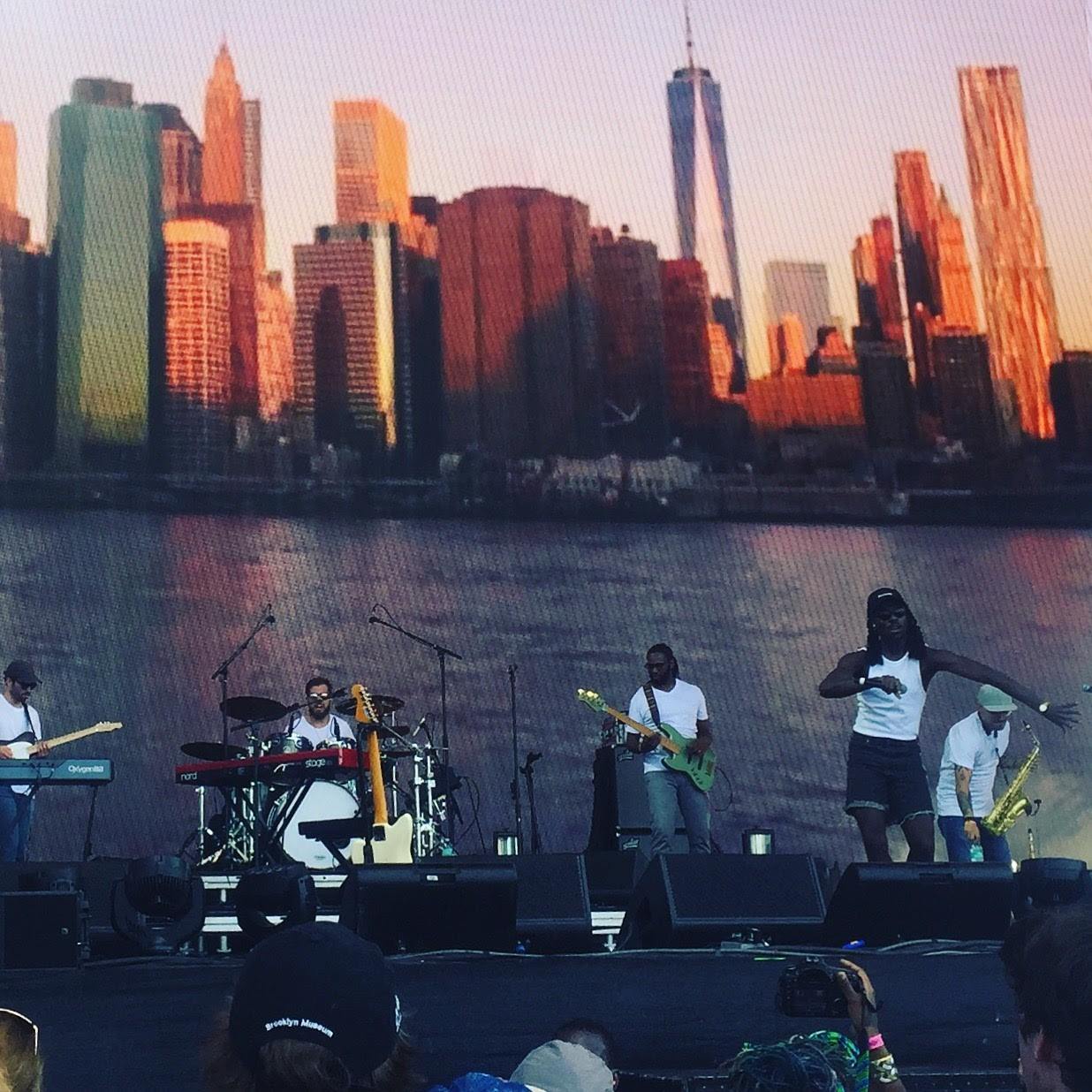 Having somehow missed out on every Governor’s Ball since it’s debut in 2011, I felt personally obligated to attend Panorama Festival. Randall’s Island would host Arcade Fire, LCD Soundsystem, FKA Twigs, Kendrick Lamar and many other familiar faces from July 21 through July 23. After a meticulous examination of the lineup, I felt confident in my decision to splurge on a single-day pass for Saturday. Anderson .Paak, KAYTRANADA, Sufjan Stevens, Blood Orange and Kendrick had all been deemed worthy of my $120, and the day seemed promising.

Fast forward to my friends and I at around 4:30 PM trudging across the RFK Bridge in 94 degree weather. It had taken what felt like an entire day to get there, and it would be followed by an equally long day at the festival itself. I had begun to accept that I was going to miss Anderson .Paak, but to be in a bad mood over something besides the sweltering heat seemed irrational.

We caught the end of Foals’ set at the main stage and pushed our way to the very front just in time for the 5:45 Blood Orange set. You might be wondering, who is Blood Orange? The people around us most certainly had no clue. This is not a blind assumption: someone actually asked me who Blood Orange was, while we were standing roughly a foot away from the stage. In addition to having to try and describe who Dev Hynes was to this confused girl, my view was obstructed by a plump, frowning, shirtless bro who did not seem pleased that his friends were adamant about being up front for The National. Despite an infuriating crowd, Dev delivered as I knew he would and I got to see one of my favorite artists perform live for the first time.

In the last two years, I had fallen in love with Cupid Deluxe (2013) and Coastal Grooves (2011). His most recent album, Freetown Sound (2016) had been the first time I ever experienced any excitement or anticipation over one of his releases. If you are unfamiliar with these projects, he has also worked with Carly Rae Jepsen, Solange and Sky Ferreira on some of their most beloved tracks. The best thing about Dev is his embodiment of all the most enjoyable elements of R&B, 80’s, jazz and electronica music and his ability to transform them into a cohesive project. Dev’s moves were as flamboyant and Prince-y as I’d hoped. When he wasn’t dancing, he had a guitar in his hand or would hop on the keyboard. The New York City skyline served as the backdrop and the two female vocalists accompanying him whisked me away into a divine state, flawlessly delivering all my favorite songs to me at last. Zuri Marley even came out — daughter of Ziggy Marley, to perform one of my favorites –the sensual, slow burning track, “Love Ya,” off Freetown Sound.

Our spirits had been lifted. After we gushed about Dev for a few minutes and got hydrated, KAYTRANADA was next. The Haitian-Canadian producer’s debut album 99.9% dropped in April and is getting all the praise it deserves. The plan was to catch the KAYTRANADA set, make our way to Sufjan Stevens after that, and then end the night with Kendrick. Sounds simple enough, right? Nope. We would soon discover that KAYTRANADA was not at a stage. The set would take place in a tent that had a mile long line outside of it. This was the definitive low point of the day. A festival should not advertise something as a STAGE if it is in a TENT. If Sufjan Stevens and Kendrick Lamar hadn’t swooped in and saved the day, I would’ve been tempted to demand my money back.

Since it couldn’t possibly get worse, we decided to get a little drunk and go to the Flosstradamus set (I am shocked that I just spelled that right on the first try). This gave me vivid flashbacks to my semi-shameful EDM-loving days, but it turned out to be a fun set. Shortly after Flosstradamus’ set, we got word that LCD Soundsystem’s James Murphy was doing a DJ set in a smaller version of one of the tents KAYTRANADA had been in. Luckily for us, we wandered into something awesome. A smokey, dark dome with lights and a FAN BLOWING. This was crucial. He played this remix I will never forget of “Here Comes the Sun,” and all of a sudden the energy was back.

Sufjan Stevens was next, and it would be my first time ever seeing him. He had impacted me from a young age due to his presence on the soundtracks for The O.C., but his most recent album, Carrie & Lowell (2015) was an ode to grief, closure and family that caught my attention in a different way over a decade later. I knew him to be quite sad sounding and I figured we would stand around and he would hop on his guitar and maybe even bore me. I have never been more wrong. Very quickly into his set it hit me that I was in the presence of a legend.

He didn’t want me to be sad, he wanted to showcase everything he was capable all crammed into an 8-song set. There were dancers and colors and even his saddest songs he would mask behind electronic jams and pretty lights. He went into auto-tune mode during the “Age of Adz” portion of his set and even gave Kanye a shout out. He used his studio-sound for “Should’ve Known Better,” and I was brought to tears. I had never cried at a  concert in all my years but as he ended with “Chicago,” tears were legitimately streaming down my face.

We were all in a trance. After the set was over, everyone was hugging the people they came with. It was just one of those moments that automatically makes you closer with the group of people you were with that day. I had gotten my $120 worth for sure. Feeling high off Sufjan’s set, we sprinted over to Kendrick Lamar, who was the final act of the day. We couldn’t get up close but it did not matter. He played the most satisfying set he could’ve played.

The set included all the big hits from Good Kid, M.A.A.D City, To Pimp A Butterfly and even included Section .80’s “A.D.H.D” as his encore. My personal “OMG” moment had to be when he played “For Sale? Interlude,” off of TPAB, the only interlude on a rap album that I have ever found myself listening to on repeat. He played Schoolboy Q’s “Collard Greens” and “That Part,” as well as two songs off his most recent project Untitled Unmastered (2016).

I’d seen Kendrick open at the Yeezus tour a few years back. He played a short set — with his most popular songs, typical for an opener — but I remembering feeling that the crowd was not aware of the level of talent he truly possessed. This solved that for me. I’m truly proud to have been a fan of him from the start.

At the end of the day I felt filled with love and respect for all of my favorite artists, the way you are supposed to feel after. The scorching heat and KAYTRANADA incident had been forgiven. Kendrick Lamar, Sufjan Stevens and Devonte Hynes gave me a day I will never forget. While Panorama’s first annual festival had it’s ups and downs, I would definitely try again next year.