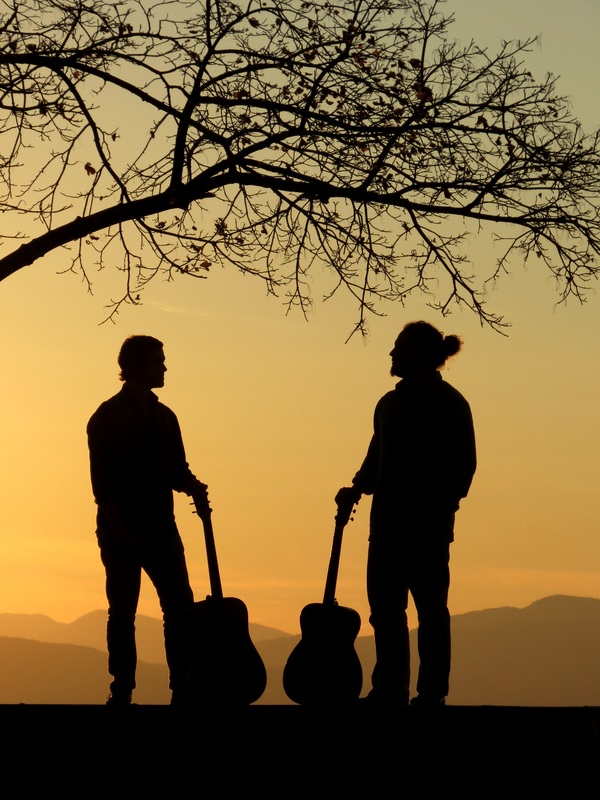 Zack (31) and Sam (25) DuPont are brothers from Newark, DE, who both share the same passion for creating music and sharing it with those who will listen. The DuPont Brothers, who are now based out of Burlington, VT, have officially been a band for three years and have spent much of their time on the road touring the Northeast, Mid Atlantic, Mid West, and Southeast. Zack and Sam share their role in the band as songwriters and co-front men, and although life on the road can sometimes get tough, the brothers continue to write more music and reach more people every day.

Since you’re brothers, how did you both discover your interest in music and what made you want to pursue it together as a duo?

Zack: We both became interested in music at different stages of life, but were surrounded by it as kids growing up in a musical home. Our mom was a folk musician in a trio for 8 odd years in the early-late seventies and was always singing in the house and playing piano. Creativity was encouraged as well as finding fun through exploring and nurturing imagination, so music came naturally to us, as did songwriting. I got into it all when I was about 17. I majored in music at St. Lawrence University, which was more of a well-rounded education from composition and world music classes to ensemble performance. Sam was living in Arizona when he was 16 and started writing songs out there as well. We ended up playing shows together around the holidays, but most of the time we would each play a set of our own music. It wasn’t until December 21, 2012, when we played our first show together as The DuPont Brothers. It was the end of the Mayan calendar; it was at nectars in Burlington, VT and afterwards, there was no looking back.

Was music a big part of your childhood, and are your parents musically involved people as well?

Zack: With our Mother being a musician, there was always lots of good music floating around the house. We grew up listening to the great songwriters of the 60’s and 70’s. Neil Young, Crosby, Stills & Nash, Joni Mitchell, James Taylor, The Beatles and Simon and Garfunkel were all there and they all sounded delightful to us. Most people assume that we started playing music together at a young age, which is actually not the case at all. We came together later in our lives to collaborate, only three years ago actually. When it’s time it’s time I suppose.

What was your first instrument and when did you start playing?

Zack: We both started on acoustic guitar. I began taking interest around age 10, and so did Sam. We each grew up with casual lessons from a local musician, Jack Marshall who was an amazing teacher. He really played to the strengths of each of his students and encouraged exploration to make the lessons really fun and relevant to what we found to be interesting about the instruments.

If you had to choose a couple of artists that inspired your current sound, who would they be?

Zack: Blake Mills has been a big influence on both of us. He’s one of my favorite guitarists, songwriters and producers these days. Sun Kil Moon, Kurt Vile, Bill Frisell, Leo Kottke, Wilco, Harry Nilson, Elliott Smith and many others have influenced us as well. These artists and their sounds aren’t really a model for the music we choose to make. They are more of a source of inspiration to get the creative wheels turning. We’re just suckers for good words first and foremost. We both believe that lyrics are the foundation for lasting songs.

When you write your songs where do you mainly get your inspiration?

Zack: I think I can speak for both of us on this one. It’s an instinctual thing for each brother and a huge part of that approach is recognizing when it’s time to sit down and write a song. We’re not academic writers by any means. It’s never a willed process. When it comes it comes and inspiration hits from many angles. They are tales either about our own experiences or about characters and concepts that are impactful enough on our emotions to inspire a purging of these thoughts and feelings. We’re just telling our story as it unfolds in front of us.

Does a favorite memory come to mind when you think of life on the road?

Sam: Consistent touring has been a huge theme in our development as a band over the past few years. It’s difficult to pinpoint a specific day or show as an all time favorite because they all seem to blend together after awhile. That’s not to say that we haven’t had specifically special shows; we certainly have. If I had to choose a time period that specifically stands alone, it would be our very first tour. There was something about being super-enthusiastic and green on that very first run for me that was especially surreal.

Does it get hard to be away from home for long periods of time? How does your family react to that aspect of your career?

Sam: The mobile lifestyle can be tough on just about anyone. Basic needs that are easily met at home like community, exercise and general self-care have to be consciously pursued to exist on the road. As we’ve continued on our path we’ve gotten better and better at discovering our needs on the road and meeting them. Our family has always been our biggest fans. We’re incredibly lucky to have their constant support and love through this sometimes turbulent process.

What would you say is your biggest career achievement so far?

Sam: Through the lifespan of The DuPont Brothers we’ve been able to share the stage with a number of our heroes, hit the road supporting some great bands and play some higher profile festivals. All that stuff is super important for development and morale, but I think our real achievement is broader and less glamorous. I’m most proud that we have continued to push for growth within our sound and outreach. Building this band with my brother is without a doubt the hardest career path I’ve chosen; it feels amazing to look back on the progress we’ve made.

Where do you hope to be in five years from now with your music?

Sam: My hope is that 5 years from now were still holding onto what has historically worked for us as band mates, brothers and humans in general. Obviously within that time we hope to continue to build our outreach and industry involvement as well, but it’s important to remain grounded, informed and realistic. For us it’s about consistent and calculated moves towards development.

What can we expect from you, in terms of future releases, songs, EP’s, albums, live performances, tours, etc.?

Sam: We seem to have found a formula that really works for us; write ALOT of songs. Since my brother and I are constantly writing new material, we have a huge well of tunes to choose from when album season comes around. Fans both old and new can expect a continuous flow of content as long as we’re a band and we can say with certainty that we won’t ever make the same record twice. We’ll always be touring so keep an eye out for us!