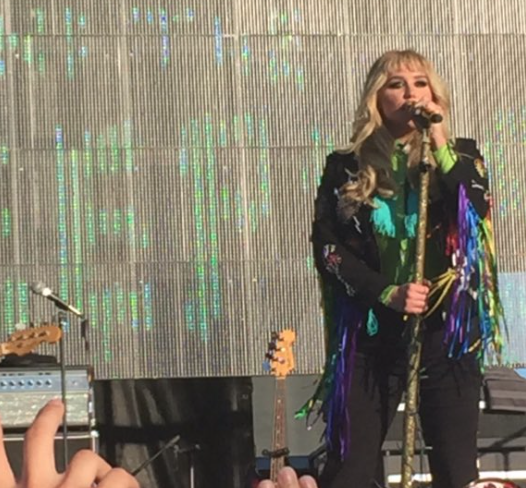 Mad Decent Block Party in Brooklyn was so much fun this year! I’ve seen Alison Wonderland live a few times before, but this time felt different. She was so close to the crowd physically, and I think it just helped her get more involved in her set than ever before. The crowd absolutely loved her and she really had a special vibe going with the crowd. I’ve never seen Dillon Francis before but always heard that his shows were crazy, so I was so excited to finally witness it for myself at MDBP. If his music alone wasn’t entertaining enough (and it was), he also had the funniest visuals playing along with his music! Dillon was friendly and talked to the crowd. He made everyone feel like they were his friends. He had us laughing, and dancing, and completely losing our minds with how fun his whole performance was! Seeing Dillon was 100% worth the wait.

I’ve seen diplo before as well, but I love him so I was so thrilled to be seeing him again, especially since he was going to be closing out the show, which meant his set would be absolutely insane! The show was wild, the crowd was wild, and the music, of course, was wild. Everyone was dancing, singing, and having the best time ever. The crowd instantly connected and became best friends. You could tell who went to MDBP last year because diplo started dropping tracks from his group, Major Lazer. I was there last year to see Major Lazer close the show, so my heart melted with happiness when Diplo performed because it was like a glimpse into the previous summer. I was there with the same friend as the year before, and you could tell everyone was just having a special moment filled with nostalgia. Day one turned out to be everything I hoped it would be! There’s no crowd like a New York crowd, but there’s definitely no New York crowd like a Brooklyn crowd!

Day two had an incredible vibe immediately when you walked in! Everyone there was ready to party! Kesha played MDBP and teased her upcoming tour as ‘Kesha and The Creepies’. It was exciting to see her because I love her music and the fact that she’s not afraid to be different. After all of the drama in the news about her I had no idea if she would be touring any time soon, so it was a treat to get to see her perform again. Kesha’s set was incredible. She had dancers come out in masks for her song, ‘Dinosaur’, and she pretended to take someone’s heart out for her song, ‘Cannibal’.

The day got even crazier as Boi1da surprised everyone with a guest appearance from Drake! The crowd went crazy because no one was expecting Drake to show up at all. He sang a few songs and left the crowd in complete shock. No one could believe their eyes! The entire experience was so amazing! Zeds dead also came out with another amazing set. It was a lot of fun and the music had everyone moving. Finally, DJ Snake took the stage and had everyone going wild. He played his new music, a few remixes, and some of his old stuff too. He also played my favorite song of his, ‘Pigalle’, three times! He had the crowd split in half to see which side had the most energy, but I was right in the middle and it just seemed like everyone was having such an amazing time! DJ Snake’s set was one giant party and the  most perfect way to end my 2016 Mad Decent experience!