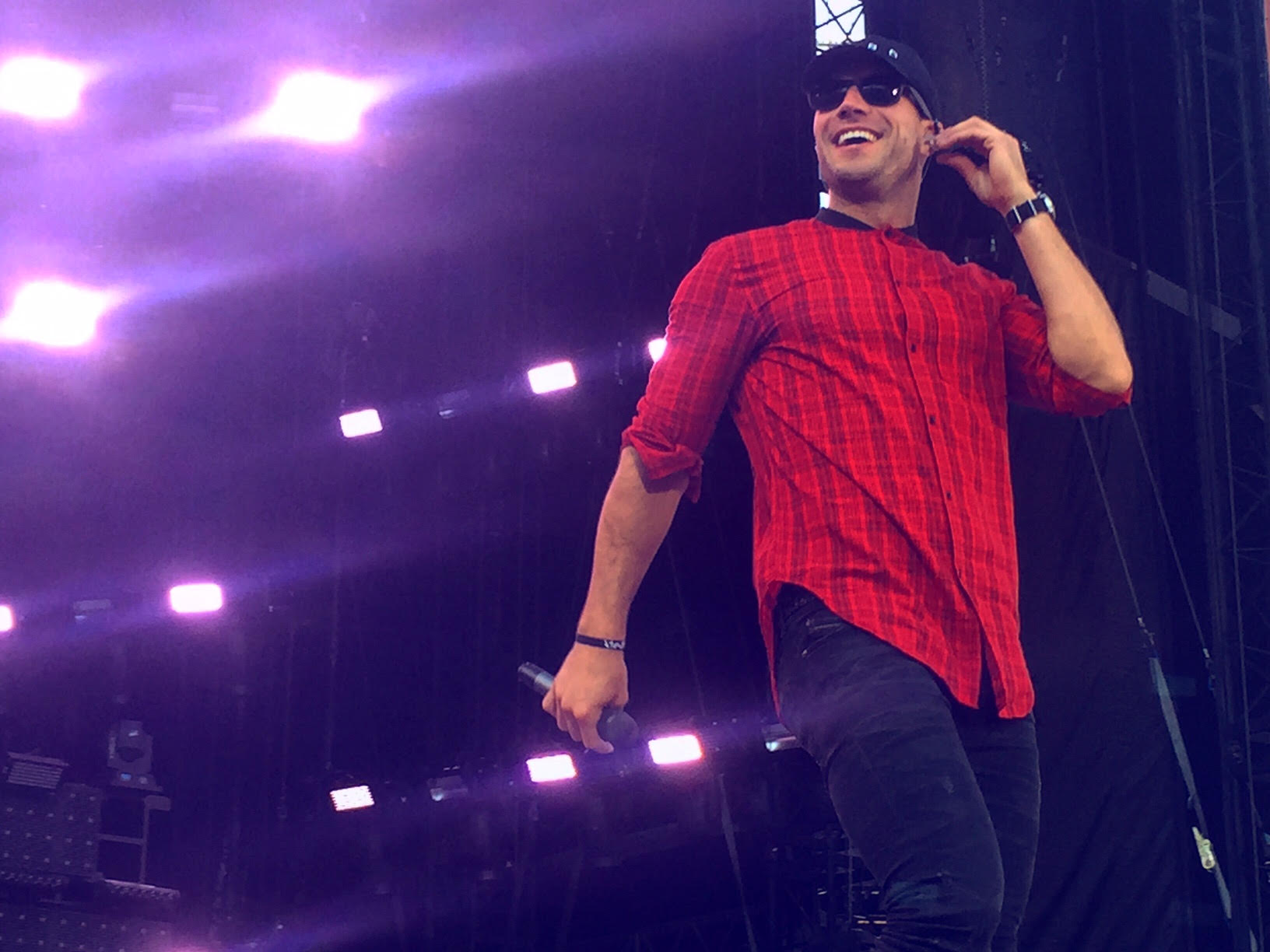 After a few months of back and forth over which show we would go to on the Spread the Love Tour to see Sam Hunt, my best friend Jen and I made the decision to go to the show at MetLife Stadium in East Rutherford, New Jersey, on Saturday, August 20th. It needed to be a weekend and the weather needed to be fairly nice (since no one wants to risk an outdoor show with a rain delay). We left Philadelphia around 1pm on Saturday afternoon and arrived in East Rutherford a little before 3pm. We made a pit stop at the StubHub local pick up location inside the Hilton (near the stadium) to see if anyone dropped off any decent tickets for a reasonable price, but they hadn’t.

We hung out in the parking lot for a bit and really enjoyed the entire #NoShoesNation Kenny fans living it up at their Saturday tailgates. Tailgates ranged in size from 2 to 20 people and those fans would put amateur partiers to shame. There were grills, there were party busses, there were flags, and even baby pools! It was really awesome but I’m terrible at volunteering to clean up so I was relieved that Jen and I stuck to pouring ourselves some mixed drinks in Starbucks cups and calling it a day.

After checking StubHub again, we ended up buying Sandbar tickets at the box office. We got in line to go inside at around 3:50pm because the gates opened at 4. Kenny Chesney’s VIP package fans were already in the Sandbar because they got early access with their packages, but there was still plenty of room inside the Sandbar when we finally reached the stage. The catwalk extended through the Sandbar and made a long “T” at the end.

The stage itself was about 8 feet high and the catwalk ramp got lower as it got closer to the end of the “T”. I’m 5′ tall (yikes) and would have never been able to see the main stage if we were standing towards the front of the stage!

Old Dominion came on at around 5:10 and their set was really great – the stadium looked a bit empty since they were the first act but everyone around us was super into their set. They opened with their song ‘Snapback,’ and it was a great song to open with! Their music is so fun for the summer and I downloaded their album right when I got home from the show!

The sun was moving closer and closer to the back of the stage through Old Dominion’s set which was a blessing since it was scorching hot in the pit. One of the girls near us had to leave for a bit because she was so overheated and dehydrated. However, she was able to sit in the shade, get water and come back to her spot before Sam, which was great. The sun and humidity is so vicious this summer, and with all the excitement at shows, it’s definitely easy to forget to hydrate.

The time between Old Dominion’s set and Sam’s set seemed to crawl; we were so excited and the sun was really draining us. Sam always has really fun music before his set so we bopped around to that and sang along to keep up our energy. The Sandbar and stadium was really filling up at this point and it just looked so cool to see so many butts in seats before Sam’s set!

Finally, Sam’s band took the stage and he came out. The stadium erupted when he took the stage and for the next 40 minutes. Sam took MetLife by a storm. I love when performers not only engage the audience, but also look like they’re having fun themselves! Sam’s infectious energy and endless engagement with the audience was the perfect combination for that hot summer night. The visuals and light show behind Sam’s band were amazing— at one point there were laser lights and a big brown bear walking across the screen. It sounds super strange but I swear, somehow it worked. That’s the magic of Sam, I guess!

Sam sang a snippet of ‘We Found Love’ right near the end of ‘We Are Tonight’, and the seamless arrangement was awesome! The crowd was so hyped on it. Also, side note: ‘We Are Tonight’ is such a wild song! Once that chorus rolls around there’s no controlling anything. “It’s a Friday night, it’s a small town girlllll!” typing this right now makes me want to punch my fist in the air and dance. What a freaking tune!

An upright piano was wheeled on stage for ‘Make You Miss Me’ and I may have told everyone around me that I was just wiping away a bit of sweat from my eyes, but I was full blown weeping into my hands! I had absolutely no chill last night. By the time ‘Break Up In A Small Town’ started, I was borderline devastated. Why was the set over already?!

Sam did an incredible job commanding the entire stadium throughout his set. I think it takes a special kind of performer to be able to go from a small room to a packed stadium and still be able to connect with the audience and make everyone feel the same energy from the first row to the last. I think Sam achieved that perfectly at this show, and it was so much fun watching him do it!

Overall, there really is no bad spot in the Sandbar! The performers really engage with the fans on both sides of the catwalk and at the end of the “T”. There were no barricades around the catwalk or at the end of the stage so everyone was right up against the stage, clapping, dancing, and singing the night away. My tip for anyone in the Sandbar would be to get your spot early and make sure you get out for a bathroom/drink run before Sam comes on. The general admission area was packed during and after his set and it took us probably 15 minutes to get out of our spot in the Sandbar last night. The tour wraps at Gillette Stadium next weekend and after last night, I have a feeling I may just end up there come next Saturday!