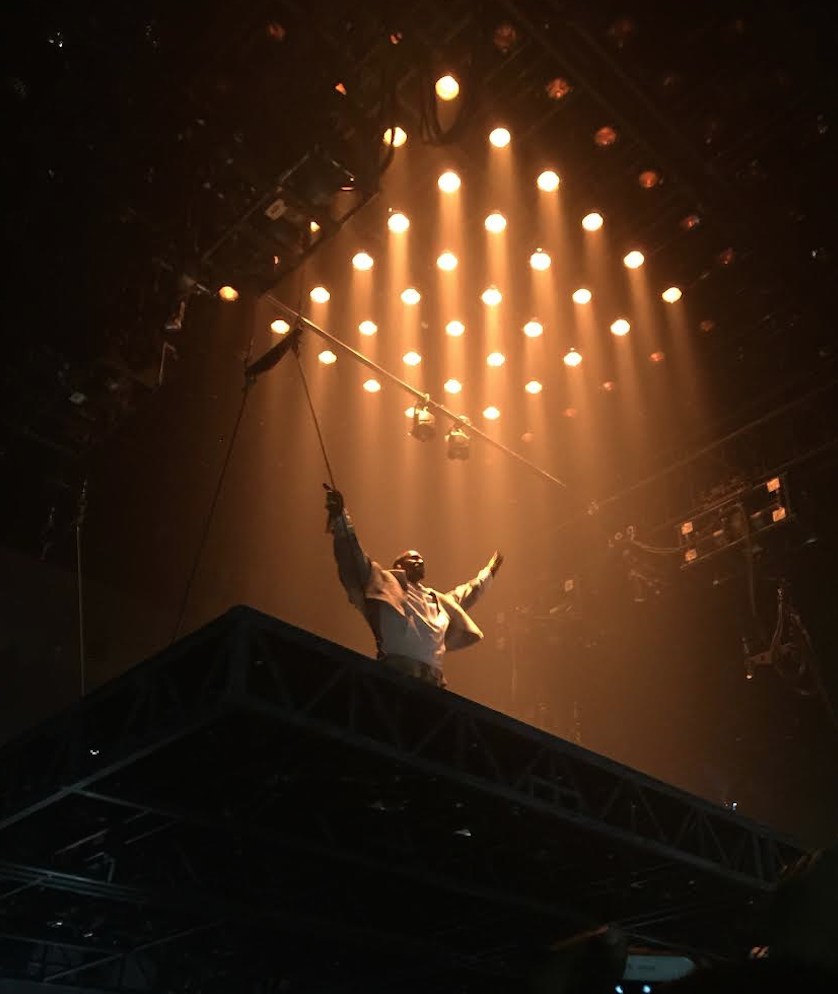 As a frequent concertgoer, I feel as though I have a solid outlook on what a great concert can be. With that said, the second night of Kanye West’s St. Pablo Tour at Madison Square Garden may have been the most incredible concert that I’ve ever seen!

The Yeezus energy could be felt upon arrival at MSG. Clusters of millennials were sporting every piece of Kanye merch possible. Some were even wearing ‘RIP Taylor Swift’ t-shirts, which were my personal favorite. I drove to New York from Connecticut and arrived right around 8pm when the show was said to start, knowing Kanye wouldn’t take to his floating chariot-like stage until around 9pm. General Admission ticket-holders had a separate entrance where they received a bracelet and had their ticket marked so they couldn’t pass it off to someone else. We entered a bar area and from there we could walk out to the floor of “The World’s Most Famous Arena”. Once I stepped out onto the floor and saw seats filled all around me and just how many people were on the floor, it hit me that I was about to see the one and only, YEEZUS!

The General Admission crowd for the St. Pablo Tour are the Kanye fans that are ready to completely lose themselves in his performance. There were Yeezy’s as far as the eye can see, St. Pablo General Admission shirts, and a constant buzz of excitement and curiosity for what Kanye had in store for his second night at The Garden. The whole time the crowd waited for him, there was loud, ambient, wordless music playing. It set a dramatic tone that something life-changing was about to overtake the arena.

The lights went black and a roar came over the whole arena like I’d never heard before. The only illumination was cell phone flashlights, and then the iconic opening of ‘Father Stretch My Hands Pt. 1’ began. Once the beat broke, the whole floor was lit up in orange light as Kanye took to the air and began to move across the floor on a platform hovering about 13 feet above the heads of those in General Admission. The floor directly beneath the floating stage was illuminated in bright yellow light and was where the heart of the mosh pit was located for the rest of the show. The bass made the whole arena feel like it was on vibrate as the snare hits would rattle your whole chest.

Kanye then went on to perform the second part of ‘Father Stretch My Hands’, and from there did a diverse set of 30 of his top songs including, ‘Black Skinhead’, ‘Blood On The Leaves’ (which was particularly powerful), ‘Jesus Walks’, ‘Waves’, and his classic, ‘Gold Digger’, which I was not expecting at all. The whole set felt like a dream. It felt like Kanye had this vision, and I, along with everyone around me, was fully submerged in what he’d imagined. There was even an intermission where the ceiling of lights rotated and lit up to the loud ambient music and made you feel like you had been transported to somewhere else. What made it feel even more like a dream was when I would be dancing my way around the floor in a whirlwind of other fans and bumped into some recognizable faces.

At an early point in the show, I was on the edge of the mosh pit found under the stage and caught an elbow in a bright green sweatshirt. I looked up to see where it came from and it turns out I was staring into the sparkling diamond teeth of artist, Travis Scott! He then spent the next three songs singing along and moshing with fans in the general admission section. Later in the concert, I was dancing and got swept up into a crowd of girls, many of whom were crying, only to turn around and be right up against a large man in all black. I peered around him to see why all these people are crying and screaming, only to see Kim K., Kendall, Scott Disick, Kylie, Tyga, Ariana Grande, LaLa Anthony, Taco of Odd Future, and their friends surrounded by towering body guards and hoards of girls losing their minds! Kanye shouted out to his wife on the floor and I made sure to get out of the area (after snapping a few blurry pictures) before it turned into Kardashian khaos. Seeing these people who are “famous” and whose outfits could pay off my college debt right in front of my face was such a crazy experience because it put them right in the general admission with myself and other fans! Only Kanye could be the one to make that possible.

Throughout the entire concert the energy was never lost. If anything, Kanye built the energy up to an all-time high right up until he closed out the concert. The song before last was ‘Fade’. The sample kicked in and the whole arena was showered with piercing red laser beams that came up from behind Kanye, turning him into a black silhouette. The effect captivated the arena. Once ‘Fade’ came to an end the entire arena went back to black and ‘Ultralight Beam’ began. At this point, I found myself and the three people around me as the only things lit up in the whole arena under one single (ultra) light beam set in the dead center of the floor. We stood there with our hands up under the light as Kanye floated on his platform alongside us looking down from the darkness as if he was a real deity. With these St. Pablo concerts, Kanye has really elevated himself to a god-like place and I’m so thankful that I got to experience it with other faithful followers of Yeezus. He made everyone in that arena feel like Pablo.