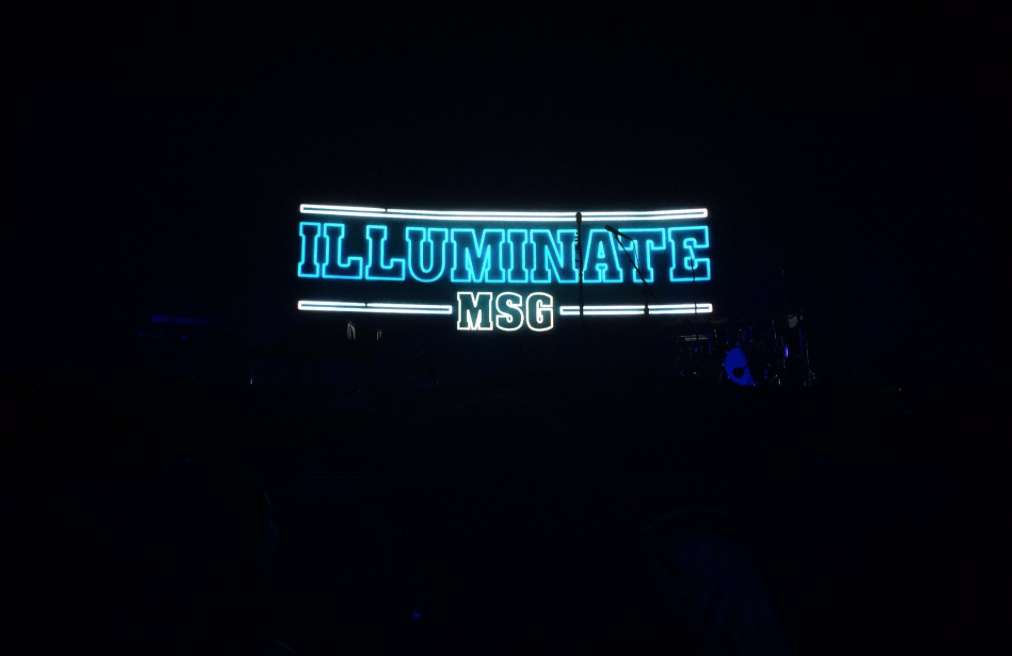 Shawn Mendes always dreamt of playing at Madison Square Garden, so I was in complete shock a couple of months ago when he announced that he would be playing there. That’s right… the person I’ve supported since the very beginning was going to be playing at the world’s most famous arena!

My Internet friend, Jenna and I (we’re friends because of Shawn) made plans to go to the show together. Our other Internet friend, Gabby, helped us purchase the tickets and we got seats in the 15th row! From that point on I was counting down the days until the show. I live in Pittsburgh, which is just about a 6-hour drive from New York City, and I left for the city at 4am on Saturday morning, the day of the show!

New York is my favorite city. I’ve only been here once before to see Shawn play at Radio City Music Hall. When I got to the city and left the subway station, the first thing I saw was Madison Square Garden right in front of me. I couldn’t believe I was in New York City at Madison Square Garden, about to see the person I’ve supported before he even had one single out, play in front of a sold out crowd!

Soon after arriving at MSG, the venue rapidly filled up. The setup inside The Garden was absolutely beautiful. The main stage had a banner that said “Illuminate MSG” going across the stage, and there was a smaller stage in the middle of the floor that had a big disco ball type thing hanging from the ceiling. I met so many more of my friends inside the arena just minutes before the show, including one from Canada that came all the way to New York just for this!

When the show started I was blown away by the amount of people in attendance. Jenna, Carley and I were screaming at the top of our lungs the whole time! It was so surreal so watch someone that we used to watch play crowds of 2,000 people play in front of a sold out show of almost 20,000! We were watching our idol live his dream right in front of us. Nothing will ever top that.

When Shawn sang ‘A Little Too Much’ I burst into tears. That song has helped me through the toughest times in my life, and watching him sing it at MSG was such an indescribable feeling. Shawn also played some new songs from his second album, Illuminate, which comes out on September 23rd! He blew the crowd away with a sneak peak of the upcoming album by singing ‘Lights On’, ‘Don’t Be A Fool’, ‘No Promises’, and ‘Bad Reputation’. Every time I try to pick a favorite I listen to one of them again and change my mind. I always seem to get lost in his music.

During the show Shawn ran to the smaller stage in the middle of the floor with all of his security. He literally ran right past me since I was sitting on the last seat of row 15, but my friends and I were too mesmerized by the disco ball on the ceiling changing colors to even notice! We were really close to the smaller stage and were so excited to see Shawn play a few songs right in front of us on the piano.

The first song that Shawn played on the small stage was a piano version of his first single, ‘Life Of The Party’. Witnessing him play his first ever song in a room full of thousands of fans made my heart numb. It’s just insane how far he’s come in so little time. During this song Shawn was facing our direction and kept looking over and smiling because of how happy and into the music we were. When he looked at us he saw three best friends brought together because of him and his music. I can’t imagine how that must feel.

The last song he played was ‘Stitches’, I always get sad when he sings it because it’s always the last song of the show and I never want it to end! The crowd was so loud and everyone sung along. There’s nothing better then listening to the entire audience sing his lyrics back to him. This was my eighth (and definitely best) Shawn Mendes concert that I’ve ever been to. I still can’t even process what I had the privilege to witness that night!

After the show, I sadly had to depart from all my friends. However, there was still one person that I had yet to meet—my best friend, Ronja. Ronja lives in Norway and flew eight hours on a plane for the show. We planned to meet before the show but there were too many people crammed together so we were unable to find each other. She texted me and told me to meet her at an Italian restaurant a block away from the venue. I don’t think I’ve ever hugged anyone so tight. It’s so special to meet one of your best friends for the first time, especially since Shawn was what brought us together in the first place!

Ronja and I talked about the show and explored New York City for hours! It’s incredible how people from Pennsylvania and Norway can come together in one of the biggest cities just to see their favorite musician. September 10th is a day I’ll never forget. It was full of laughter, tears, and memories that will last a lifetime. I can’t thank Shawn enough for everything he’s done for me, and all of the great friendships he’s brought into my life. I can’t wait for everything that the future holds for him, and I know that in 30 years from now I’ll still be jamming my heart out to ‘Something Big’.