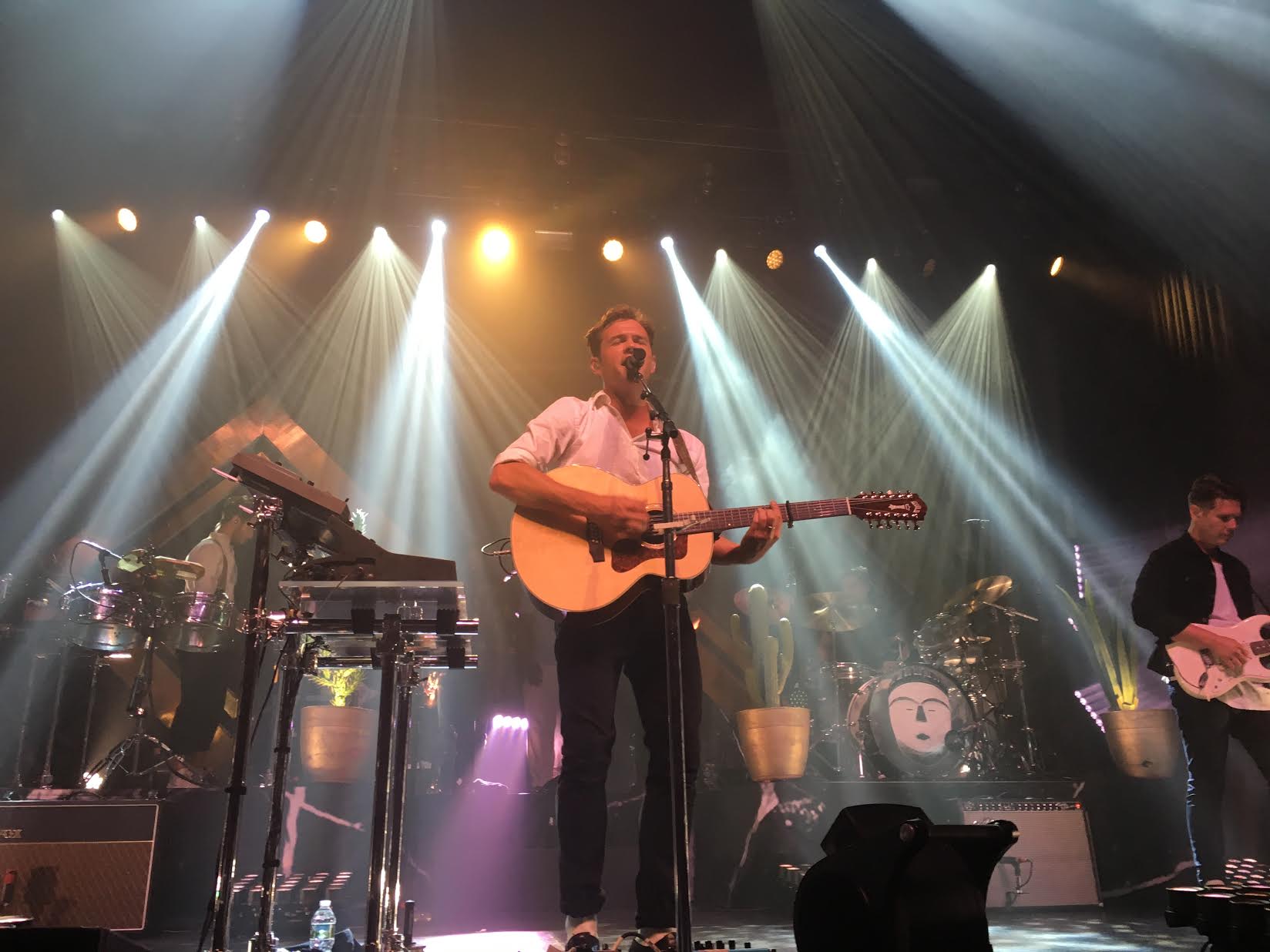 I love music and going to concerts, but I especially enjoy Pop and Synthpop concerts the most. One Synthpop group I discovered a few months ago was St. Lucia. I fell head over heels in musical bliss for their song ‘Dancing On Glass’. When I heard they were going out for a fall tour I immediately got my ticket to see them at Terminal 5 in New York City on September 20th. I knew the show was going to be great because St. Lucia have incredible music, but what I was not expecting was for it to be the best concert I have ever been to.

The greatness of the show started before I even got inside the venue. While waiting on line I met three diehard St. Lucia fans. Their excitement to see their favorite band made me even more excited for the show. We all, also, happened to be the first group of people at the front of the line which meant that when the doors opened we would get first dibs at the best places to stand for the show. In all my years of going to concerts I have never even been close enough to see the acts at all, so when the four of us got into the venue and I was standing front and center I thought I died and went to concert heaven! I couldn’t believe I was going to be right in front of Jean Grobler, the lead singer of St. Lucia, as he sang some of my favorite songs!

The opening act was a Synthpop duo called SofiTukker. Normally opening acts can be a bit boring especially when you have a bunch of crazy energy while waiting for your band to come on. SofiTukker turned out to be one of the better opening acts I have seen at a show. Sophie’s guitar playing was killer and one of the highlights of the night. Do yourself a favor and look up their songs ‘Hey Lion’ and ‘Awoo’. You’ll very happily have those songs stuck in your head all day.

When St. Lucia came out on stage there was an energetic surge going through the crowd that I’ve never felt before. Maybe it was because I was right in the front with Jean only a few feet in front of me, or maybe it was just that their music gets people so pumped. Whatever that energy surge was and wherever it came from, it was intoxicating!

St. Lucia performed so many of their fantastic songs. About three or four songs into their set they sang ‘Dancing On Glass’. I’d been waiting to hear that song live ever since I bought my ticket. I don’t think I’ve ever been more excited to hear a song live, other than when I got to see Kelly Clarkson and she sang ‘Since U Been Gone’! When the opening to the song started playing I screamed out in excitement and started dancing as if I was back in my room jamming to the song alone. Only this time I was with hundreds of others and we were all enjoying the song at the same time.

A few songs later the band took things down a notch. Jean performed an acoustic solo version of ‘Call Me Up’. I’m normally not a fan of when songs are scaled down and played acoustically but there’s just something about Jean’s voice and his presence on stage that made me enjoy hearing this stripped down version of one of my favorite songs by them. During ‘Love Somebody’, Jean jumped off the stage and walked through the crowd, and then jumped back on stage to finish the song.

The last song before the encore was the insanely danceable, incredibly energetic ‘Physical’. Besides ‘Dancing On Glass’, I was most excited to hear ‘Physical’ live. it’s just one of those songs that all you want to do is jump around and dance like a maniac…and that’s what I did at the show! Jean and the band go absolutely crazy performing this song. He jumps all over the stage in between singing the song and even gets chased by his bandmate Nick Paul. The energy of the crowd and the band during that song was more than I can describe in words. I felt the floor vibrating every time the chorus came started from the crowd jumping around. I honestly don’t think I have ever had as much fun hearing a song live and seeing a band perform one of their songs than I did during ‘Physical’. It definitely left me wanting to hear it and dance like a maniac all over again!

St. Lucia closed the show with their hit ‘Elevate’. Although it is one of their mellower and slower songs, it was a great song to end the show with. Even though the show was over my St. Lucia-filled night did not end. My diehard fan friends decided they were going to wait to meet the band. Of course I was going to wait with them! There was no way in hell after that incredible show I was going to possibly miss out on meeting the band. For a while there were just six fans waiting for the band and then it was just the four of us left. We waited for well over an hour but it was completely worth it! I got to take a picture with Jean and Patti Beranek. And as much as I hate to admit it I fangirled and I rambled to Jean and Patti that I absolutely loved hearing ‘Dancing on Glass’ and ‘Physical’ live. Earlier, someone had come out of a VIP meeting with the band and for some reason gave us their sticker. When I met Patti and Jean I had them sign the sticker, which is something I will treasure forever.

I have been to many concerts throughout the years, and all of those past concerts have been great but none of them will ever be able to compare to seeing St. Lucia. I was never in a million years expecting to have a place at the front and center of the stage and I never, ever expected to meet the band! They put on such a fantastic show. I have never felt such energy at a concert from the songs and the band before. I have never felt more excitement and admiration for a band or singer before either. St. Lucia at Terminal 5 on September 20, 2016 will be one of the highlights of not only my concert experiences, but also my life!