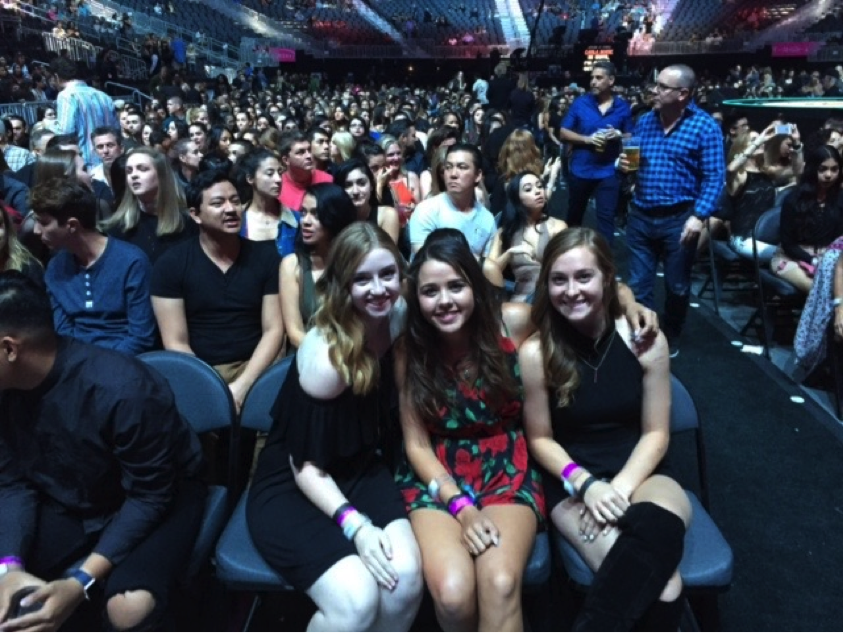 DRAKE. ONE REPUBLIC. U2. SIA. BILLY IDOL. TWENTY-ONE PILOTS. SAM HUNT. Phenomenal artists, right? It would be cool to see them all in one night, but that’s not possible, is it? If you said no, think again.

On Friday September 23, IHeartRadio hosted night one of a huge 2-day music festival at the newly opened T-Mobile Arena in Las Vegas, and I was lucky enough to score FREE seat filler tickets from 1iota.

For those who may not know, 1iota is an online audience-casting agency. Anyone can go to their website www.1iota.com and request tickets for numerous shows. If a show is in popular demand, each request goes into what is called a ticket lottery. The lottery randomly processes requests and will notify the users who have been approved for tickets.

On Tuesday, September 21st, just 3 days before the IHeart Music Festival, my friends Erin, Caitlin, and I were approved as seat fillers. None of us had been actual seat fillers before so we had no idea what to expect upon arrival.

The morning of Friday, September 23rd, we left our apartment at 7am for a 4-hour car ride to Las Vegas. Our planning for the trip had been so unorganized and hectic that we were all in disbelief the trip actually happened. Our lack of plans and money would have kept nearly anybody else from going, but we could not miss out on this opportunity – no matter what the cost.

We were advised to check in to the festival no later than 5pm, but (being the anxious early bird that I am) arrived with my friends around 3:45pm. At this time, there were probably a good 50-75 people ahead of us. Around 4:30pm, the seat fillers came in by the hundreds. It was getting crazy and we were so eager to get inside. Although we had to battle the heat for 2 hours while we waited to be processed through the line, it would all be worth it in the end.

It’s now 6pm. We were finally inside. After 3 days of excitement, 4 hours of driving, minimal sleep, and terrible planning, we had made it.

The next decision Caitlin, Erin, and I made was pivotal in this becoming a night we will never forget. We decided to use the restroom. Yes, I know, you probably were not expecting that type of response. Shouldn’t we have stayed in our spot so we could get the closest seats possible?

By the time we had left the restroom, more people had been processed through the line and were being seated. Essentially, this meant that we had “lost our position.” As we made our way inside the arena, a 1iota staff member asked us how many were in our party. We told her 3, and walked with her as she led us to the front row.

THE FRONT ROW. WE WERE SHOOK.

This happened all around 6pm, and we had an hour and a half until show time. On numerous occasions, we were advised not to get too excited over our seats. As a seat filler, our job is to “fill the seat” until the actual people who bought them come to claim them. Once they do so, we would be directed to a different area.

We watched, with our hearts racing and palms sweating, almost our entire section relocated. Some people made it through 2-3 acts before their seat holder came, but somehow, we were blessed and whoever bought our seats never came.

The front row was reserved for wealthy people and celebrity viewing. Simply put, 21- year old broke college students did not fit the mold. We became friends with this insanely nice family sitting next to us – and they invited us to stand at the barricade with them.

Just when we thought it was impossible to get any closer, we got closer. We spent the night against the barricade, taking in how surreal this all was.

Each act put on a solid performance, but we were specifically hyped to see Twenty One Pilots, Sam Hunt, and Drake.

Here are some highlights:

… And that’s a wrap. Vegas was incredible; I wish I could re-live it. I advise everyone to use 1iota for events like this – you never know what amazing things could happen. Hopefully, next time, it’s you front row seeing your favorite artist(s) perform.