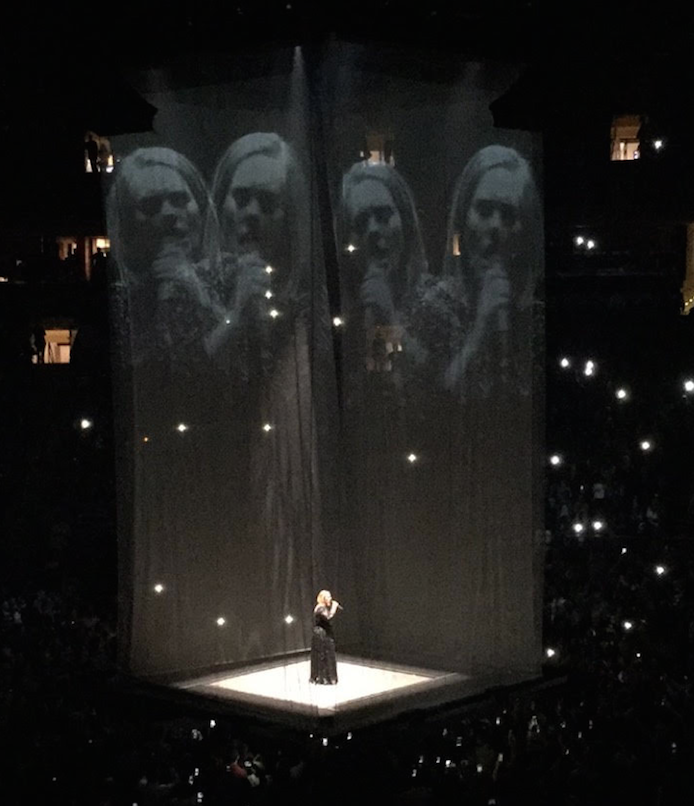 I remember hearing Adele for the first time back in 2008 on Saturday Night Live. She sang ‘Chasing Pavements’ and I was instantly drawn to her voice. When ‘Rolling in the Deep’ came out, I found myself playing it over and over again. My whole family loves Adele and my brother and I often fought and still fight over who introduced our father to her music (it was me!).

It was Christmas of 2015 and it was my brother’s turn to give his gifts. He told us that he was getting the both of us Adele tickets, and wanted us to help him pick out our seats. We were ecstatic! The concert being 9 months away felt like an eternity, but let me tell you—it was worth the wait!

The Adele show that we went to was on Monday, September 26, at Madison Square Garden in New York City. It was her final show of 6 that she played there and it was completely sold out. My sister and I arrived an hour early and the energy in the lobby was overwhelming. Everyone was filled with joy and excitement for the night ahead.

We finally headed into the arena and there were two stages, a small one in the center and a bigger stage to the side with a huge screen. On the screen were Adele’s closed signature eyes (with that thick winged black eyeliner and bold eyelashes). Around 8:15pm the lights went off and I heard music starting to play. On the big screen, Adele’s eyes opened and everyone started screaming. I heard, ‘Hello’ in Adele’s voice, and the eyes on the screen closed and opened once again. Adele slowly rose from the smaller stage while the piano played ‘Hello’.

There were fans that came from all over and who were of all ages. People travelled from every corner of the United States, Peru, South London and even Australia to see her play at The Garden. I even heard a college-aged student say that she spent all of her savings just for a ticket!

Adele spoke to the audience a lot throughout the show and she asked everyone to scream if they got their tickets for Christmas last year. My sister and I screamed and Adele said, “Ho Ho Ho, Here I am!” She asked if people were there for their anniversary and she acknowledged a couple that were married for 20 years. She asked about people coming to the show for their birthday. A girl was there for her 21st so Adele had the crowd sing ‘Happy Birthday’ along with her. The cutest part was when she brought up two young sisters along with their mother and grandmother and took a few selfies with them!

Adele began the show with her upbeat songs like ‘Rumor Has It’, and then would get into the emotional, deep ballads, with an acoustic version of Bob Dylan’s ‘Make You Feel My Love’ in between. During gaps in the show she shared a lot of interesting stories while she drank warm honey. She told us how a fan told her to “hurry up” at the concert before because of how much she talked. She discussed how she gets conflicted because she is in a new relationship while singing about her ex boyfriend. She also mentioned almost missing out on a Grammy because she was hesitant while making ‘Skyfall’. I cracked up when she mentioned that she couldn’t say “hello” on the phone anymore because her friends think they are being pranked. Other topics she mentioned were her throat surgery, an obsession with Alison Krauss, how much she misses her friends, and how she loved being pregnant but wouldn’t walk red carpets because she felt insecure.

She walked back to the smaller stage in the center and some lucky members of the crowd got selfies with her. She was doing lunges and chatting with people, and one person was even trying to FaceTime someone and the person didn’t answer. Adele jokingly said, “that person will sure regret missing that call, won’t they?” I loved how she acknowledged her fans, even the ones at the very top, making sure they got spotlights put on them so she can see them.

After all of that she sang ‘Someone Like You’ and ‘Set Fire to the Rain’, and there was rain falling all around her. After those two songs she thanked the audience and disappeared from the stage. The crowd began chanting “Encore! Encore!” and a few minutes later Adele came back out again. She sang  ‘When We Were Young’ and ended the show with ‘Rolling in the Deep’.  The crowd danced and sang along as confetti of paper with Adele’s own handwriting fell all around them. Some of the confetti I caught said, “I like in the city when two worlds collide”, “hello,” and “it matters how this ends.”

Overall, Adele was so entertaining from start to finish. I really appreciated the simplicity and intimacy of her performance. It was so refreshing to be at a concert that didn’t have so many distractions and that feeling of not knowing where to look. It was just her, center stage with nothing to hide. She had her wonderful band behind her and that amazing voice with no auto-tune or enhancements. She played what her fans wanted to hear and reassured the crowd that she always will. My sister and I left and talked about the concert the whole ride home.

One thought on “Adele: “It Was Just Her, Center Stage With Nothing To Hide””