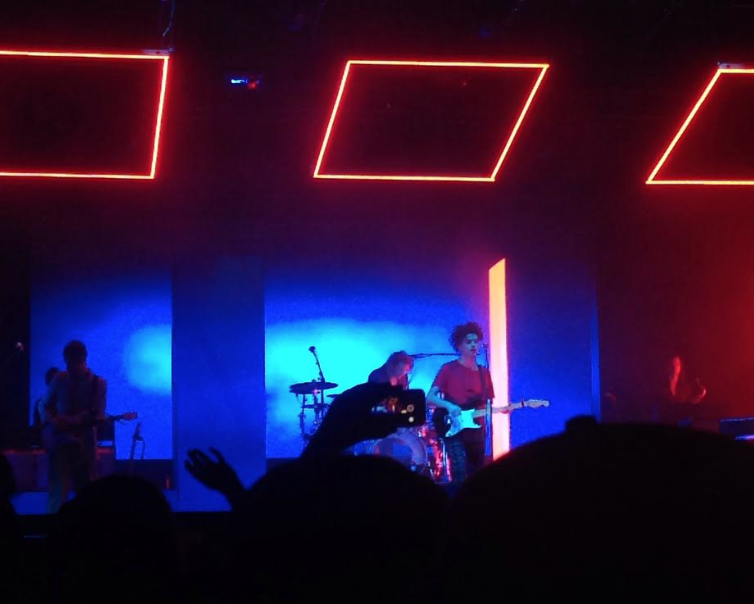 I attend college in Manhattan and when word of The Meadows Music Festival got out, a few of my friends and I talked about going but never really committed. Then, one by one we broke down and bought tickets! Being a huge 1975 and Cage The Elephant fan, I was super stoked to see them both live. I was also really hyped to see Kanye West. However, one of my favorite sets was quite a surprise!

The first band we saw was Coast Modern. I first discovered them on The Meadows app and decided to check them out because they had really cool album artwork. When I actually saw them live I was completely blown away. They had really high energy that everyone in the crowd fed off of. They also interacted with the crowd a lot throughout their performance. At one point during their song, ‘Hollow Life’, the lead singer stopped and asked the crowd “Do you want to hear a knock knock joke?” The crowd responded with an excited “Yes.” He said, “Knock. Knock.” and when we asked, “Who’s there?” He followed with the line “It’s all an illusion.” It was so unexpected, well executed, and totally awesome! I personally love their beachy vibe, and a few of my friends actually bumped into them walking around later on in the day! Sadly, I missed them because I was buying an ice cream sandwich. I’m not complaining though, the ice cream was really, really good!

After catching pieces of a few other artists such as The Temper Trap and Jack Garratt, we headed over to see Mac Miller. We danced all through his set until it was time for Cage The Elephant. We got pretty close to the stage and it was wild. They have so much energy and everyone was jumping around like crazy. Also, the band made their way in and out of the crowd a lot. My favorite song they performed was ‘Trouble’, and seeing it live was a great experience. Everyone went crazy during ‘Ain’t No Rest For The Wicked’, and I couldn’t see a single person in the crowd who wasn’t jumping and singing along.

We sprinted from Cage to The 1975’s performance. The crowd was tightly squished together, and it felt like every single person at the festival wanted to see them. Their lighting and backdrop added a lot to their performance. I particularly loved when they performed their deeper songs like ‘If I Believe You’ and ‘Loving Someone’. It was really intimate and the whole crowd sang along with the band. Then, the energy picked up for their upbeat songs like ‘Girls’ and ‘Sex’. The 1975 was definitely a highlight of the weekend for me.

The last act we saw was Kanye. Again, it felt like everyone at the whole festival was there. But it’s Kanye, so I didn’t expect anything else. I enjoyed the firework show that he opened with, and he danced a lot throughout his set. Unfortunately, he had to leave early so we bolted for the exit and tired to beat the crowd to the train. Although we didn’t have a terribly shaken up wife to get back to like Kanye did, we still had to get home and prepare for class the next day. I even had an exam! Yes, it probably wasn’t the smartest idea to go to a festival the day before an exam, but it was so worth it! I was still reeling from the excitement of the weekend and hummed Cage The Elephant and The 1975 songs all day.

One thought on “The Meadows Music Festival”