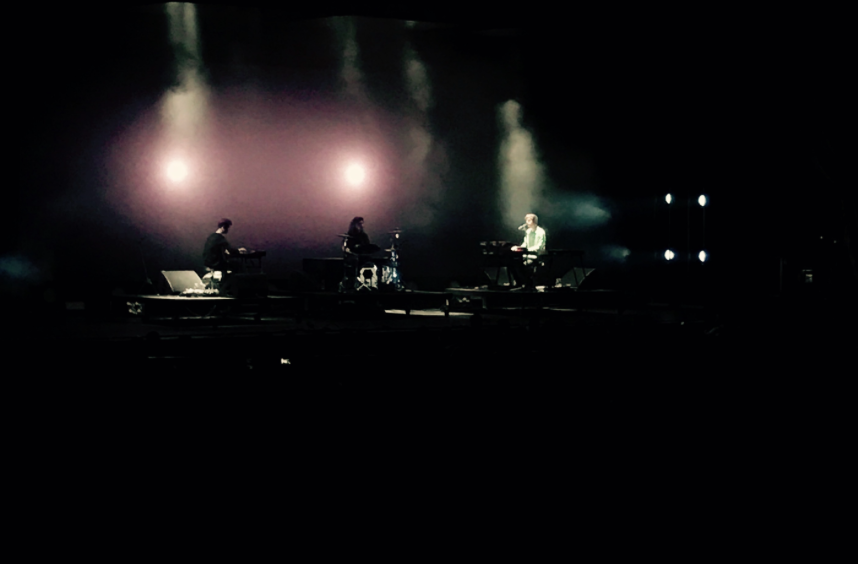 About three-quarters of the way through his set at Radio City Music Hall the English singer, keyboardist, and producer James Blake spoke to the crowd about what an honor it was to be playing at the famous venue and that it had taken many years for his trio (with Benjamin Assiter on drums and Rob McAndrews on guitar and sampler) to reach this level of performing electronic music live. Explaining the challenge he and his bandmates face when they perform, Blake said “we’ve chosen the path of most resistance: everything is live–no laptops, no Ableton.” (Ableton Live is a popular music software used for performing electronic music.) The audience cheered–Blake doesn’t talk a lot at his shows and it was nice to hear his voice–but they probably had little idea how this band performs. The division of musical labor seems to be that Blake sings and plays keyboards, dividing his time between piano and synthetic synthesizer chord washes; Assiter plays a mostly electronic drum set, triggering pummeling sine tone kick drum sounds and Roland TR-808-type hand claps instead of acoustic percussion; and McAndrews plays electric guitar here and there, but is equally busy adding soundscapes to the mix and live sampling Blake’s voice to thicken it and add more layers of counterpoint.

When Blake explained that he and his band had chosen the path of most resistance, he was referring to their goal of evoking the sound and power of electronic (dance) music by old-fashioned means: playing instruments. Part of the thrill of watching them play is wondering how they’re making the sounds, a few of which stand out: the rib-cage rattling kick drum, the vocal samples I could see being drummed out on an electronic drum pad controller, the vocal doubling harmonies that appeared out of nowhere behind Blake’s singing, and finally, all that narly bass played by Blake’s left hand. It still astonishes me how much low-end frequencies modern sound systems deliver. Bass is one of the main signifiers of music now, having reached new depths of tactility and visceral affect. It can have a physical effect independent of what you may think of the music itself.

Musically, Blake’s band gave us the best of multiple stylistic worlds. They can create hard-hitting electronic textures that build and build. At one point the music soared into the only 4/4 techno beat on the night and suddenly the entire crowd was standing. But then a quiet piano piece came and we all sat down again. Blake also writes very harmonically compelling songs, so if nothing else you can be carried away by his chords that toe the line between evoking soulful-gospel-church music and ECM/Keith Jarrett quietudes. In many ways Blake’s is a minimal kind of music too, where a typical song is a skeletal snare backbeat, a keyboard wash, voice, and a faint soundscape. What he excels at is giving you endless reasons to listen closely, and his concert was full of moments when the audience’s hush registered the music’s patience and depth. Partly that’s due to his beautiful and falsetto-heavy singing, and partly due to the tight song arrangements that keep you guessing what will happen next. On our way out my wife asked me how I would categorize the music and I said I had no idea. Blake is a composer positioned at the intersection of ambient, gospel, and soul as well as various UK underground dance and bass music styles, but he’s always doing his own, very distinctive thing.