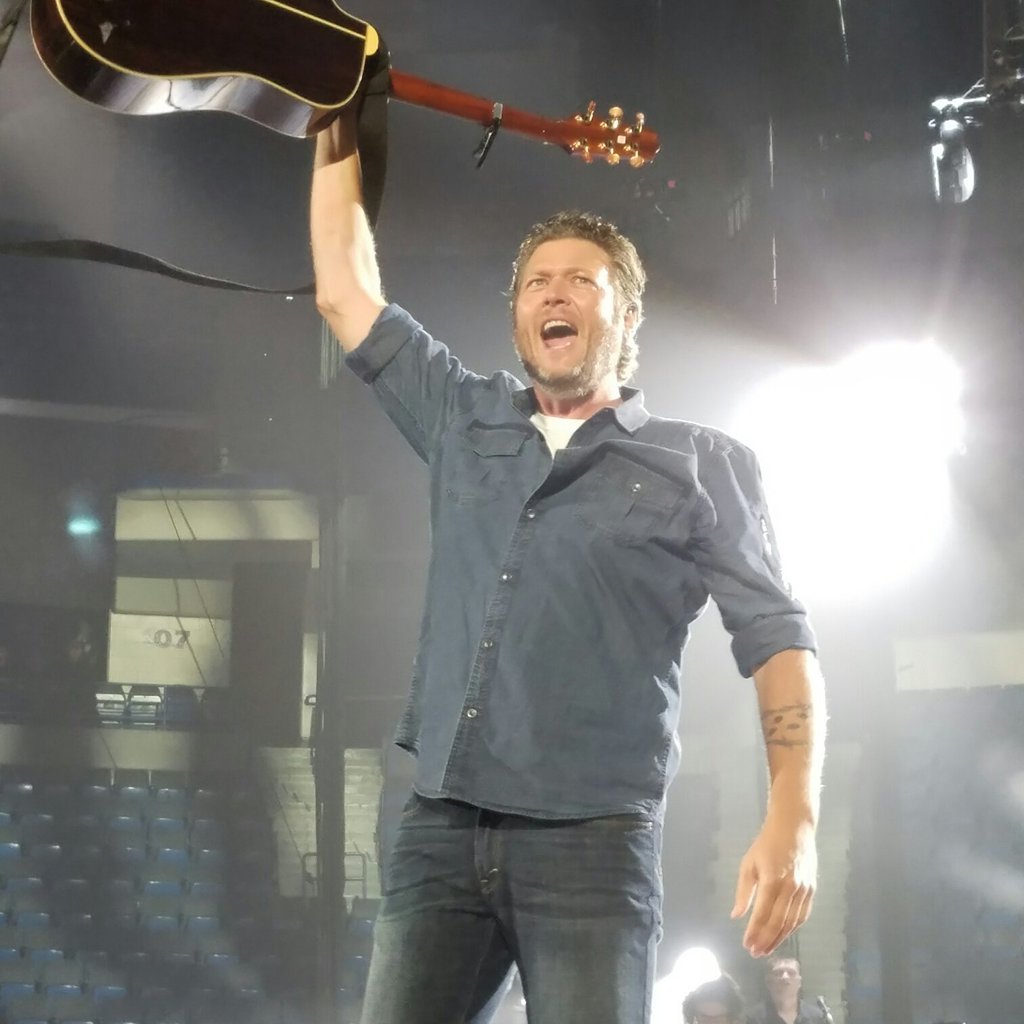 The minute I saw the locations and dates for Blake Shelton’s fall 2016 tour, I felt the excitement start to build inside of me. The tour would include venues in the Northeast, including Hartford in my home state of Connecticut! I immediately knew the call I had to make.

My friend Fran and I met via the magic of social media; we were both Blake fans that met on Twitter. In August of 2015, when it was announced he would be part of a special lineup at the Grand Ole Opry, we each bought a ticket and finally got to meet in person. We immediately felt like we’d known each other forever and since Fran lives just outside of Nashville, I’ve had the opportunity to visit her a few times since. In fact, just this past March we had gone to see—you guessed it—Blake Shelton at the Bridgestone Arena for two nights in a row! Hmm… maybe we really are crazed Blake fans (did I mention we each have a Blake signed tattoo?). At any rate, this was the perfect time for Fran to visit Connecticut!

When the Hartford tickets went on sale I was ready, password in hand and credit card stored on the Ticketmaster. The minute they went on sale I gleefully secured 2 tickets to Blake’s pre-show VIP Experience, which included two premium seats to the concert.

The day finally arrived and when we arrived at the XL Center I picked up our tickets at will call. We eagerly joined the very short line for the VIP Experience, certain that we would have a great spot right up front to see Blake’s performance. We soon learned of a new twist; those who purchased the most expensive platinum package would get to enter first in their own separate line. It was a bummer for us, but great news for them!

I left Fran in line for a bit so I could go check out the crowd-free merchandise shopping. I quickly settled on a few items and I learned from the merchandise worker that I just missed Blake running laps around the arena. Now that would have been a video to share!

When I was back in line and waiting for the doors to open I spotted another Twitter pal, Quinn. She’s another Blake fanatic who made the trip from Albany to get to be part of a VIP show. I then heard a voice with a beautiful English accent say “Susan is that you?” I realized it was Emily from the U.K., a buddy of mine from Instagram! She travelled from England to see Blake at his shows and was staying in America to later attend Gwen Stefani’s shows in L.A. There’s no feeling like finally getting to meet in person after getting to know each other through social media! Photos were taken of all of us together and one that I tweeted ended up on the arena’s big screen before the show!

Finally, we were escorted to the hallowed ground dubbed, ‘The BSers Lounge,’ home of the VIP Experience. We passed by Blake’s tour bus and quickly nabbed our spots right of center stage, 4 rows back. More waiting ensued, so we got to know our neighbors and used our free drink tickets to indulge in a vodka and lemon-lime soda concoction, which is a favorite of Blake’s. As 5:45pm neared we gulped them down, needing to free our hands for taking photos, videos, and in Fran’s case, Periscoping for fans all around the country!

When Blake came out he was greeted with a thunderous applause and high-pitched screams. He proceeded to charm the crowd with witty answers to fan submitted questions and velvet-smooth vocals. Blake talked about eating sushi with Jimmy Fallon, his best birthday memory, and of course, The Voice. I just had to yell “Is Gwen coming back for Season 12?” I think hearing Gwen’s name got his attention and I repeated my question. Blake replied with a smile, “well, I’m not allowed to say but I hope Adam’s not back!” He also noticed my friend Emily, who was holding up her country’s flag. When he heard how far she travelled for the show he said, “I love you”. Talk about a thrill!

In between the Q&A was a three-song Blake performance with just his voice and a guitar. We were blessed with performances of ‘Doing What She Likes,’ ‘Sangria’ and ‘Home’, which was definitely an audience favorite. When he was done we had plenty of time for photo ops in The Voice big red chair and with life-sized Blake cutouts.

Now it was time for the concert. We made our way to our seats just a few minutes before Blake came on stage. As expected we found ourselves in the second row, to the right of center stage, but we were able to stand right up against the stage for the entire show! We had the perfect view of the tall, dimpled cowboy!

Just past 8:30pm we were met with the sight and sound of a simulated tornado from a very tall structure on the stage. This had the crowd on their feet in anticipation, and was followed by a huge neon silhouette of Blake himself. He walked out, guitar in hand, with a huge grin on his face. He performed ‘Neon Lights’ above the screams from the crowd. The opening song was followed by nearly two hours of hits. As Blake said, “when I go to a concert I want to hear the songs I know.” He did two songs off his latest album, which were ‘Came Here To Forget’ and the cheeky yet pointed, ‘She’s Got A Way With Words,’ which became a crowd sing-along. Personally, I was hoping we’d get the first performance of the new single, ‘A Guy With A Girl,’ but he must be saving that one for the next tour.

Throughout the show Blake made use of the entire stage and long catwalk. He was so interactive with the crowd, making direct eye contact or engaging in banter. He begged the crowd to accompany him on certain songs and then critiqued our efforts. He sympathized with the men who were brought to the show by their wives and girlfriends, and he even dedicated ‘Ole Red’ to them!

A highlight of the show was when Blake took a seat at the end of the catwalk with his guitar. He performed acoustic versions of crowd favorites, ‘Nobody But Me,’ and ‘She Wouldn’t Be Gone,’ as well as his first number one hit, ‘Austin,’ which is pretty much as good as it gets.

He ended the show with ‘Boys Round Here’ and was accompanied by Raelynn. She’s a protégé of Blake’s from The Voice, making it apparent how much he cares about the singers on the show. His encore couldn’t have been more perfect; the rollicking get-the-whole-joint-dancing ‘Footloose’ followed by the heartfelt ‘God Gave Me You’.

Blake is one of those rare artists that sound even better live than on his records. It’s no wonder he’s a five time CMA Male Vocalist of the Year. Couple that with his charm and charisma, and it’s easy to understand why so many people adore him! As someone who has seen Blake numerous times, I’d say the gossip is true: he is one very happy man these days! That happiness translates in his looks, his energetic performance, and those contagious smiles!