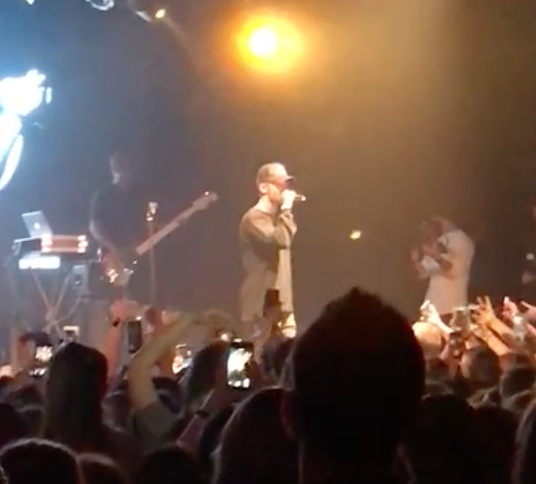 As soon as I heard Jake Miller was coming back to New York City I knew I had to be there. In August, Jake released his latest EP, Overnight. He announced earlier on that he wanted to put out music that meant a lot to him, which meant transforming his sound from rap to pop.

I saw Jake last year on his Dazed & Confused Tour and I can honestly say that he is one of the best performers. I was so excited because originally I was just going to go to the concert alone, but on the morning of the show I got an email from Warner Brothers Music telling me I won two tickets! I convinced my roommate and she asked her friend to come too! Just like that we had a crew rolling to this concert. I’d never been to the Highline Ballroom, but having gone now, it’s a very cool and weird space. There were random booths everywhere and if you sat at one you had to spend $10 minimum. I think the reluctant parents that were dragged there were enjoying this.

The concert started right on schedule with the first of two openers. Cade, a singer/DJ sibling two-piece based in LA got the crowd going with his high notes and danceable beats. It was obvious that this was one of their first shows and I’d really like to see them again after they have a few more shows under their belt. Their song ‘Care’ has over 2 million plays on Spotify.

After a quick thirty minutes, Bryan J, the second opener, kept the ladies in the room’s attention with his silky smooth voice and his soulful sound. He tried to do a super slow cover of ‘Hotline Bling,’ but to be honest; when that song comes on I just want a tempo I can bust my Drake moves to. For his last song, Bryan decided to take off his shirt off, which I personally could’ve lived without. Overall, he had a great voice and a lot of talent, but I was ready for Jake.

Right at 9:30, Jake Miller appeared. He opened with ‘Good Thing,’ and after that mixed his new records with the classics and crowd favorites. He didn’t talk to the crowd too much because he wanted to get as many songs as he could into the set. Jake is one of those artists who have a lot of fun on stage and wants to make sure you have the best time at his show.

If you’ve never been to a Jake Miller show you should expect typical hardcore “fangirls,” but also be ready to dance and have a great time! Whenever he comes to New York City I always make an effort to see him. He also announced that another tour is coming soon—so keep your eye out for that! Overall, the show was really great and the tickets were only $10, so you couldn’t beat it for a fun night out. One of my favorite things about New York City is the music scene, and I’m proud to say that the friends that I brought walked out of the venue as Jake Miller’s newest fans.

One thought on “Jake Miller: “The Friends That I Brought Walked Out Of The Venue As Jake Miller’s Newest Fans””