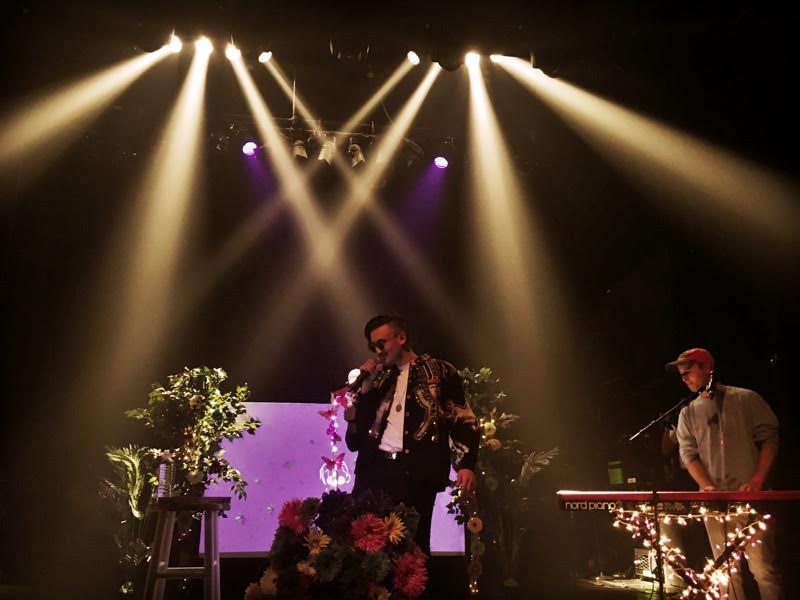 A while back, a friend of mine told me to listen to a song that he thought described me, and this song was called ‘Rumours’ by Gnash. The lyrics in the chorus are, “I don’t f–k with no rumours, Girl. I know you’re the truth.” I instantly fell in love so I listened to the rest of the EP. As time went on I found myself listening to more of Gnash’s music each day. In July I came across a tweet about his fall tour so I ordered the tickets as soon as the presale went up online. Then, for a handful of weeks I looked at the tickets hanging on the fridge as I counted down the days.

On Tuesday, October 11th, it was finally time for the show and I hopped on a train and made my way to the Gramercy Theatre. The openers were fun, but eventually the lights dropped and I was struck with the feeling I know all too well. It was finally time to release all of my stress and be at my happiest for the night ahead.

The stage was set up beautifully, and the Christmas lights and flowers that adorned the stage made me feel lit up inside. The second Gnash came out I felt myself come alive. I knew every word and I was soaking up all of the positive energy around me.

Gnash played ‘Rumours’ in the beginning of the concert and I felt nostalgic in the best way. A little while into the set he covered ‘First Day of My Life’ by Bright Eyes, as expected, and having gone through a Bright Eyes phase myself, I was so happy. Gnash faded into ‘I Will Follow You Into The Dark’ by Death Cab For Cutie, which is another one of my favorite songs. I was going so hard during that song that a few people even commented on it!

A little later on in the show he introduced us to some new songs that’ll be coming out soon, even bringing out MAX for one of them. During the encore, he came down into the pit for ‘U Only Call Me When It’s Raining Out,’ and the whole crowd was full of love. For his last song all of his friends came out and you could truly feel all of the love in the room. The support from his friends filled the entire venue with pure happiness.

After the show, Gnash had a meet-and-greet and I waited on line for about 25 minutes just to meet him. When I walked up to him he gave me a big hug, signed the set list, and took a picture with me. Meeting him was brief, but so lovely. Seeing Gnash perform live was just what I needed in my life and I’m so grateful for the experience.