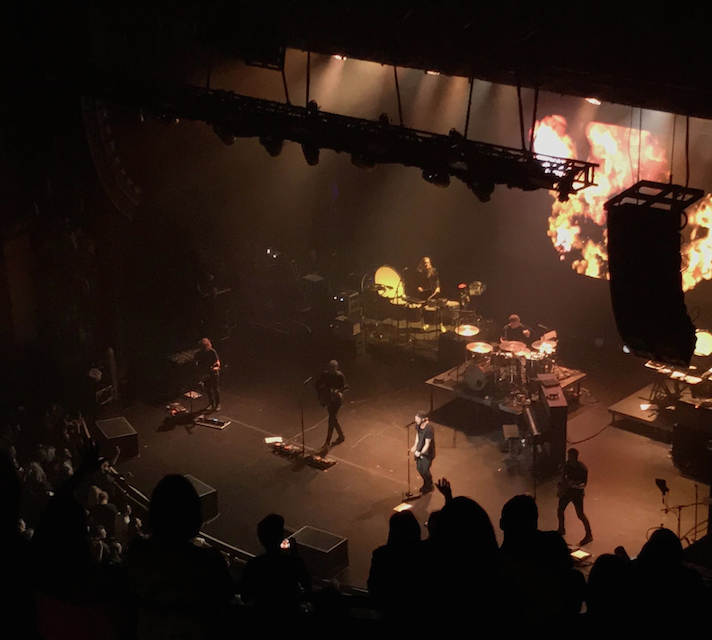 If you were to ask me who my favorite band is, the answer will always be OneRepublic, and it’s been that way for nine years! Usually when it comes to OneRepublic concerts I know about them beforehand, but the Fresh 102.7 Fall Fest snuck by me and I found out about it just three days before it was happening.

Of course, the concert was sold out and I had to watch StubHub like a hawk. Finally, on the day of the concert I bought a nosebleed seat for way too much money, but to be honest, I would pay just about any amount to see this band. The show was at the Beacon Theater on the Upper West Side and it started at 8pm. I ran directly from my math class and got to the venue at around 8:30pm, so I unfortunately missed the first of three openers, an 18-year-old British singer named James TW. However, the lady sitting next to me told me he was good so I had to take her word on it. Personally, I’ve never heard of him, but I have since looked him up on Spotify and he sounds a lot like Phillip Phillips!

When I arrived at the show Mike Posner just started his set. Mike is a very talented artist and I feel like a lot of people forget that because he tends to disappear from the music scene from time to time. Overall, his set was great! He did all of his songs with an acoustic guitar and was also accompanied by a pianist. At the end of his set he sat on the edge of the stage and then went into a poem that I assume he wrote. I thought it was a cool and very deep way to end is time with us.

After a 30 minute break Phillip Phillips took the stage with his cellist. He was very witty and funny when he talked to the audience and his set was very impressive. Finally though, after what felt like forever, OneRepublic came out at around 10pm. They opened with ‘Love Runs Out,’ which was an interesting choice to open with in my opinion.  They played all of the crowd favorites and sprinkled in their new records. I was hoping to hear more of the new album but Ryan said they were still working on how to perform them because the album only came out a few days before the show.

Ryan Tedder is hands-down my favorite person in the music industry, and the most talented. His lyrics and production are unlike any other. This was my third time seeing them in concert and it just never gets old. Ryan told us that a tour is coming very soon and that it’s going to be unlike any of their other tours. I’m so unbelievably excited because their album, Oh My My, is absolutely fantastic and I’m still listening to it on repeat! Every time they drop an album they push the boundaries musically and lyrically.

OneRepublic closed the show with one of their new records, ‘Future Looks Good,’ and they did not perform an encore. After the show got out I noticed that not too many people were waiting for them to come out so I decided to stand, wait, and see what would happen. I waited for about an hour, and the band members came out in a hurry. Then Ryan came out. His security was rushing him and it was obvious that he simply didn’t have time to stop for everyone. Usually he loves to talk and take selfies with fans so I knew it wasn’t his choice. I didn’t get my own photo with him, so instead I jumped into this other girls’ photo. Thankfully she wasn’t mad that I joined their selfie. To be honest, what was I supposed to do? Did I mention Ryan Tedder was grabbing my hand?! After this quick encounter with fans he was hurried into a van. Overall, I have to say that Fresh 102.7’s Fall Fest was a great experience and seeing OneRepublic again reminded me of just how amazing they are, and it made me so excited for their next tour!