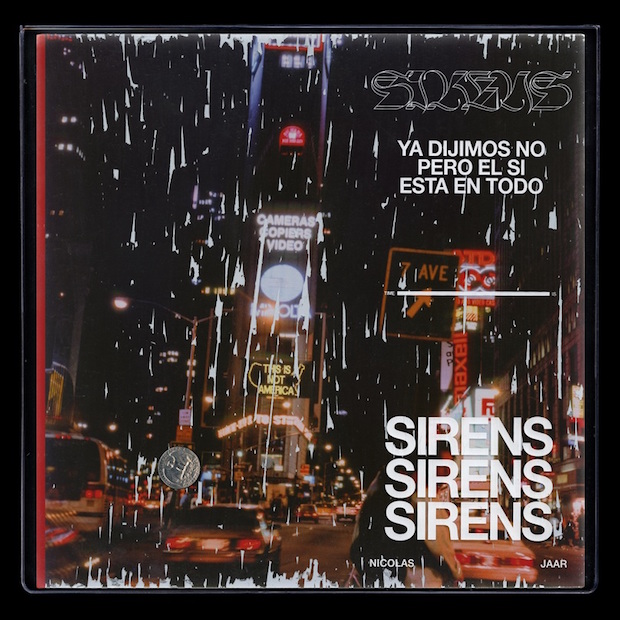 It goes without saying that 2016 has been a thoroughly despicable year in politics. Names that need not be printed here threaten the very existence of mankind with nuclear warfare, stirring up the ever-combustible pot of racism, homophobia, xenophobia, and sexism that’s historically been exploited for horrendous reasons time and time again. History tends to repeat itself, they say, but society’s reaction is a bit different this time: while great art is often born of completely depraved circumstances, we’re already hearing incredibly political music even before the crisis has been truly confirmed. This year has been rife with political music, spanning forms hilariously unsubtle, painstakingly autobiographical, assertively brazen, and beautifully placid. Even one of the year’s biggest pop smashes has more than just a dash of feminist outcry in its angrily personal tale.

Nicolas Jaar’s Sirens, his first proper LP since 2011 debut album Space Is Only Noise, is a political album, but it’s not like any other political music you’re likely to hear in 2016. Its lyrics initially come second to the feelings its music conveys, mostly since Jaar’s deep, sultry vocals arrive in a blur that’s a tad softer than the fog he’s already renowned for. Through the intense, head-spinning rushes of his dance, post-punk, and ambient brews eventually emerge concerns about authoritarian governments, Islamophobia, and immigration. It’s certainly a personal affair: Jaar’s parents escaped Chile’s absolutely barbarian Pinochet regime, relocating to his current New York City hometown and giving birth to him shortly before Pinochet’s rule came to an end in Chile. Sirens is the work of a frightened young man who sees the potential for his current country to decay into a hateful dictatorship frighteningly similar to the one his family fled; its alarms ring in the various forms of digitized percussive insanity, industrial clatter, ambient fade, and Jaar’s loftily crooned post-punk vocals, delivered both in Spanish and English.

The more instant layer of Sirens is its sound. The proof in the pudding is “No,” whose bilingual title belies its single-language nature. Perhaps’ Sirens most haunting song, the ska-sprinkled brood of “No” arrives via lyrics sung in Spanish. Even though many critics and listeners may be unable to comprehend its words, “No” contains the Spanish phrase emboldened on Sirens’ album artwork, a highly political photograph that Jaar’s father took; it doesn’t need to be in a familiar language for its political, revolutionist nature to be obvious. The song makes a compelling case for art’s profound impact transcending racial and cultural lines; it’s these very lines that seem to be the topic of “Three Sides of Nazareth,” which follows “No” for an invigorating one-two punch of crushingly lethargic fire. On “Three Sides,” Jaar sings about finding his bones, home, and friends all broken by the side of the road. When combined with the rest of the song’s words, it’s not unreasonable to assume that Jaar’s using his music to address not only the toxicity that failing to acknowledge and respect other cultures breeds, but also quite possibly the insanity of even suggesting a wall to define the US-Mexico border. Contempt, anxiety, and fear all manifest in the hefty percussive squash that forms the slices around the song’s quasi-ambient midsection, the meat of the sandwich.

The relaxed core of “Three Sides of Nazareth” might suggest that Jaar can find tranquility in even the most emotionally wracked of circumstances. It’s a notion further supported by Jaar’s choice to open Sirens with nearly five minutes of drizzly ambience before expressing his dismay at one of last year’s most frustratingly Islamophobic news stories. Over the course of opener “Killing Time,” it takes Jaar a moment to fully reveal himself to the listener, delivering his words about 14-year old Muslim student Ahmed Mohamad’s ridiculous mistreatment over a homemade clock in a quiet, echo-drenched wisp that sounds more delicate than it does assertive. His voice moves closer to the song’s center across the remainder of this 11-minute experiment, which manages to whisper a vital message – don’t ignore the vital lyric “comfort says we’re fine,” a cold reminder that suffering is everywhere even if we don’t see it – with the volume of a motorcycle speeding down a residential boulevard.

Similarly, “The Governor” launches with Jaar and some sort of recording calmly stating the word “deicide” – a pretty monotone way to talk about killing a god – before barreling into evenly spaced flashes of digital percussion. Between these sonic attacks land Jaar’s pensive lyrics, which may well deal with the overwhelming feeling that a broken society just can’t be fixed. Jaar’s sentiments quickly move towards the less abstract and more vividly disturbing and vexed (“the mothers have sunk/all the blood’s hidden in the governor’s trunk/they keep you in a hall with all of your ilk/to echo the title of the trunk that they built: ‘it’s alright’”) before the song enters just about four minutes of absurdly frenetic percussive barreling that feels like a nightmare collaboration between Suicide and Aphex Twin. Brass and woodwinds tossed over segments of this crazed instrumental break make for some of the most nauseous electronic sounds in recent memory, a soundtrack for dancing society’s pains away.

In the shallows where bodily movement never feels like an option, Sirens finds its scarce low points. The weightless drift of “Leaves” feels like a pit stop that no one necessarily asked for, although the extremely distant recordings of a very young Jaar talking with his father are hair-raisingly intimate. Closing track “History Lesson” likewise never quite grows into the fanged beast that Jaar’s other Sirens tracks show it could be capable of becoming. Then again, this is a six-track electronic album that spans 42 minutes, and with subject matter this lofty, it’s hard to fault Jaar for going a bit sparser to recover from the exhaustion that his gray scale quasi-bangers can cause. Political protest is tiring, disheartening work, and even someone as enraged as Jaar needs the occasional break. After all, Sirens reminds us of our civic duty so innovatively that it might just inspire the very revolution he wants.

One thought on “Sirens by Nicolas Jaar”