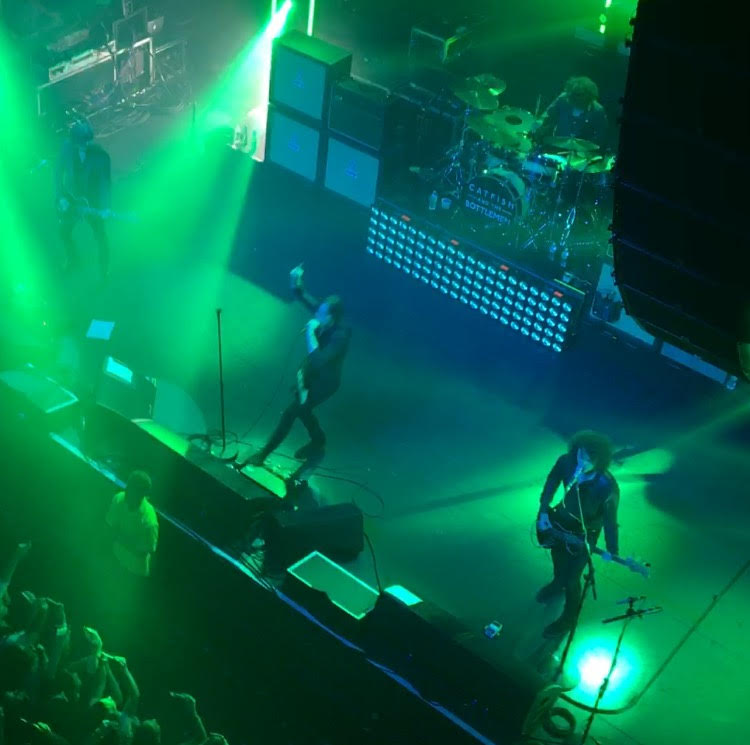 Rushing from our classes that ended at 5:30, my friends and I (and 11 other of our friends that we convinced to come) raced to get ready and get to the venue. When we arrived at Terminal 5 we made our way up to the second balcony where we had a great view and plenty of space to dance. Not long after we got there, the opening act came onstage, an energetic band known as The Worn Flints. The lead singer bounced around the stage throughout their set list and fed off the energy of the crowd. They were a great band to pump up the crowd before Catfish came out!

Finally, the lights went dim and the crowd was greeted by a strum of guitar in the darkness. The familiar notes of Catfish’s usual opener, ‘Homesick’ filled the air. However, it was the second song that really got me dancing. The band performed ‘Emily’ live for the first time, which my friends and I love specifically for the lyric, “New York, surprise me.” Since we live in New York, it was a wonderful surprise and we couldn’t help screaming along to the lyrics, excited that our city has made such an impact on a band that’s made such an impact on us.

After almost every song the lead singer, Van McCann, took the time to thank the crowd for coming to their show, filling up the venue, and buying their albums. It was great to hear how thankful the band was, and knowing I have in some small way helped them achieve this joy made me smile. It felt so personal and everyone in the room felt deeply connected. Even my friend, a first-timer seeing Catfish, commented on how polite Van was!

The crowd’s energy was unbelievable as they chanted every word to the band’s more mellow song, ‘Hourglass,’ and danced through the more upbeat songs. The energy from the crowd reflected the energy onstage as the lead singer/guitarist Van McCann, guitarist Johnny Bond, bassist Benji Blakeway, and drummer Bob Hall all rocked out with unbelievable solos and an overall incredible performance.

Catfish and the Bottlemen never fail to impress me. Their high energy and passion are so obvious onstage. I don’t know when I’ll be seeing Catfish and The Bottlemen next, but I do know that it will take a while before I’ll be able to calm down and not have concert flashbacks every time I close my eyes!