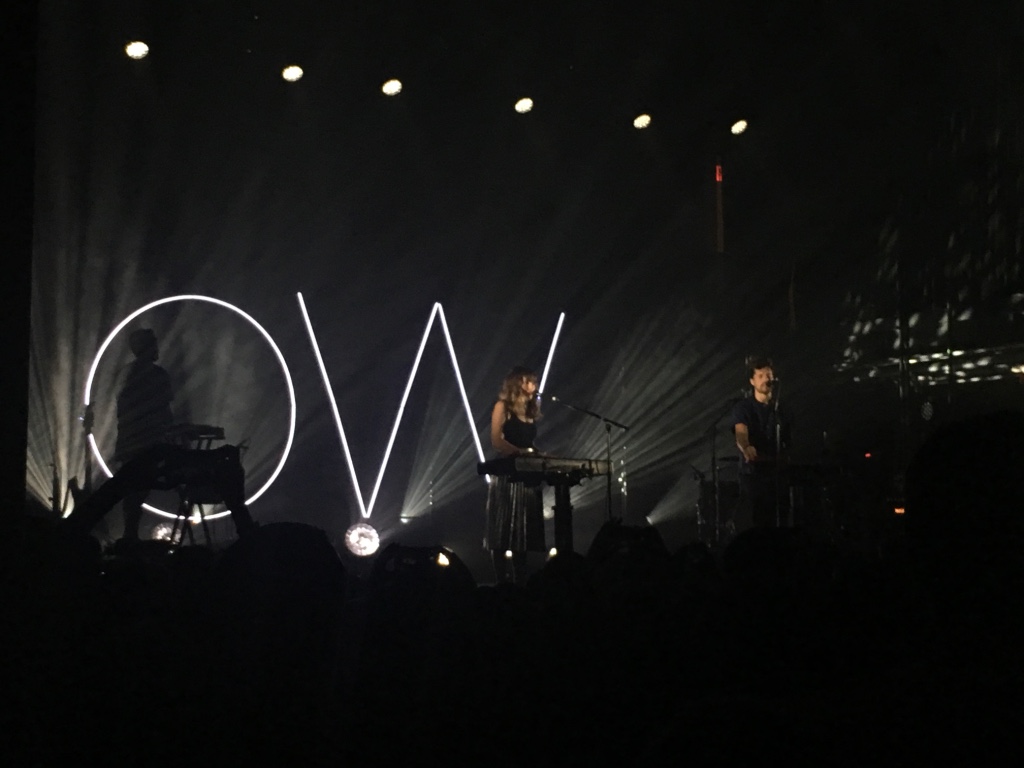 Last Wednesday at Terminal 5, Oh Wonder put on an absolutely incredible show that had the entire crowd dancing and belting out lyrics for their hour-long set. To level with you a bit, I’m kind of a concert freak. I’ve seen just about 50 artists this year with a few more on the way. I did cheat a bit by hitting up 2 festivals, but hey, that still counts! My music taste spans from The Eagles, to St. Lucia, to Chris Stapleton, to the Backstreet Boys (and no, I’m not afraid to admit it) so I really listen to it all.

If you’ve never seen a concert at the industrial yet oddly laid back Terminal 5 in NYC, you are truly missing out. I’ve now been there twice in the past month and a half and it’s quickly becoming one of my favorite venues in the city. The abandoned warehouse vibe and the incredible acts they book for such a small space (3 levels holding about 3,000 people) has me sold. This British duo of Anthony West and Josephine Vander Gucht sing and play their hearts out every time I’ve seen them. They are so charming and original it’s hard not to fall in love with them, and when you hear their harmonies and the emotion poured into their music you will become a fan forever.

They stopped between songs to tell the crowd they had spent the last month living in an Airbnb in Williamsburg, Brooklyn writing their next album. After seeing them twice, I still find it shocking that they have only been writing and performing together for less than 2 years. They have such a distinct sound, personality, and honesty in their music that is refreshing in the sea of generic pop that’s on the radio. That’s not to say that I don’t dance my ass off and belt it out to top of the charts hits (believe me, I do), but their music just hits you right in the feels while making you want to dance.

If you’re new to Oh Wonder, try out their top song on Spotify, ‘Drive.’ Its lyrics touch upon that relationship that’s more work than it’s worth. You know the one. The relationship that you need to let go for your own good. I think just about everyone can relate to that and with all of the songs on their debut album as they take you through every emotional experience in a relationship, and through all the highs and the lows. The duo also have the unique perspective of telling the story from both sides of a relationship when writing and performing, so you really get the sense of the back and forth and the mess of feelings that go through someone’s mind in each and every song.

My favorite song of theirs is ‘Body Gold.’ I came to find out after falling in love with it that it was the first song they wrote and released. They also said it was the roughest cut of the album because they really didn’t know what they were doing at that point, which is why it has a little bit of a different air to it. It’s electronic R&B with a sweet melodic ring. Over the past year they became so much better at the production of their music, and if you compare and contrast ‘Body Gold’ and ‘Drive’ you can really hear it. Though in my opinion, the grittiness of ‘Body Gold’ is what I really love.

In the middle of the show, the rest of the musicians exited the stage leaving just Anthony and Josephine to tell the story of their new album (with no mention of a release date) and to play a brand new song they’ve been working on. Unfortunately, the crowd was so excited that I didn’t catch the name of it, but it made me very excited for what was to come (scratch that— I used my Google skills and it’s called My Friends). It was much darker than anything off their debut album and used just few chords on the keyboard for melody. The song speaks to the pain of having to leave your loved ones behind to pursue your dreams and carrying that pain with you. It is hauntingly beautiful.

They ended the show with the crowd pleasing ‘Technicolour Beat,’ which truly brought the place alive. When we hit the breakdown in the middle of the song and the confetti cannons exploded, people went crazy. After seeing Oh Wonder twice now, I can say that I could see them time and time again and it will never get old because of their distinctive style, humble and quirky personalities, and the relaxed yet exciting nature of their performances. I cannot wait for album number 2!