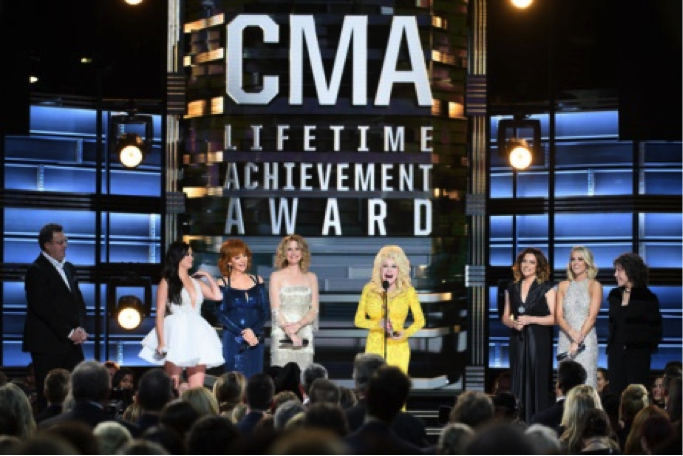 The CMA Awards are always the biggest night of the year for country music, but this year was worth a little more boot stomping than usual. The award show celebrated its golden anniversary on Wednesday resulting in, you guessed it, its biggest production to date.

Here are the top five moments of the night:

In the weeks leading up to the show, CMA producers and hosts Brad Paisley and Carrie Underwood promised us that the first eight minutes were going to be monumental. Monumental might have been an understatement. What they delivered was a massive medley of country classics performed by Vince Gill, Ben Haggard, Roy Clark, Brad Paisley, Carrie Underwood, Charlie Daniels, Dwight Yoakam, Charley Pride, Reba McEntire, Alabama, Ricky Skaggs, Alan Jackson, Clint Black and Randy Travis.

‘Humble and Kind’ might just be the epitome of what country music is all about, which explains why it won Song of the Year! Tim made this performance even more touching by bringing out a group of students holding candles in honor of Ben Ellis, a teacher from Christ Presbyterian. These students were among the 400 that visited Ben’s home to pray and sing with him before he died of cancer in September.

3. Beyoncé’s collaboration with The Dixie Chicks

Despite many country fans reacting negatively on social media to the rumors of Beyoncé performing at a country music award show, her performance with the Dixie Chicks of her song Daddy Lessons was actually THE jaw dropping moment of the night. The Dixie Chicks covered this song all summer on their tour and certainly did not disappoint. The energy between the four performers had the entire audience up on their feet and earned them a standing ovation.

The other show-stopping performance of the night was the remarkable tribute Jennifer Nettles, Reba McEntire, Kacey Musgraves, Carrie Underwood and Martina McBride paid to Dolly Parton with a medley of her top hits. They then honored her with the Willie Nelson Lifetime Achievement Award. Perhaps the craziest moment in all of this was when producers cut her acceptance speech short and told her to wrap it up. They might have been the only ones to have ever told Dolly what to do.

What’s surprising about this is not that Carrie won, but that it ended Miranda Lambert’s six-year winning streak, sending Miranda home without any awards. Having won Female Vocalist of the Year four times throughout her career, Carrie is no stranger to the award but still cried her way through her acceptance speech. With the success of her sixth studio album Storyteller and year-long tour, no one in the audience was shocked that Carrie snagged the award.