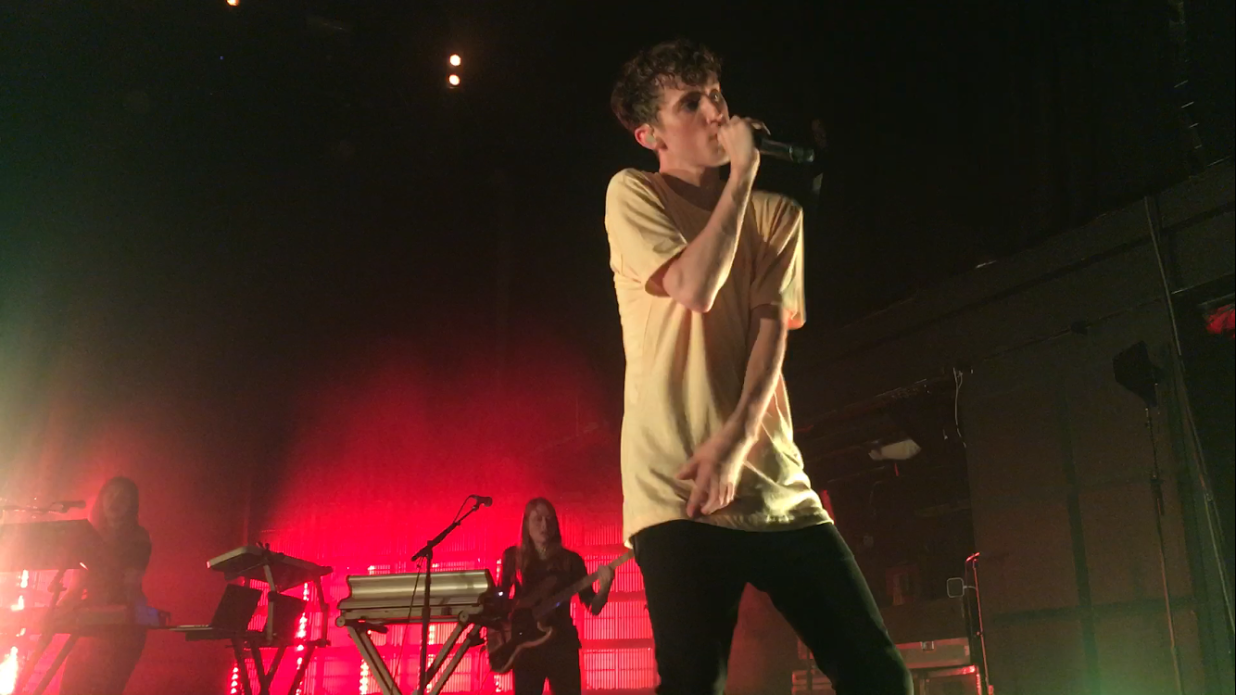 After weeks of excitement leading up to seeing Troye Sivan again, it was finally the day. I arrived at Terminal 5 in New York City at around 1:30 PM and made my way to the VIP line. After a while of sitting in silence I made conversation with other fans around me. The Troye fandom is so welcoming and nice, and at every show I’ve ever been to I’ve managed to make friends while standing in line. Everyone wore glitter and rainbows, and we probably waited for 4-6 hours before they started letting the VIP line inside the venue.

When the doors opened we all walked as fast as we could and received our VIP bags, which included a signed poster, a Chipotle gift card, and a light up bracelet. We ran to the barricade and my friend and I got a front and center view of the stage! One of the opening acts, Jess Kent, was first onstage and although she isn’t very well known, her music was really cool and different. As we were waiting for the second opener we saw some of Troye’s family and friends in the upstairs VIP area and waved to them. At this point we made even more friends because of all of our fangirling!

Dua Lipa, Troye’s second opener, came onstage and I went absolutely crazy! She looked amazing and she got the crowd dancing, screaming, and ready for Troye’s performance. Her stage presence is incredible and she made eye contact with a bunch of us in the front. After her performance, it was finally time for Troye to perform and everyone was anxiously waiting for him to enter the stage. We started to hear the first bits of ‘WILD’ as his band members began to play.

Troye jogged onstage and the crowd went wild. The whole audience screamed and danced along with him. He would talk in between songs and really connected with his fans more than any other concert I’ve been to. He talked like we were a huge group of his closest friends and makes it such a personal experience for the entire audience. In the beginning of some songs there were cool little intros of him talking with voice-overs that made everyone, including myself, so excited for the upcoming songs. He would also change up the notes every now and then from the original recorded version, and the crowd roared in excitement.

In my opinion, ‘BITE’ is always the song that gets the crowd the most hyped for the rest of the show because of its instrumentals. It started with the voice-over followed by loud screams as Troye began to sing. However, soon after, all that could be heard was the crowd screaming the lyrics right back to Troye. The biggest smile washed over his face. Before the chorus he’d scream “let’s go New York City!” and everyone jumped and flailed their arms and bodies around, jamming out with Troye! It was such a surreal experience!

Troye sang many variations of his old songs including ‘FOOLS’ and the original ‘Happy Little Pill’ from TRXYE. He sang songs he’s never sang live before like ‘THE QUIET’ and ‘BLUE’ with his guitarist, and ‘WILD (feat. Alessia Cara),’ but with his keyboard player instead. During ‘HEAVEN’ he explained his experience of finding himself and coming out. He told the crowd that we are valid and that we need to be united and be ourselves, and that no one can tells us who to be.

Pride flags were everywhere and for each song our light up bracelets would change color depending on what song was playing. It was truly an amazing environment, and it was really wonderful to see how the lighting and the background visuals enhanced the show. During one particular song break he poured his water bottle on us! Later on he left the stage “for a quick costume change” and we all checked Twitter to see that Troye changed his Twitter name to “Dua Lipa Updates.” We all laughed together, especially when he came back out in a “Dua Lipa for president” tee shirt! He continued talking about how much he loves her and then he began to sing ‘Somebody To Love Me’ by Mark Ronson.

To our surprise, Dua Lipa came back out and they turned the song into an amazing duet! They danced with each other, and after finishing up with a total of 15 songs he said his goodbyes and left, but only to come back out again for a two-song finale. We were all so sad to leave the concert, but as the crowd slowly made their way out of the venue some lucky fans got waves back from Troye’s family and friends. Troye’s parents made a heart together with their hands and I even found a copy of the set list on the ground!

This was the fourth time I’ve seen Troye perform live and he’s become so much more comfortable onstage. His personality is so welcoming and attention grabbing, and being able to witness the crowd growth at each show is unbelievable! The Suburbia Tour was the best show of his that I’ve seen, and I hope I can see him again really soon. I 100% recommend buying yourself a ticket because it’s truly a concert where everyone is welcome and encouraged to be themselves!