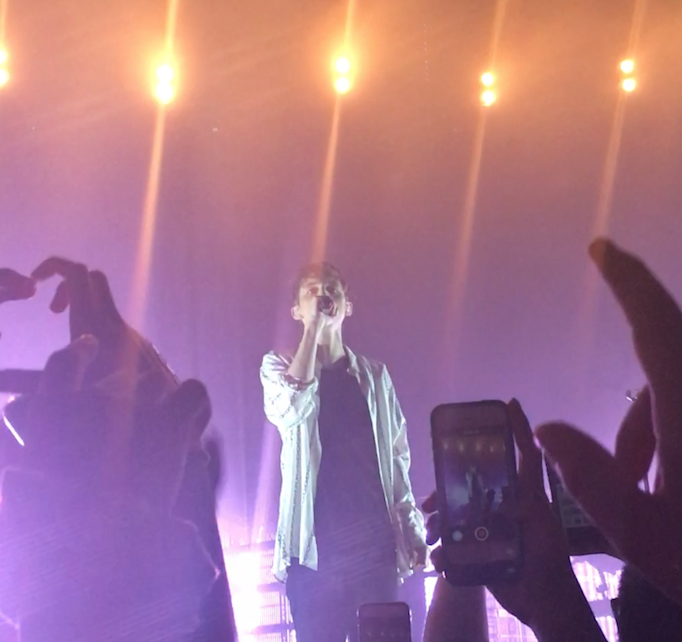 I still can’t believe that I was finally able to see Troye Sivan live this past Tuesday, November 15th, at Terminal 5 here in New York City. I’ve been dying to see Troye perform live for a long time now. I was supposed to see him in concert last year, but since my friend was going to be out of the country we couldn’t make it work. I wasn’t willing to go see him without her since I was the one who introduced her to Troye’s music. I told her, “Don’t worry! The next time he comes to New York, we’re going!” And finally, it happened.

On Tuesday I woke up at 3:15am and got ready to wait in line for the show. I arrived at Terminal 5 at 6am. There were eight people in front of me, which wasn’t too bad. I literally waited for over 12 hours outside of the venue to see this beautiful boy perform. The waiting wasn’t the worst part though because unfortunately it was cold and rainy as well. It was pouring just about all day until we were getting ready to go into the venue!

We finally got into Terminal 5 at around 6:30pm and the show started at 7pm. Troye had two opening acts, Jess Kent and Dua Lipa. They both were so awesome, and I’m so happy they opened up for Troye. They set the perfect tone for what I knew would be an amazing performance by Troye himself.

At around 9pm, Troye finally came out. I’ve never been so excited and I was literally screaming my lungs out. The concert was LIT. I was singing and screaming throughout the entire show, and it felt like I was at a party. It wasn’t just me, either! Everybody was having the time of their lives!

It wasn’t until after the concert that I realized how much in pain my body was in. I was literally limping home. I guess I went too hard! But, in the end all of that standing for 16.5 hours was totally worth it. Troye made everything worth it. He is such an amazing talent and if you ever have the opportunity to see him perform just do it! You will thank me later! I promise.