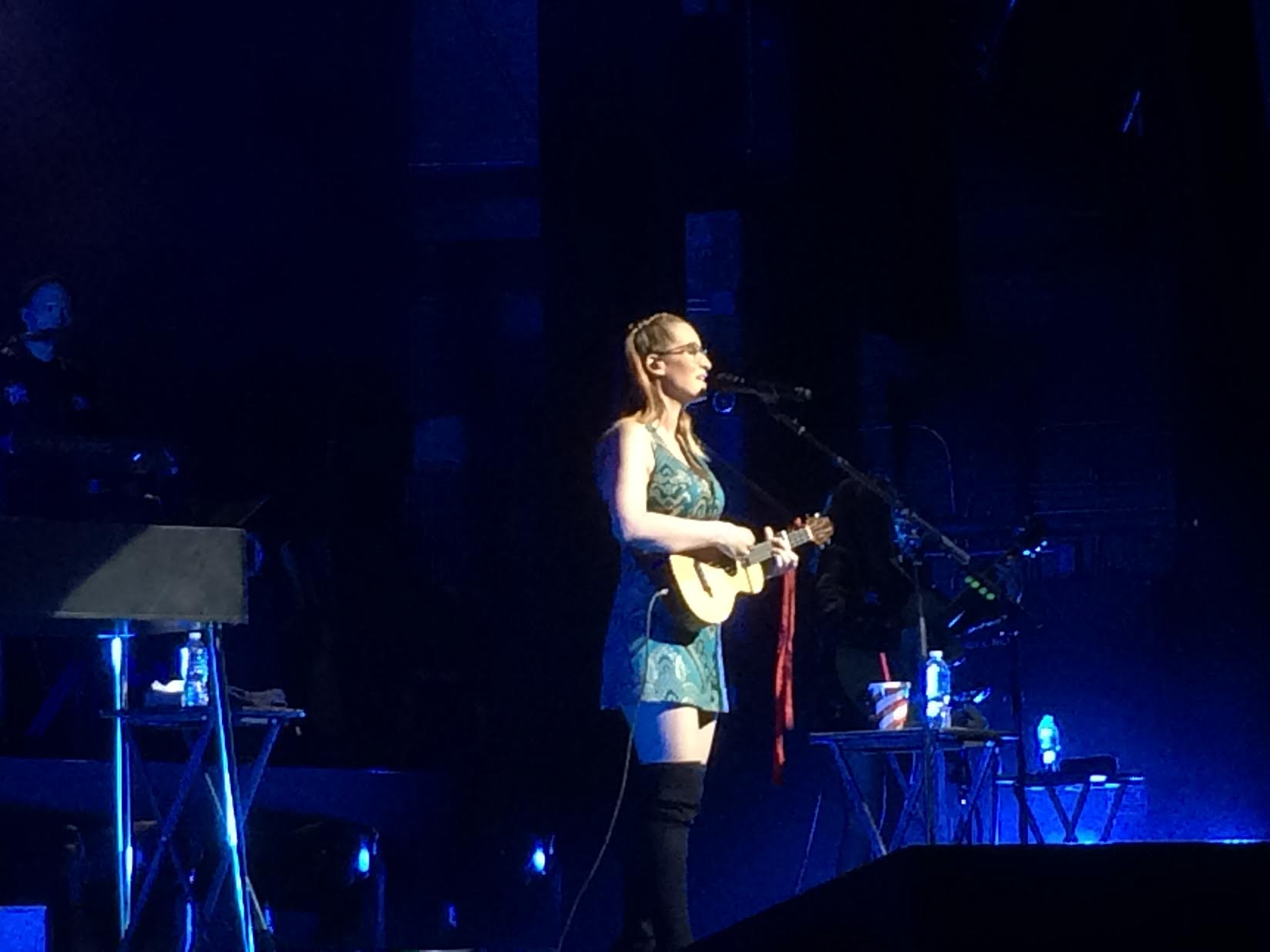 If you’ve grown up watching Grey’s Anatomy, then you might have heard a few songs like ‘Keep Breathing’ and ‘The Way I Am’ by Staten Island native, Ingrid Michaelson. Ingrid has grown in popularity since her television and commercial features, but has fostered a thriving and successful music career that has her headlining at NYC’s historic Beacon Theatre November 16-17. After the release of her latest album, It Doesn’t Have to Make Sense, Ingrid has set out on her Hell No Tour and I’ve had the fortune of seeing her both nights because when Ingrid Michaelson plays two NYC shows, you buy tickets to both.

I’ve loved Ingrid Michaelson since her ‘Girls and Boys’ days and can recite every line to her songs. It’s gotten to the point where I’ve lost count of the number of live shows attended from her first performance at Tarrytown Music Hall, to her Holiday Hops, and now her Beacon Theatre debut. Like any other fan, I can say that it’s great to see Ingrid’s success and ability to sell out the Beacon! A perk of being on Ingrid’s newsletter, is that I was able to purchase tickets early, so the minute they were released, I didn’t hesitate and the countdown began! Unsurprisingly, the November 16th show sold out and she added another night so NYC fans could get a chance to see her and also give people (obsessive fans) like me another opportunity to experience her transcendent music, overtly humorous personality, and many anecdotes that pushed her set past curfew!

I arrived at the Beacon Wednesday night with some of my Ingrid Michaelson apparel, sporting my Human Again sweatshirt and Lights Out shirt. I entered the theatre and was filled with happiness, excitement, and eagerness to be in Ingrid’s presence for the ninth(?) time. Her stage backdrop included three panels with her name and lyrics to her song ‘Light Me Up’ that then changed for her second act to a panel reading ‘IM’. Eight o’clock finally rolled around and her opener, AJR, promptly came out and started their set with ‘Come Hang Out’. To be honest, I hadn’t heard of them beforehand. It was only when Ingrid released a few songs in collaboration with AJR that I got into their music and I definitely recommend listening to their latest EP. They sent so much energy to get the crowd pumped up for Ingrid’s opening. I’m pretty sure they burn more calories jumping around that stage than I do at the gym.

After a quick set change, Ingrid’s band came out on stage and the feeling I got anticipating her presence was just as giddy as the first time I saw her live. She never ceases to make me want to hyperventilate seconds up to her entrance. She came out in a black and white lace dress with high black boots and her iconic glasses. Ingrid and her band opened with the first track on her new album, Light Me Up, and the Beacon was lit up with effects that Ingrid said were “the most elaborate of any other tour.” I love her concerts because she is so personal and weaves in her older songs with the latest. For example, she mashed ‘Corner of Your Heart’ with ‘How We Love’ – revolutionary to my eyes and ears. She also sang her cover of ‘Creep’ alone on stage with a single spotlight and one could hear a pin drop in the theatre until she riffed and everyone lost their minds.

What made Ingrid go past her set curfew for the theatre the first night were her many transition stories between songs, including how much she loves the movie ‘Home Alone’ and needing to cope with the fact she’s now as old as the mom was. The audience laughed and Ingrid then made a comparison between how Americans clap to Germans who don’t seem to stop until the next song begins. Ingrid said it’s “pleasing to her ego,” but that it’s then like jump rope when to start the next song! Point being, she wanted us to German clap her band back on stage after her solo stage presence singing ‘Creep’ and ‘The Way I Am,’ and we most certainly did. They continued singing songs from her new album, It Doesn’t Have to Make Sense, and welcomed AJR back on stage to sing ‘The Lotto,’ which they’d written together.

The second night of her show on Thursday was similar in that she played most of the same songs, but this time she wore a tight blue dress that she kept complaining wasn’t sticking to the wardrobe tape and how her girls need a little more help. Just one example of how Ingrid doesn’t care what others think and that she’s just there to enjoy herself and make others laugh. She also didn’t do her ‘Corner of Your Heart/How We Love’ mash up. Instead of ‘How We Love,’ she sang ‘Home’ – one of my favorites and particularly fitting since she a New York City native. The energy was just as palpable if not more, as I was fourth row, standing and singing along the entire time. You don’t sit at an Ingrid Michaelson concert people! Ingrid even glanced and smiled at me several times!
During both shows, Ingrid prefaced the last song in the set, ‘Hell No,’ by saying “guys this is our last song, but then we’re going to pretend walk off stage and come back two seconds later and sing more.” This was not my first Ingrid concert rodeo so I knew perfectly simple choreography was about to happen. Sure enough, Ingrid and her band did a cover to ‘I’m Too Sexy’ for their encore, featuring the voices of all the band members and pretty snazzy moves, even donning costume accessories for that picture perfect moment. They also sang ‘Girls Chase Boys’ for which everyone got out of their seats and sang and danced.

My favorite moments from both nights would have to be when she sang her well-known song, ‘Maybe’ and her not-as popular single, ‘Turn to Stone’. Ingrid usually sings ‘Maybe’ while accompanying herself on her ukulele, but this time she did it freestanding, so it was cool to see a different style performance of the song. I absolutely love ‘Turn to Stone’ for its repeating and soothing piano riff and the large buildup one would not expect when hearing the beginning of the song. It’s a time when one can really feel the band’s energy as they play guitars, piano, and drums for the song’s moving instrumental.

I walked out of the Beacon trying to process what I’d just witnessed. Every one of her concerts impresses me more and more and what I love about Ingrid is that while her music has developed, her amicable personality really hasn’t changed since the first time I saw her a few years ago. She’s so down to earth and is genuinely thankful to her fans and for all her success. She makes a connection with her audience, one that can’t be explained without actually experiencing it live. After adding two more shows to my Ingrid concert book, I purchased my 10th Annual Holiday Hop tickets for December! The next countdown begins!

One thought on “Ingrid Michaelson: The Hell No Tour”