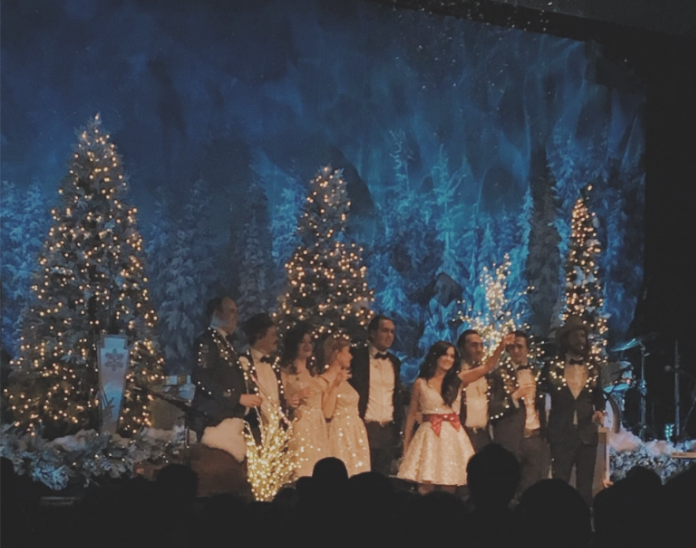 I first became familiar with Kacey Musgraves when she won two of the four Grammys she was nominated for in 2014. Since then, I’ve been following her and her music very closely. I not only love her music and lyrics, but her style and personality as well. I had the chance to see her live this past Thursday, December 8th when she brought her ‘A Very Kacey Christmas Tour’ to the Town Hall here in New York City. I bought the tickets during presale and was also lucky enough to snag a meet and greet ticket!

When doors opened I picked up my meet and greet instructions (the meet and greet was after the show) and headed into the beautiful, intimate theater and waited for the show to begin. The stage design was amazing and looked like a real life winter wonderland, scattered with Christmas trees and fake snow. The show started with Kacey’s band walking onstage in light-up tuxes while playing ‘It’s the Most Wonderful Time of The Year.’ Kacey’s arrival shortly followed and was welcomed with the most amazing applause.

Going into the show I was unsure of how much of her own music she would incorporate into her Christmas tour, but I was pleasantly surprised with how cohesive of a show it was. Kacey sang some holiday classics such as ‘Have Yourself a Merry Little Christmas’ and ‘Feliz Navidad’ to help everyone get into the holiday spirit. She also included a few of her original songs on her Christmas album. ‘A Willie Nice Christmas,’ which was co-written with Shane McAnally and Josh Osborne and was a true crowd pleaser. Kacey also sang two of her most acclaimed songs ‘Merry Go ‘Round’ and ‘Follow Your Arrow’ which brought the audience to their feet.

On stage Kacey was a true star. Her personality shone through by her sassy little remarks and dance moves. Her true country girl was exposed when she kicked off her heels and opted to perform the rest of the show barefoot. Around half way through the show, she had confetti emulating snowfall from the ceiling, making everyone feel festive. A huge part of this concert was the band. They were some of the most talented individuals I’ve ever seen and Kacey is very lucky to have such a wonderful crew supporting her.

After the show was over and everyone was leaving, I was just beginning to get excited because it was finally time for me to meet Kacey! I was escorted to the balcony level of the theater and got in line with the other VIPs, who were all just as giddy as I was. When it was my turn I couldn’t help but have the biggest smile on my face. I handed her a gift I painted for her and she opened it in front of me, taking time to say thank you for the painting. It meant so much to me that someone who inspires me also appreciates my art and was willing to take so much time to talk to me! When it was time to take my picture, Kacey fixed a piece of my hair and we both smiled. I hugged her goodbye and left the theater.

If you ever have the opportunity to see Kacey Musgraves in concert, do yourself a favor and go! She is an amazing human with an incredible talent. If you are into country/ western music with a modern twist she’s the artist for you! Also make sure you check out her incredible Christmas record A Very Kacey Christmas to help get you into the holiday spirit.

One thought on “Kacey Musgraves: “The show was like a real life winter wonderland””