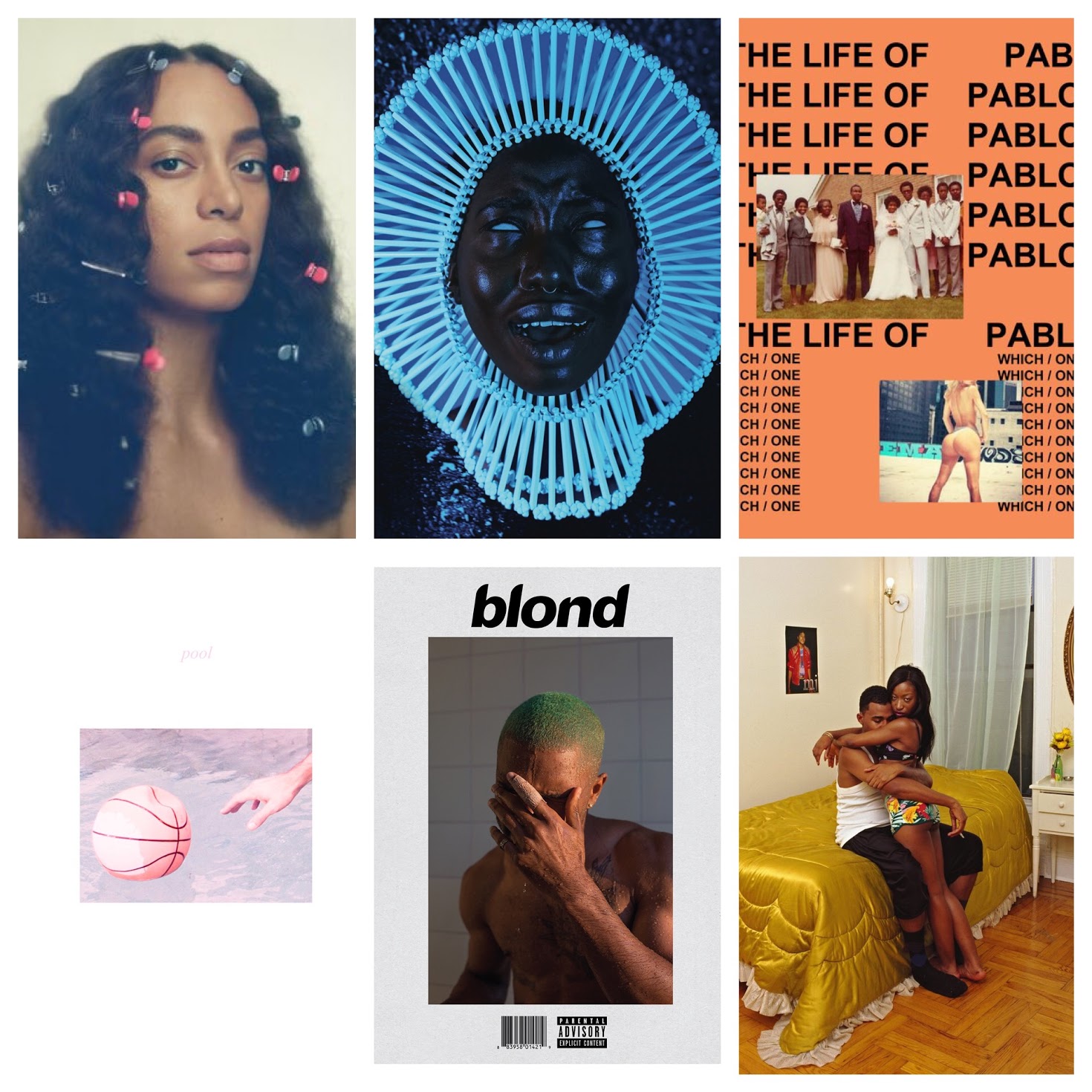 “Why your eyes well up?/Did you call me from a seance?/You are from my past life/Hope you’re doing well bruh.”

If you asked me to dream up a Frank Ocean album in my mind, Blonde is what I would have imagined. “Nights” is delivered in two parts and demonstrates all of Frank’s talents, crammed into a little over five minutes. The first half is Frank rapping, which is a skill he tends to save for very specific moments throughout the album. The second half begins the slower, R&B (and slightly more melancholy) descent into the rest of the album. “Nights” has also been compared to “Pyramids” on Channel ORANGE: consisting of multiple parts and clear centerpiece of the album.

2. “Me and Your Mama” – Childish Gambino

“Can’t stand it, backhanded/They wanna see us fallin’ apart/You know that I love you/So let me into your heart.”

As far as surprises go this year, this song was the one to catch me off-guard. “Me and Your Mama” is the first single and opening track on Childish Gambino’s newest album, “Awaken, My Love!” Personally, up until the release of his new show Atlanta on FX, I never understood all the hype surrounding Donald Glover. However, I was enamored by “Me and Your Mama” after just one listen. Cleverly disguised as a lullaby, the song begins with a soft, enchanting melody. The production on this track is stunning, guiding you steadily through until you are met with a bursting electric guitar and Glover’s striking vocals. The vigorous passion in Glover’s voice is so moving that I often find myself restarting the song the minute it ends, just to hear that first time he cries out “Let me into your heart!” Songs like this don’t come around every day and when they do, they deserve much praise.

“I ran into this girl, I said “I’m tired of explaining/Man this shit is draining”/I’m not really allowed to be mad.”

A Seat at the Table, Solange’s newest album is weaved with feelings of empowerment and self-care throughout, which makes her more than just an artist – but an educator as well. The beauty of “Mad” lies in the message: a reminder that people will constantly try to make your anger seem unjustified or irrational. Solange’s feelings about the way America has historically stereotyped black women as being too sassy or assertive translate through her cunning use of dialogue in “Mad.” “I got a lot to be mad about,” Solange responds calmly but firmly, to the girl asking her why she’s constantly complaining and unable to accept things as they are. Lil Wayne features on this track and although I haven’t cared for a Wayne verse since the “Bedrock” era, he provides substantial balance in this song.

Other notable tracks: “GLOWED UP” by Anderson .Paak & KAYTRANADA, “Consideration” by Rihanna & SZA & “Yesterday” by Noname.

“Everybody gonna say something/I’d be worried if they said nothing.”

2016 was a rollercoaster for Kanye fans but I will always be a firm believer in the creative genius behind the PR nightmare. The drama surrounding the release of The Life of Pablo initially discouraged me from listening, but when I did come around to it, I remembered why Kanye West has and always will be one of my favorite artists of all time. Kanye understands change is inevitable, he’s willing to embrace it and mold it into music we can relate to. The Life of Pablo features highs and lows that we all felt this year which is why this album provided us the ultimate soundtrack for 2016. The pettiness of “Famous,” the richness of  “Ultralight Beam,” and even Kanye rapping about his own struggles with relationships and mental illness in “FML.”

“I kept desiring context/The air was heavy and cool/Everything’s so delicate/As I watched you walk into the room.”

Let’s face it, I spent a lot of 2016 in my feelings. Therefore, I cannot deny that this was one of my top played albums of the year. Pool does actually sound like it was recorded underwater, or maybe a bedroom filled with smoke (a room with smoke also happen to be the perfect listening conditions). The songs are sad, but not so tragically sad that you can’t move a little. I spent many nights this year dancing to Aaron Maine’s live sets (as he made very strange remarks in between songs) and then proceeded to linger in the back of the venue with his friends. “Be Apart” is the standout track on this album if you’re looking for something you can (kind of) dance to, while those with slightly more depressing taste should opt for songs like “Hour” or “Glow.”

“Why choose love when hate comes first? And I know they’re better than me/Wait your turn and change your ways/But I know he’s better than me.”

Devonte Hynes a.k.a. Blood Orange, is the mastermind behind all your favorite pop songs – you just don’t know it (please refer to “Losing You” by Solange and “Everything is Embarrassing” by Sky Ferreira). Pair Dev with a female vocalist and he will make her shine. In On this album, you can find Nelly Furtado, Carly Rae Jepsen, Zuri Marley and Empress Of. While it is Dev’s most political album yet, it is no less accessible. America’s current racial and political climate is powerfully reflected in this album, especially on tracks like “Hands Up” and “Chance.” Dev knows better than anyone, how to create a marriage between the 80’s, jazz and modern pop – although, I’m not sure how many artists have attempted to do that in the first place. In songs like “Best to You,” which feature smooth-as-milk lyrics from Empress Of, Dev reminds us that if he wanted to, he could all Top 40 on us at any given moment.

Other notable albums: Malibu by Anderson .Paak, 99.9% by KAYTRANADA & Monda by Cousin Stizz