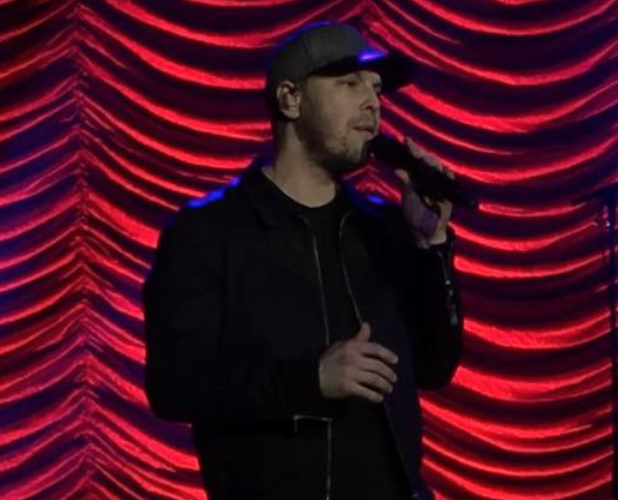 I’d only heard good things about the Paramount in Huntington, New York… that there is a certain “magic” at that venue. I was finally able to experience that magic for myself on December 13, 2016 when I attended Gavin DeGraw’s concert.

So much anticipation built up inside me for this concert from the moment Gavin announced the tour dates. I’ve never seen so many loyal fans come together. There were so many tweets and so many posts written by fans from all over that were making plans to meet, some for the first time and some to be reunited. This was certainly the case when we arrived at the venue because I was able to meet all of the “Gavin Girls” (and guys) I had been chatting with on social media. This made waiting in line much more pleasant.

The excitement elevated as we made our way into the venue and found our spots. Fans went crazy when Gavin finally stepped onstage with his band mates, Billy Norris, James Cruz, Mike Baker and David Maemone. Gavin opened up the show with his hit single ‘Chariot’ and had everyone singing and dancing in no time! He continued with other hits such as ‘Best I Ever Had’, ‘Sweeter,’ and ‘Follow Through.’  Gavin serenaded us all when he performed one of my favorite songs ‘Spell It Out,’ which was a real treat!

Things got a little up close and personal when the whole band sat at the edge of the stage to perform a stripped down acoustic set of ‘I’m In Love With A Girl’ and ‘Soldier.’  The crowd couldn’t help but sing along in what seemed to be perfect unison. Even Gavin felt it and we all saw the genuine emotion on his face when he said, “You guys sound good! Sounds like we got some performers up in here tonight!”

He continued the show with one of his new songs, ‘Something Worth Saving.’ In my opinion, Gavin has really outdone himself with this song! It’s definitely one of my favorites from his new album. Of course, a Gavin DeGraw concert wouldn’t be the same if he didn’t perform his classic ‘Not Over You’ and ‘I Don’t Want To Be.’  The energy level at this point was so intense as we were brought along on a trip down memory lane!

At this point I didn’t know if the night could get any better… until it did! Gavin wanted to “bring it back” to his first album since he felt the Paramount was the perfect venue to perform this one particular song. I already knew which song I really wanted to hear, and when he began to sing “Belief” my eyes welled up with tears. All I ever wanted was to hear Gavin sing that song live. Emotions were rampant and there was not one dry eye in the crowd.  I definitely felt the magic in the Paramount that night. He topped off the show with his new hit single, ‘She Sets The City On Fire.’  One last dance and it was over.

Gavin’s performance was amazing! He brought his heart and soul onto that stage and the entire audience felt it. There was an incredible connection between Gavin and his fans that night, which is something only a true artist can achieve.

I’ve been a fan of Gavin’s music since the release of his first album. His talent and humble personality work hand-in-hand and make him the complete package.  I’ve been to several of his concerts and can say that his energy on stage makes each experience a very personal one. Gavin and his band interact with the crowd in a way that keeps you wanting more each time. For this reason he has extremely loyal fans, and many will travel far to see him live! If presented with the opportunity, please attend a Gavin DeGraw concert! Then you will fully understand what I’m talking about!

4 thoughts on “Gavin DeGraw: “He Serenaded Us All””