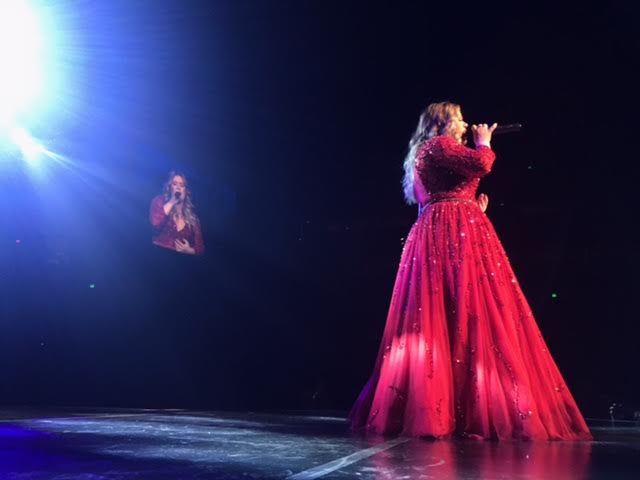 Nashville, Tennessee is also known as Music City. It’s the home of many popular concert venues, such as the Grand Ole’ Opry, Ryman Auditorium, and the venue I most recently visited, Bridgestone Arena, for Kelly Clarkson’s second annual charity concert, Miracle On Broadway, on Friday, December 16th.

Miracle On Broadway is an annual charity holiday concert put on by Kelly Clarkson and it benefits Nashville non-profit organizations.  This year, Miracle On Broadway benefitted Abe’s Garden, the Nashville Public Library Fund, Second Harvest Food Bank of Middle Tennessee and the W.O. Smith Nashville Community Music School, all which were handpicked by Kelly herself.  Reba McIntyre, Kelsea Ballerini, Hunter Hayes, Ronnie Dun, RaeLynn, The SteelDrivers, Charles Esten and Steve Warner were this year’s special guests. To say that Miracle On Broadway brought the holiday spirit would be a big understatement!

What makes Miracle On Broadway so special is that Kelly does not make any money from this show and every penny goes to those four Nashville organizations.  Throughout the show, videos of Kelly at the different organizations played for everybody to see, which explained what each organization was, what they do, and how you can help make a difference in your community.

Abe’s Garden is a care center for those with Alzheimers, which provides day care programs and residential programs for those affected with Alzheimers Disease or various types of dementias.  At the concert, Kelly introduced everyone to Brandy, a Nashville K-9 in training who will serve as an aid for Alzheimer’s patients at Abe’s Garden.

The Nashville Public Library is close to Kelly’s heart because her 2 year old daughter, River Rose attends the public library weekly.  In a recent press conference, Kelly said that she had no idea how progressive libraries are, and now that her daughter loves going to the library and interacting with other children, Kelly decided that she would give back.

Second Harvest Food Bank’s mission is to feed hungry people and solve hunger issues in Nashville.  Kelly set up boxes at every entrance of Bridgestone Arena for people to donate canned goods to the food bank. Kelly visited W.O. Smith Nashville Community Music School and spoke to the students about the power of studying music and how participating in her local choir changed her life.

Nashville was filled with magic on that Friday night, and so was my heart.  Knowing that this concert was put on solely to help others and remind everybody that this is the season of giving filled my heart with joy.  A night full of music and sharing stories had everybody leaving Bridgestone Arena feeling inspired, and I can only hope that everybody felt inclined to give back to their community.

Miracle On Broadway 2016’s boxscore will be announced within the month.