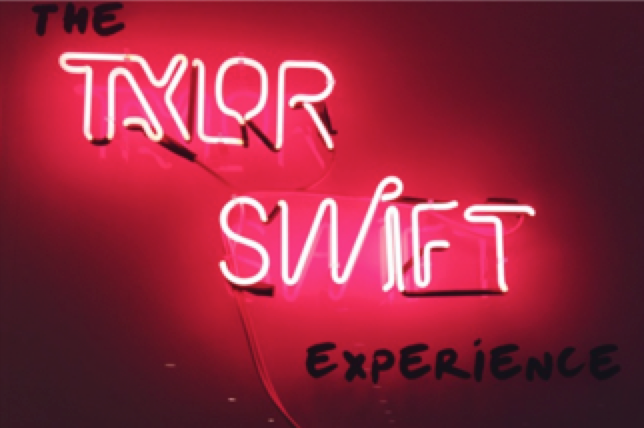 This past week I was able to check out the GRAMMY museum’s Taylor Swift Experience located in New York’s Seaport District. For only nine dollars the exhibit gives visitors and fans an inside look at Swift’s career, personal life, and much more. The two-story museum presents an opportunity to learn about all aspects of Swift’s life through interactive experiences, videos, photographs, awards, clothing, lyrics, and of course her music which blasted throughout the building.

When I entered the museum I was instructed to go up the stairs to the second level. The staircase was beautifully covered in magazine covers which featured Swift. This level held a majority of the interactive aspects of the exhibit such as a light up disco floor, a recording booth where you can sing your own version of ‘We Are Never Ever Getting Back Together’, a place where you can remix her song ‘Mean’, and the chance to listen to an in-depth interview. This floor also held a viewing room which played her iconic Grammy performances as well as her Grammy wins and acceptance speeches.
The first floor displayed everything from baby books and toys she owned to her elegant award show gowns. Also on display were guitars and pianos she used on tour, handwritten lyrics to ‘Teardrops on my Guitar’, ‘22’, and ‘Welcome to New York’, and even her 2009 Grammy award for ‘White Horse.’ It was amazing to see Swift’s belongings so up close. The back wall of the exhibit held stats for all five of Swift’s insanely successful albums.

Whether you are a Taylor Swift fan or not, it is hard not to recognize the huge impact she has had on the music world. This pop-up museum makes it clear that Swift is one of the most, if not the most, prominent stars in the industry. I strongly recommend visiting the museum regardless of whether you consider yourself the #1 swiftie in the world, or just a passive fan. The exhibit should be a great time for anyone and is only open until February 19, so make sure you stop by to learn more about Taylor Swift’s incredible career!