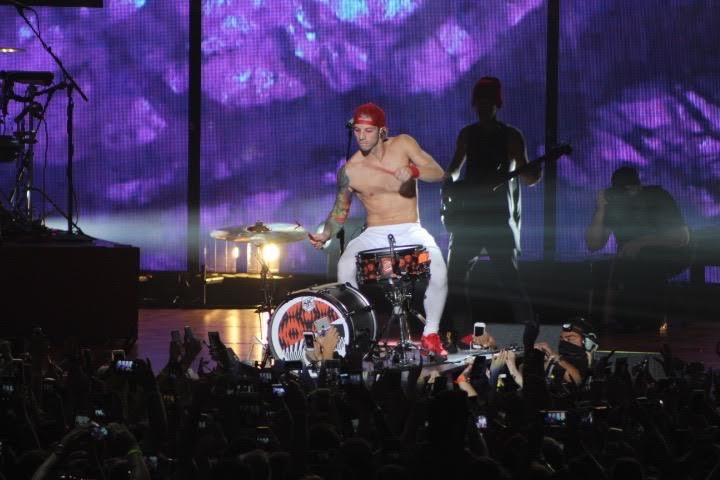 I would like to start by simply saying that the band Twenty One Pilots has helped me through so much in my life. I’m aware of how cliché that sounds and the fact that everyone says something to that effect about their favorite musicians, but I really do mean it. Over the summer I struggled with some painful life events and listening to Twenty One Pilots helped me want to push forward. I’d known for months that I would be seeing them in August at MSG, which was a huge deal for them, and an even bigger motivator for me to get my life back on track.

When concert day finally arrived I wound up having the best time of my whole life. I’ve attended around 30 concerts in my 17 years of living and that one was my absolute favorite. Twenty One Pilots knows how to put on an extraordinary show and the fact that it’s just the two of them completely blows my mind. They do things that no other artist or band does, whether it be running through the crowd in an inflatable ball or showing up in random sections in the audience. They left me completely stunned and I knew I’d have to see them again whenever they came back to NYC.

When additional tour dates for The Emotional Roadshow Tour were announced and New York City was included, I bought tickets in a heartbeat. I found out about it as I was walking home from school with my sister and I remember literally falling to the ground out of excitement. I was so happy that I would get to experience the show all over again. Last time  I went with friends, but this time I decided I’d bring my parents along and show them what a great show they put on.

Since the concert date was a week before my dad’s birthday, my sisters and I chipped in and bought him a ticket. My parents were truly amazed and stunned by how much energy the guys put into the show and how unique the Twenty One Pilots experience is from other concerts. There’s nothing better then singing your heart out to such meaningful words with thousands of other people. Nothing can top that.

The show started with the intro to ‘Fairly Local,’ and then went on to ‘Heavydirtysoul,’ which had me out of breath by the end because of how fast Tyler sang the words. Although the show mainly consisted of high-energy songs, there were a few moments where I found myself tearing up, with phones lighting up the arena as ‘Addict With A Pen’ or their cover of MCR’s song, ‘Cancer,’ was played. They also invited the opening acts back on stage to sing a few older songs, which made people like my dad feel like they were young again. It all came to an end with the song they always close with, ‘Trees,’ which is truly the perfect end to Twenty One Pilots concert. Confetti and smoke blew everywhere as the show ended and I was at a loss for words.

Overall, experiencing live music is something that will never get old and I am truly grateful for it in all of its forms. However, these two shows in particular were ones that I will NEVER forget. I’ll look back on these nights when I’m old and tell my kids about my favorite band, Twenty One Pilots, and I’ll rely on these memories to cheer me up whenever I’m feeling down.