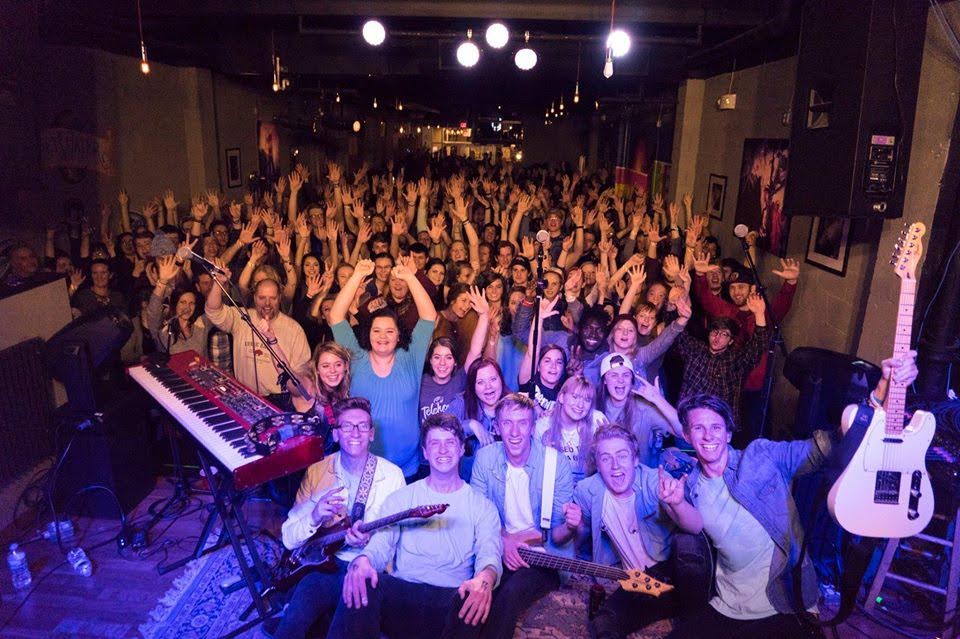 Telehope, an indie pop band from Cincinnati, Ohio came together to express themselves through music by demonstrating that hope is always near, despite how far away it may seem. Each member began their career in music at a very young age by either learning an instrument or being surrounded by musically talented individuals while growing up. They express “indie pop” as a broad genre that allows them to not be “put into a box,” as each song on their new album Chasing Dreams is a different expression of themselves from song-to-song. Drawing influences from Adam Young, Chad Gardner, and Adam Hann to name a few, their sound is unique. Pouring their heart and soul into each song on their new album, they have created something special.

Give us a little background on yourself – how did you all start your career in music?

Mark: I grew up in a musically talented family. I was singing or whistling or doing something musical from 3 years old.

Brett: My parents gave me a drum set when I was 5 years old. I took some drum lessons, piano lessons, and three guitar lessons when my teacher dropped me and said I was better off teaching myself.

Adolph: I was first introduced to playing piano as a young child. I hated it and wanted to quit. After convincing my mother to let me drop, I didn’t touch another instrument for years. I quickly fell in love with playing guitar after hurting my back playing soccer. I haven’t put it down since. If you are truly passionate about something you’ll find a way to pursue and learn it, in my case, without music lessons.

Nate: I also grew up in a very musical family. My family’s gospel quartet would travel around to sing at different churches. I sang on their album when I was about 7. I picked up piano when I was 5 or so, and got my first drum set when I was 13 and started playing in my youth band.

Ben: My parents made all of my brothers and I take piano. Like Adolph, I hated it. My mom let me quit as long as I learned a different instrument. I wanted to play banjo so I took lessons for several years. That evolved into playing guitar, self-taught piano, and learning music production along side. Music production is one of my greatest passions. Through internships, online programs, and my freelance music business I’ve been learning how to produce for Telehope.

What inspired you as a group to pick indie pop as your genre of music?

Adolph: We picked “indie pop” as a genre because the guys wouldn’t agree to label our sound “Dark Norwegian Black Death Metal.” Just kidding. I believe we live in an age of music where the word “genre” is dying because of the way music is consumed and because of how open people are becoming in regard to music styles. I think it’s getting progressively less necessary to classify under a specific genre. “Indie Pop” seems relatively broad and seems to fit our style pretty well. Our album Chasing Dreams sounds very different song-to-song and we like it that way. Moving forward we will continue to write the way we want regardless of the genre. We just don’t want to put ourselves in a box.

What has been your favorite performance to date and why?

Mark: The album release show for Chasing Dreams was definitely my favorite performance to date. The crowd was fantastic and I had an amazing time. Being able to share my passion for music through that show was incredible.

Ben: We used to go under the name Undivided and played many shows until we changed our name to Telehope. The Chasing Dreams album release show was the first official Telehope concert, and I think we can all agree that it was the most exciting show we’ve ever played. We put months (and years) of really hard work into that night. We wanted to start out this new band with a bang and we did. Our goal for months was to sell out our release show concert, and we achieved that. It’s a great feeling to see goals be achieved in such a short time.

Being from Cincinnati is so cool! Are you planning to relocate and venture out to different audiences or stay within your local scene?

Ben: I had the amazing opportunity of living in Nashville over the summer of 2016 and interning at a producing studio. I fell in love with the town and wanted to move there to start Telehope’s music career and my studio career as well. Halfway through the summer I realized that Cincinnati’s music scene was so ready for another catchy and poppy band to take it over. To me, the music market seems so fresh. Our goal is to rise to the top of the Cincinnati music scene and branch out from there once we have a significant following. Eventually I’d love to take the band to Nashville, but until then we’ll work hard where we are.

What is one message you want to send to your fans and why?

Ben: When Adolph suggested to me a year ago that we change our band name I agreed as long as we involved the word “hope”. Our whole purpose with Telehope is to bring hope to those who have little and encourage people to keep pressing on no matter how hard life may get. Telehope is a combination of telescope and hope: it means looking to the hope in the distance and drawing it near.

Who would you like to perform with in the future?

We would all love to tour with COIN, Walk the Moon, Jon Bellion, Colony House, Mutemath, Owl City, CRUISR, and many more. The goal for the next year is to get involved with a well-known artist and open on tour for them.

Indie pop is such a fun and popular genre, what influencers does the band look to for inspiration?

Nate: Mark is influenced vocally by Casey Crecenzo and Chad Gardner, and by Guthrie Govan, and Paul Gilbert on guitar. Quest love, Darren King, and Buddy Rich are all huge influences to me.

Ben: The reason for my passion for music is because of Adam Young (Owl City). We have similar stories of having insomnia as a teenager and using that time late at night to create music. I fell in love with his ethereal music and his musical story. I’m also incredibly inspired by COIN, Walk the Moon, and Ben Rector.

Congratulations on the release of your new album! How did it feel to complete it and see it come to life?

Mark: Thanks! Chasing Dreams is a showcase of all we’ve learned as a band. It’s the most incredible feeling seeing all that come to fruition.

Adolph: We have been working on our debut album Chasing Dreams for almost two years now. It was a long, unbelievable process filled with joy, insomnia, and great aspirations. Quite often we would disappear into the studio like a ghost for hours and hours each day. This album has our heart and soul in every detail and we are very pleased with how it turned out and blossomed. There were times during the process where it felt like we were going backwards, or had battles with writing lines and melodies, but we persevered and couldn’t be happier.  Our friends, families and fans have really resonated with the album and it feels amazing to have such a positive response.  We are very excited and feel a great sense of accomplishment with this album, but we can’t wait to get back into writing and recording and releasing our next step as we chase this dream of Telehope.

Ben: The release of Chasing Dreams has been surreal. Coming at this album from the point of writing as well as production is really interesting to experience. On one hand it has been absolutely incredible having total control over what gets recorded, how the song is mixed, and what the final product looks like, and on the other hand it has been terrifying at times having that much control, wondering if it’ll ever be done. After setting personal deadlines I was able to call the songs “done”. By the time the record was released I was already thinking about album number 2, which we expect to release early summer 2017. We can’t wait to write more and develop the Telehope sound.

What can we expect to see next from the group?

Ben: You can expect Telehope to play many shows this year and release more music than ever. Right now we are preparing for our second headlining show, which will be Friday, February 24th at The Underground in Cincinnati. It’s also maybe just a little bit helpful to have our own studio for personal use whenever we need it. We’ll be working hard in and out of the studio pushing Telehope and our message of hope to people. You can probably expect some Metallica cover videos by Brett playing accordion, recordings of lamps, water-glasses, and the occasional chair from Adolph, more hurt “fingee’s” from Mark, and a new twitter account from Nate called “I Just Broke 76 Drum Sticks During Rehearsal”. You won’t want to miss this year of Telehope.