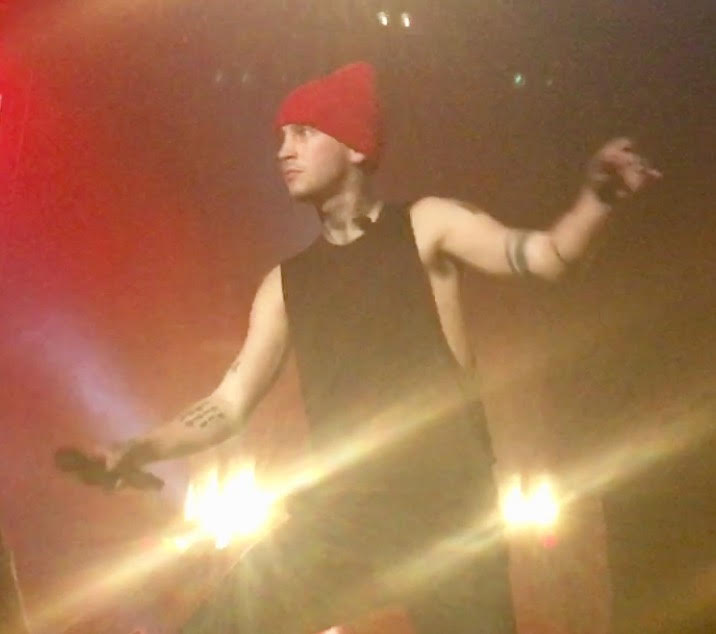 I was lucky enough to see Twenty One Pilots at the Times Union Center in Albany, New York on January 25, 2017. I knew people were camping out, so I had to arrive early to get a good spot near the stage. Finally, the doors opened at 6pm and allowed the herd of excited fans inside the arena.

There were two opener’s. First were Judah and the Lion, who charmed the audience with their almost folky alt/rock sound.  After winning the audience over they made room for the second opener, Jon Bellion and his band. These guys got the crowd pumped up and singing loud, setting the stage for what would be an epic night with Twenty One Pilots.

Tyler and Josh came out in red blazers and ski masks and opened with a ‘HeavyDirtySoul’ and ‘Fairly Local’ intro. The intro was followed by ‘Migraine,’ ‘Hometown,’ and a mash-up of ‘Message Man’ and ‘Polarize’ before rocking the stage with their hit, ‘Heathens.’

Already exploding with excitement, Tyler came out dressed in his classic round white glasses and flower kimono along with his ukulele and I just knew the audience was in for a treat. They played ‘We Don’t Believe What’s on T.V.’ with the ‘House of Gold’ Intro, ‘Screen/The Judge’ and ‘Lane boy.’

The duo already had the audience in the palm of their hands before moving to the B stage and performing ‘Ode to Sleep.’ They slowed things down a bit with ‘Addict With A Pen’ and a cover of My Chemical Romance’s ‘Cancer’.

All eyes were back on Josh at the main stage where we saw what appeared to be a drum battle, or a “drumversation” with himself, which was displayed digitally on the screen next to him. Of course, the real Josh won the battle causing the other Josh’s head to explode.

After the jaw dropping, head exploding drum battle, the pair played ‘Holding On To You’ and Tyler relied on the audience to hold him up. Before they finished their set they invited their opener’s onstage to perform covers of hit songs like Chumbawamba’s ‘Tubthumping,’ Black Street’s ‘No Diggity’, ‘Where is the Love’ by the Black Eyed Peas, and even House of Pain’s ‘Jump Around.’

I know you’re probably wondering how the show could get any better, but it did! The unstoppable pair decided to play ‘Ride’ and Josh came out on a drum platform being held up by people in the pit! I’ve seen this at the other shows, but to be up close and personal is a totally different experience. As if the fans weren’t already excited enough, the guys performed ‘Stressed Out,’ ‘Guns For Hands,’ ‘Tear in My Heart,’ and ‘Car Radio.’ The set was already long, but it wasn’t over. The guys finished the show with ‘Goner’ and the ‘Traditional Trees.’

Overall it was an amazing night and well worth the 8-hour wait in line to get close to the stage. If you ever have the chance to see these guys live, please do it. Whether you are across the arena in a seat or you’re sweating in the jam-packed pit, Twenty One Pilots will not let you down. That’s a promise.

2 thoughts on “Twenty One Pilots: “They Will Not Let You Down. That’s A Promise.””