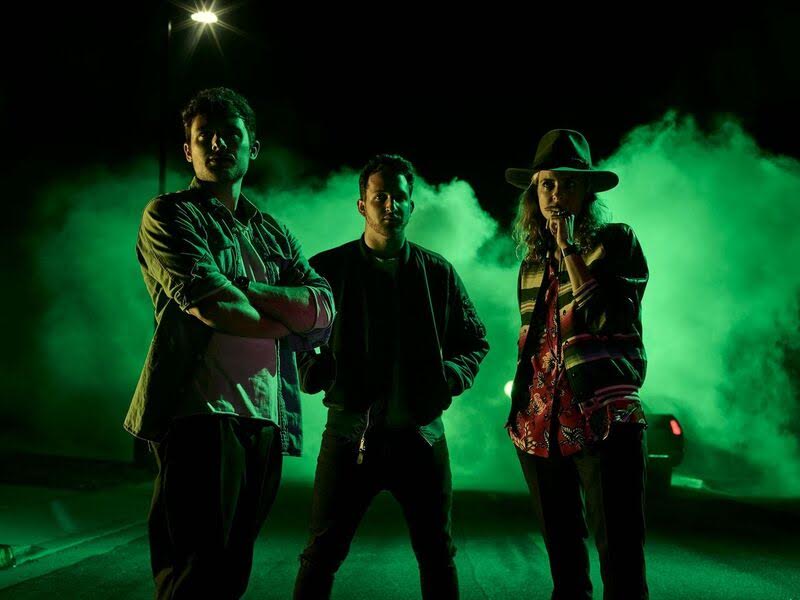 I got to talk to Ethan Thompson, one-third of the sunny L.A. band Ocean Park Standoff. Their hit single “Good News” video was recently premiered on Conan O’Brien Presents: Team Coco, and the trio is getting ready to release their highly anticipated EP this March. They are also currently touring and are set to tour the nation this summer. Their eclectic, chill vibe mixed with catchy beats makes their music the perfect added edge to your day at the beach. My personal favorite, “Photos & Liquor,” was inspired by a seemingly romantic picture of Thompson kissing his ex, when in reality the photo was captured during a fight. The addictive melody about distorted memories has skyrocketed to popularity alongside “Good News” which already has over 2 million listens on Spotify. Singer/ songwriter Ethan Thompson, along with internationally famous DJ and musician Samantha Ronson and producer/ drummer Pete Nappi have been creating something incredible along the Los Angeles coast that you won’t want to miss.

How did you all initially come together?

Pete and Samantha got linked up through managers and publishers. After they kind of hit it off, they had me come in. The first couple days together we wrote “Lost Boys,” which is gonna be on the EP coming out in March, and then we wrote “Good News,” the single. We didn’t know it was gonna be a single, at the time we were just writing for fun. And that’s kinda how we first connected, was writing those first few songs and after that we kept writing together for the next eight, nine months.

So your EP is coming out in March, what was your inspiration for putting that project together? Was there anything specifically fueling it?

Yeah, with the music it was always gonna come together—we kind of have therapy sessions with each other. We would meet up and we would all have different things going on, we’re all at different places in our lives, we all are doing our own artistic things, but we would all come together with our frustrations in life and all talk to each other about what was going on and that’s when we were really first bonding—in those little therapy sessions we were having. We’d sit there and talk through different things that were going on in our lives and then at the end of it we’d write a song, like a reflection. That’s basically what was driving the music, it was just kind of therapeutic.

I read somewhere about the story behind “Photos & Liquor.” That’s kind of cool, about the picture. So, it’s kind of things like that—using things in your daily life to create the lyrics.

100 percent, yeah. And also just off of kind of glorified memories as well. We’re always asking ourselves, ‘what’s the song about?’ And we really try to delve into as much feeling in a song as we can.

The three of you have kind of different backgrounds, so how has bringing together all of your different musical strengths and differences been working out for you guys?

It’s been awesome. You know, of course we all come from different backgrounds so sometimes we’ll have our little battles, but it’s one thing that’s very interesting about the forming of this project and the forming of this band, is just the fact that we’re slamming our three different worlds together and it’s making something very unique that I personally haven’t heard before and it’s why I was so attracted to it. We have our personal differences; we also have things that make us alike. We all have three very strong heads together, you know, there isn’t a designated leader, there’s different people driving different songs. And having the three worlds slam together has made something really unique that I’ve wanted to explore more and more and more.

And what about being based in L.A., how does that influence you guys?

Oh, it totally influences us. I mean, our named is derived off Ocean Park, the street that is right next to Samantha’s house which is where we had our sessions everyday. It was actually her bedroom and she actually converted it into a studio. We moved her bed out and set up shop in her bedroom, which was like a white room with a bunch of windows with sunlight coming in through and so we definitely had that affecting us everyday and I think that’s why we have a lot of brightness coming out of our songs—the fact that we were in this bright, sunny room everyday creating music. There’s also a lot of innovation in L.A. and then it’s also very calm and cool, so we could have a good time while we were writing.

Right, yeah. What would you call your genre? You guys are unique—you’re kind of a blend of a couple different things.

[Laughing] The only term that we’ve agreed on that matches our songs is ‘progressively uplifting.’ I think it’s got a little bit of hip hop, a little bit of ‘80s and the lyrics are very old school rock [because] there are lots of stories in them.

Right, we’re like, let’s just have fun and do whatever comes to us and then push for whatever sound we think is fun and speaks to us at that time.

So your EP is coming out, what else are you guys planning for the future and what else do you want to happen in the future?

We just want to get on the road and play. We’re actually doing a tour in February with LOLO going across the East Coast and Midwest and we just got a tour for two months over the summer all over the nation [and] dipping into Canada. We just want to spread our music and meet as many new people as we possibly can.

Do you think you’ll ever go to the U.K.? Because of Samantha and her brother?

Oh, I sure hope so. I would love to go to the U.K., I’ve never been over there. As I kid, travelling beyond the backyard was something I never thought of, so now, with the opportunity to move around, the U.K. is definitely something we have our eyes on.

If you had to pick one artist or group that you could picture yourself collaborating with, who would it be?

Nirvana—that would be pretty awesome. Those guys just seemed like they were so free in everything that they did. I know they probably had their own stresses, but they seemed so free in their creation that it would be fun to play with them.

What other bands or groups do you see as an inspiration? As a songwriter?

A huge inspiration for me is always Tom Petty. I always liked how simple his stories were, they were simple and had depth at the same time. I mean, “Free Fallin’” was something that meant so many different things to me personally, and the way that he wrote music and the way that he just thought about life—I would love to follow that. He’s just like a true G [gangster] when it comes to music.

When did your individual music career start?

I think that it really kicked off in 2010. I was going to school for classical training and I ended up meeting a couple friends and we started playing in a band together. My friends start dropping out of school and just like playing with the band, and all my professors were like, ‘You gotta be doing this, you gotta be doing that,’ and I was just like nah, I kinda just wanna play with this band. I was having so much fun. So it kind of started around 2010, that’s when it kicked off for me. It was just friends drinking in the dingy basement of someone’s house that was letting us use the space.

Do you have a favorite genre that you like to write for or sing?

That’s one thing that’s always been hard for me—I love singing for so many different genres. For me I feel like my focus, personally, it’s not my favorite to sing because I just love singing anything—anything you throw my way I’ll sing it—but this whole pop genre, a little bit softer, a little bit more sentimental is where I find my stride. But I love singing all genres—except musicals are not my thing.

What can your fans be expecting from your EP as they’re awaiting its arrival?

You can expect a lot of energy, a lot of good times. We like to have a good time, that’s kind of where we’re at right now. I remember there was an interview—I’m probably gonna blank on the name right now—he’s a rapper, he said he likes to make music that’s party and ponder. It’s kind of in between that, where you can have a good time listening to it but when you really listen to the music we’re talking about things that happen in life and movements in the world. That’s kind of where we like it to be, kind of a celebration of the world but then also a reflection of life. Lot of good stuff coming up.

Anything to say to your fans?

Thank you so much for listening and holding on and waiting for us, we know it’s been a big gap between “Good News” and the EP coming out. And after the EP comes out we already have another one that we’re almost done with that we’re hoping to be able to release before the end of the year. So it’s gonna be lot of music and a lot of shows coming up. We’re just work, work, working away!

One thought on “An Interview With Ocean Park Standoff”