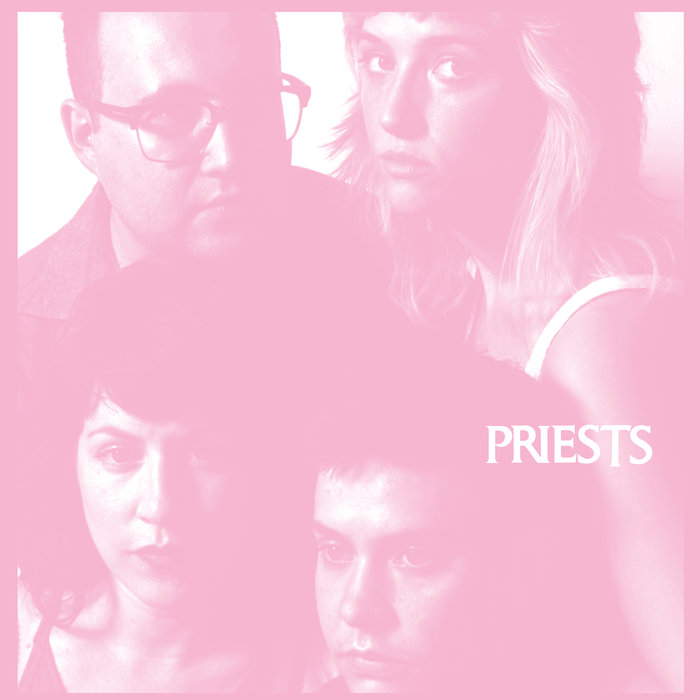 At the Women’s March on Washington, DC, the day after the 45th President was inaugurated, Scarlett Johansson delivered a seemingly obvious, yet easily overlooked, suggestion to a crowd of participants eager to defend civil rights. “I feel that, in the face of this current political climate, it is vital that we all make it our mission to get really, really personal,” Johansson encouraged her listeners. For years in the same city where Johansson recently spoke among senators, activists, musicians, and even TV news commentators, punk band Priests have been taking the same approach to dismantling oppressive systems: mix the viscerally personal with the painstakingly political. Whether on their three records to date—a 7”, two EPs, and a recent debut album—or live, Priests equate their daily experiences with the broader sociopolitical landscape.

It’s in songs such as “Lana” from 2013’s Tape Two cassette: here, Priests vocalist and lyricist Katie Alice Greer uses public opinion on Lana Del Rey to tackle two different issues. The political one: Greer throws shade at the double standards and over-policing that women, their bodies, and their choices receive in American society. The personal one: a lover possibly revealing himself to be just as unfairly judgmental, not giving Greer equal footing in their relationship.

It’s in their live shows, too: recently, to a packed crowd at Philadelphia’s hybrid-batting-cages-and-DIY-venue-spectacular Everybody Hits (the joke’s in the name), Greer laid bare her thoughts on how safe spaces function in the current political climate. Her viewpoint: although safe spaces have always been vital places of refuge from oppression, where progressive ideas can entangle and develop, now they’re also spots where people go to vent about the current regime in particular. The conversation isn’t peripheral anymore; it’s omnipresent, inescapable, even mainstream. Expressing a general sense of helplessness and, to use Greer’s own words, “bummed out”-ness, Greer disclosed how defeated she often feels these days, and then dedicated one of Priests’ most explicitly political songs, Bodies and Control and Money and Power’s “Right Wing,” to the widely supported cause of “Fuck Donald Trump.” (Naturally, cheers exploded from the crowd.)

Priests sure don’t sound defeated, though. Even though this is a band whose most recent EP spat on, shouted at, and stared down the world’s systems of oppression, new LP Nothing Feels Natural is the band’s most assured revolt against the status quo to date. It destroys the distinction between the political and the personal, abandoning the outright, fact-based lyricism of past Priests songs in favor of tales that feel universal. The story of Greer’s former crush “JJ” blends disbelief at one’s past emotions with the need for a conversation about toxic masculinity (“the most interesting thing about you was that you smoked Parliaments, the babyest cigarettes/I thought I was a cowboy because I smoked Reds” is one for the ages). “Suck” likewise fuses the general notion of a social statement and a personal plea into one; lyrics like “How can you tell that I always mean to be mean when you’re not even listening” read as yet another man talking over a woman and as Greer recounting a specific person’s frequent logic.

Those who have followed Priests since their debut 7” in 2012 might by now understand their whip-smart brand of monotonous humor—all Priests lyrics are available on their website in a section called “Learn Every Word To All Priests Songs”—and this too cleaves itself into the band’s essence. At Everybody Hits, in the moments when Greer addressed the audience, she often dropped simple but effective jokes that managed to get the whole room laughing while pointing out sour spots such as corporate influence (a True Value logo painted in the back of the room became the target of a particularly well-received joke). Not that Greer is the only Priest capable of humor: bassist Taylor Mulitz made sure to dedicate Priests classic “And Breeding” to “the guy who said ‘And Breeding,’” addressing the audience member who shouted the song’s name 15 minutes earlier and eliciting laughter from the whole room. And then “And Breeding,” the Priests song that reminds listeners that progressive hero and former president Barack Obama has too done some terrible things just moments after Che Guevara is name dropped, began.

So too does Nothing Feels Natural understand the need for levity to break up the whirlwind of heaviness. A song about the false promise of the American Dream, “Pink White House” (which in title alone implies a communist revolution), precedes a song titled “Puff” that overlays guitar scratches with the unforgettable shout of “My best friend says ‘I want to start a band called Burger King’/and I say ‘Do it!/Make your dreams/ a reality!’” Even within “Puff,” this contrast is key; this Burger King refrain falls before an intense criticism of Israel’s right-wing prime minister. On a spectacular level of its own in the fusion of humor and pointedness is “No Big Bang,” the one Nothing Feels Natural song with drummer Daniele Daniele on lead vocal. Daniele brushes her lyrics—which are notably more abstract than Greer’s—with comments on the notion of progress and the sincere feeling of regret, but the almost-rap like cadence she delivers them in somehow feels like a deliberately humorful choice.

If Priests’ humor is more apparent than ever on Nothing Feels Natural, that’s because it’s songs give it the room to bubble to the surface. Before the album, Priests were a punk band; now, they’re so, so much more. “JJ” sounds like what Ian Curtis might have made if he lived to hear Alvvays; “Lelia 20” is an oddly bopping post-punk tune sliced with strings and some of the most meditative vocals Greer’s ever committed to record; “Suck” ends in a barrage of brass and dance-punk cowbell. Even “Pink White House” and “Appropriate,” two of the most explicitly punk songs on the record, feel a step removed from the outright grit of past Priests works. Though “Pink White House” ends with the entire group yelling “smear it on the leaves!” with the force of an actual violent riot, its midsection is awfully quiet; “Appropriate” too toys with near-silence in the space separating its wretched first two minutes and its last 90 seconds of teetering saxophone, thundering percussion, and Greer’s unfettering growl.

Live, “Appropriate” sounds like it could slot in nicely on a sludge metal record. At Everybody Hits, Priests often played with such vigor and volume that viewers across the audience had trouble not opening up a pit. But even outside a venue as intimate as Everybody Hits, one too close for quasi-violence, Greer’s voice shelters Priests from being a unit of pure aggression. Nothing Feels Natural sees Greer relegate her much-beloved snarl to the periphery of her vocal lines—listen to how it only surfaces at the beginnings and ends of each line of “JJ”—often opting for vocals that convey her excellent sense of melody. On “Nicki,” she sings with fluid contemplation even as guitarist G.L. Jaguar strikes with his largest waves of force; on “Lelia 20,” she could be reasonably mistaken for a soul singer. And what’s craziest, Greer might even be holding herself back on these recordings; live, it’s clear that this is a singer with some pipes. Whether shouting into the microphone, standing on some unseen elevated surface above her bandmates, or staring an audience member directly in the eyes, Greer’s voice felt like it was emanating from every corner of the room, filling the space between the venue’s every molecule. She could’ve been on a blind audition for The Voice and easily advanced to the next round.

It’s difficult to argue that Nothing Feels Natural is anything other than Priests’ most accomplished moment yet—vocally, lyrically, thematically, performance-wise—and where better to look for proof of a work’s merit than its namesake? Just past the center of the album lies its title track, which is a spellbinding convergence of every advancement Priests has made. In a recent interview, Greer expressed happiness at the general consensus that Nothing Feels Natural “has a really sunny and light exterior, and what seems like a subtle, sinister undertone,” a contrast that its album cover, a pink-washed portrait of the band deep in thought, implies; naturally (pun not intended), its title track most strongly imparts this intentional disconnect. Greer’s vocals are nothing short of melancholy throughout, as she imagines the hells of solitary confinement over guitars that might not sound out of place on a slower Cocteau Twins song. A moribund bridge, one that would imply certain death even without its vocal refrain of “to people in sanctuaries, all I can say is/you will not be saved,” explodes into a two-part guitar harmony and a burst of powerful percussion that sounds like the sunrise emerging from clouds that have lingered for days. As this burst of catharsis propels forward, Greer’s vocals grow even more pillowy and depressive, transforming the end of “Nothing Feels Natural” into a dream pop-esque comedown.

“Nothing Feels Natural” is so innately breathtaking that it can be easy to miss its political commentary. At Everybody Hits, when Priests finished playing this song, they projected warmth and humility into the room. Equally devastated and inspired, showgoers applauded, unsure what else to do with their bodies after such a heavy experience. Later that night, many likely took a stroll to a nearby bar to catch up with friends over light drinks; the next day, some likely heeded one audience member’s advice to show up for a pro-immigrant rally the next morning. In the days and weeks following, protests have continued across the country. Guess who was probably there?