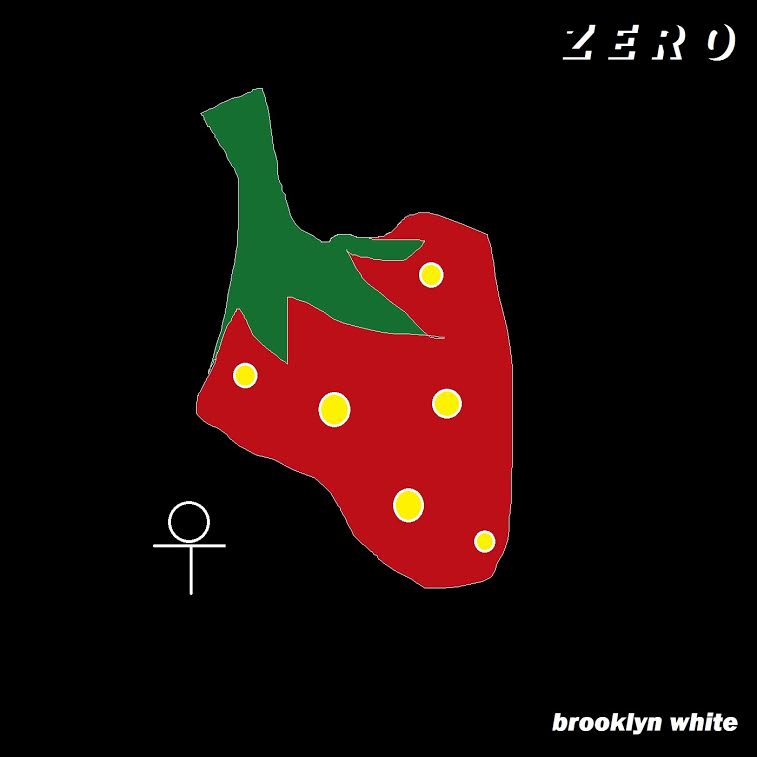 “I’m Tellin’ U” by Brooklyn White

“I want people to know that they don’t have to keep taking romantic L’s. You can take your soul back and go on to become a blessed up, hydrated angel,” says Brooklyn White of her liberating track “I’m Tellin’ U.” If you’re getting out of a bad relationship, know what it’s like to be in one or just celebrating what it means to be an independent woman, “I’m Tellin’ U” is your new theme song. The track is both provocative and brilliant and the clear highlight off her five-track Soundcloud release titled Zero. The artwork for Zero is a strawberry (made by Brooklyn herself) and I noticed that on social media, and in other designs, she uses the symbol often. When I asked her what the fascination with strawberries was, she replied with “the strawberry is a cardioid, a heart shape that appears often in nature and has come to symbolize the human heart and love. To me, it’s the ultimate symbol of passion. Strawberries also represent rebirth according to The Seneca Native American tribe, since they are among the first fruits to ripen in the spring. So strawberries are everything that I want to be; regenerative and full of love.”

Brooklyn is originally from Shreveport, Louisiana, but currently resides in Brooklyn, New York and she is off to a damn good start. Her wisdom and desire to empower the women around her leaves me certain that if you don’t know her name now, you will by this time next year.

Julia Michaels. You’ve never heard her name before, but you’ve definitely heard some of the songs she’s written. Just to name a few, the 23-year-old songstress is behind mega-hits like“Sorry” by Justin Bieber, “Good for You” by Selena Gomez, “Love Myself” by Hailee Steinfeld, and Ed Sheeran’s recently-released single “Dive.” She’s now ready to take center stage with her first solo single “Issues.”

of melodies with Michael’s unique voice singing “I’m jealous, I’m overzealous / When I’m down I get real down, When I’m high I don’t come down.” She flows softly from one lyric to the next, hitting each note effortlessly. Michaels displays a vocal versatility that most pop artists are lacking even multiple albums into their career. The best part is that her lyrics are brutally honest, “it was the first time I’d written a song that sounded so much like myself that I couldn’t picture anyone else singing it,” Michaels said. According to Michaels, many industry titans fought for it, but she kept it for herself. In the chorus she admits, “Yeah, I got issues/ And one of them is how bad I need you.”
With the unique production, versatile vocal delivery and the relatable lyrics, I’m left wondering how has she been behind the scenes this whole time? Whether it’s behind the scenes or center stage, Michael’s is here to stay and pop music should be grateful.

Anxiously ascending instruments take flight with the help of thriving drums and suddenly the new Girlpool track “123” unlocks into a blissful finale. Harmony Tividad and Cleo Tucker continue to provide chemical balance when their voices rise together at the climax of “Looking pretty at the wall/ O, my mistaken love installed/ While the moth doesn’t talk but in the dress the holes.” The pair sing about the crippling uneasiness of a new relationship and shared a new music video that is the visual testimonial of this particular experience. In the video, Turker battles inner fear that is symbolized by her constant bleeding and hiding. The romantic and grotesque ending leaves us in anticipation of their upcoming project called Powerplant.  Watch the video below:

Although DJ Khaled didn’t win a Grammy this year, that didn’t stopping him from dropping a surprise single shortly after. “Shining”, was co-written by PartyNextDoor and is the first single off of DJ Khaled’s next album Grateful. The song brings together the star power of Beyoncé and Jay Z for quite the catchy tune. “I worked my whole life for this one,” Khaled declares in the beginning before Beyoncé takes over.

“Shinin’, Shinin’, Shinin’, Shinin’, yeah, All of this winnin’, I’ve been losing my mind,” sings Beyoncé. She manages to do it all in this song. She’s sings triumphantly about “winning” these past 20 years; and even though she’s part of a power couple, she’s held it down completely by herself, “Money don’t make me happy / And a fella can’t make me fancy.”

As usual, DJ Khaled is his own hype man and his ecstatic ad-libs are sprinkled throughout the song. Jay-Z chimes in with his usual swagger and sophistication. ”Ran to the dealer, bought twin Mercedes / The European trucks for the twin babies / Don’t let me have a son, I’m a fool, Send him to school in all my jewels, haha/ I want a boy and girl to fight for truth.” I’m glad DJ Khaled brought these two together for another great collaboration. If you’re ever feeling doubtful about yourself, make sure to blast this song full volume wherever you are.

“The End of the World” – Sharon Van Etten

I know I’ve said in the past that most covers are tacky, but here I go again, recommending a cover. “The End of the World,” originally recorded by Skeeter Davis in 1962, caught my attention when it was featured on the Mad Men soundtrack during Season 3. This time, it will be introduced to many for the first time as part of a different soundtrack, courtesy of singer-songwriter Sharon Van Etten. The soundtrack, to be released on April 6th, will be for The Man In The High Castle, an Amazon series based on the Philip K. Dick dystopian novel set in a future where Germany and Japan won World War II. “The End of the World” will be featured in the show’s conceptual soundtrack titled Resistance Radio.

I’d like to find whoever selected Sharon Van Etten to cover “The End of the World” and personally thank them. In her 2017 cover, she brings a sultry and gloomy essence to the country/pop classic. If you consider the lyrics to the song and Sharon’s trademark darkness, you’ll see it is a perfect match. Other covers being re-imagined for the Resistance Radio project will include appearances by Angel Olsen, Beck, Norah Jones, Kelis and more.