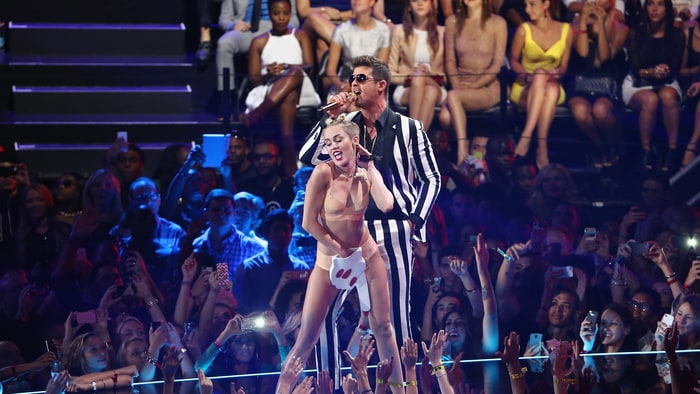 Not so surprisingly, sex seems to be the main theme in almost every popular song today. This could be for a variety of reasons. First and foremost, sex is something that most people can relate to, which makes it a go-to for artists when deciding on subject matter. Secondly, that old saying, “sex sells” is still very much alive and well. And lastly, it could just be an easy topic for songwriters to write about! Whatever the reason, these songs are coming out of studios and flying into top-40 radio like hotcakes!

There are certain artists who are known for writing strictly about sex, including Usher, Chris Brown, Trey Songz, Rihanna, Beyoncé and many more. I personally believe that their music is popular because sex is what draws listeners in. Even when you go to one of their live shows, the dancing and other details of the show are often times very sexual, and the fans love it!  I mean, no one can forget Miley and Robin Thicke’s 2013 VMA performance, or Katy Perry’s video for “California Gurls” when she shoots whipped cream out of her boobs!

Rap and R&B music in particular is typically very sexual, and almost every song has at least one verse that has to do with sex. This type of music goes way back to when Marvin Gaye and Jimmy Hendrix were still making music. Obviously, back then music wasn’t as explicit as it is now, but it still got the point across. Then again, there is a big difference between music back then and music now, because music back then was mainly about love (AW!). If by some chance you are tired of listening to songs that are only about sex and want to change up your playlist a bit, here’s a playlist of songs NOT about sex!