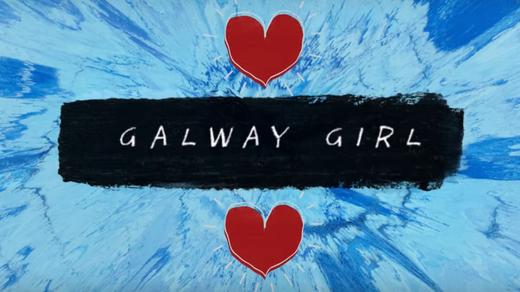 We already knew that Ed Sheeran can do it all.  He sings like an angel, writes songs like no other, and plays guitar with such a passion.  Now, he can add another title to his expertise: director.

“Galway Girl” off of Sheeran’s new album Divide is an upbeat, party song that makes us want to be in Ireland, and we now have a video to go along with it.  From the first line, it is such a magestic story, and being able to see Ed’s vision brings the song to life on a new level.

The story behind the video is very personal.  Ed has a friend who is married to a woman who plays a fiddle in an Irish band, just like the first line states.  From then on, he created his own story, and we see the adventures throughout the video.  It is incredible that this single idea was able to create such a beautiful story.

While filming this video, Ed goes through the streets of Galway, Ireland with his love interest for the music video, Saoirse Ronan.  We see a man play guitar, a group of female dancers, and the overall vibe of the city. It was incredible to see a story that is very real, rather than one that is forced through a song. Ed keeps his music very raw, and I think this video encompasses that.

By the end of the video, not only do we see a night out with Ed Sheeran, we get to see live footage of a real Irish night. I seriously want to go to Ireland now….can the country’s tourism board use this as a promotional video?