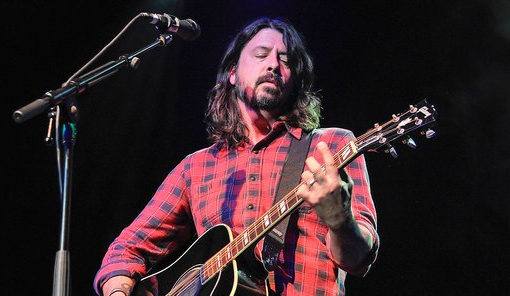 This past Monday, May 15th, the Foo Fighters performed at the ‘Acoustic-4-a-Cure IV’ benefit concert that took place at The Fillmore in San Francisco, CA. The audience was in for a big surprise as Dave Grohl announced that the band would be debuting a brand new song, telling fans, “I figured on the way up here, fuck it, let’s play a new song man.” The band’s most recent release was the Saint Cecilia EP back in 2015. The crowd roared as he introduced the track’s title, “The Sky is a Neighborhood.” It was obvious that fans were ready for a new Foo tune.

The song was performed acoustically, specifically showcasing Grohl’s token raspy, rock-and-roll voice. Who’s to say if that is how the official release will sound, but it sure does perform well, given the bluesy-unplugged feel. The chorus repeatedly says, “gotta get to sleep somehow, banging on the ceiling keep it down,” implying that life can sometimes be too loud and doesn’t give you a break. The performance was recorded by some concert-goers and can be viewed in the video below.

The Foo Fighters are set to headline some major festivals this summer including Glastonbury, BottleRock and Lollapalooza Berlin. In addition to this, they have just announced some brand new tour dates for 2017. The Seattle-based rock band will be performing a few shows all over Asia starting August 22nd.

“The Sky is a Neighborhood” is likely to be from their rumored upcoming album. There have been no official statements regarding new music, however the band members have dropped hints in certain interviews and appearances. In a recent article from NME, guitarist Chris Shiflett said, “We’ll make a new album when the time is right. There will be a new Foo Fighters at some point.” What do you think, is this new release an indication that something big is coming?