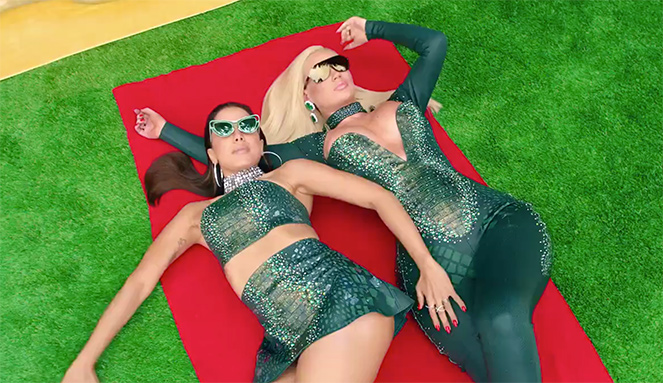 Iggy Azalea dropped her new single, “Switch” last Friday and to be honest, it seemed like many of us weren’t expecting much from the new release. It’s been downhill for Iggy ever since the release of “Beg For It,” and although she’s tried to release some hits, they just haven’t done well on the charts. Since Iggy’s racist and homophobic comments resurfaced around the end of her peak, many people stopped listening, which had a big impact on her decline. Ever since, her record company has been working relentlessly to recreate her image and her new single “Switch” is supposed to be what turns it all around.

Surprisingly, my low standards for “Switch” were exceeded and I’ve found myself listening to “Switch” on repeat! It’s almost opposite of what I was expecting and I’m quickly starting to love it more and more… and I think you will too! “Switch” may just be the song to bring Iggy back into the game.

After “Mo Bounce” flopped miserably, I personally didn’t think Iggy was going to be able to redeem herself. I was expecting “Switch” to have a annoying techno beat and lyrics that were extremely repetitive, similar to “Mo Bounce.” However, when I heard the drum beat at the start of the song, I instantly knew I was wrong. The song contains a Latin/hip hop inspired melody and a phenomenal dance beat.

I also didn’t expect the song to have good lyrics, but to my surprise the lyrics completely shocked me and flowed perfectly with the song. They aren’t very deep lyrics, but Iggy never has been one to delve into the idea of incredibly deep song topics. I think that for Iggy, these lyrics were some of her best. One big issue that reoccurs in Iggy’s music are the annoyingly repetitive choruses. This was at an all-time high in her last single, “Mo Bounce”. However, the chorus of “Switch” wasn’t too repetitive, but it was also just repetitive enough to get stuck in your head.  I for one know that I’ll be singing the chorus aggressively in the shower.

The song ends with a huge bang when Iggy reworks a tune from one of my favorite songs of hers, “Work,” into the song. Although Iggy is trying to renew her image, I think this throwback to “Work” was a great idea because it reminds fans why they loved her in the first place. That song was released in her prime and she will forever be recognized for it. My jaw just about dropped when I recognized the tune. Other former Iggy fans listening to this song may feel nostalgic and it may inspire them to re-add her to their Spotify playlist for the summer.

Even though the song was released just last Friday and hasn’t had much time on the charts, I’m confident that it will do better than “Mo Bounce.” While it’s still unclear  whether or not this song will beat out Iggy’s big hits like “Black Widow” or “Beg For It,” I’m hopeful that it’ll make it’s way up to the top. The single has a lot of potential and has all the requirements to make it a smash hit. If this song charts well I can see it becoming an anthem for summer 2017, which would be ideal for Iggy as she tries to get back on top.

I can’t imagine a much better comeback for Iggy after her decline than “Switch.” If Digital Distortion, Iggy’s next album, is anything like this single, I’ll be playing it on repeat for sure. I love the combination of the sassy/sexual lyrics and the hip-hop dance tune. Iggy definitely achieved her goal of having a song which “could be fun to dance to, but the lyrics when you really listen to them are very powerful,” (People.com). You can buy “Switch” on iTunes or listen to it on Spotify.