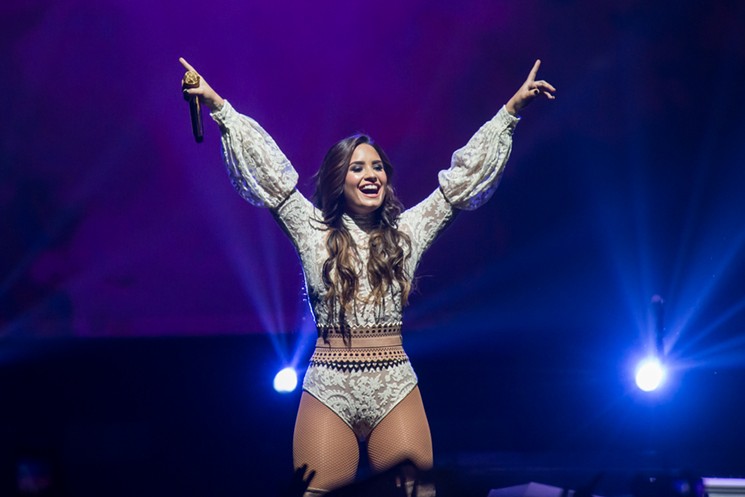 It’s no question that Demi Lovato has BIG talent, but what’s not as clear cut is how her music performs on the charts. More often than not, Demi always seems to be just short of snagging the top spots with her music, leaving us wondering if she’ll rise up with her next release .  Demi’s last album, Confident, came in at number 2 on the Billboard Hot 200 right behind Pentatonix.  It was also in the top ten on iTunes in multiple countries!  Nowadays, that’s unfortunately not enough to secure a position in the mainstream pop group.  People like Selena Gomez, Katy Perry, Bruno Mars, and The Chainsmokers seem to always reach the top of the leaderboard, so why not Demi?

There could be a million reasons in the world why Demi never quite makes it there, but for her and many other popular musicians, chart positions simply do not matter.  Demi got a Grammy nomination for her most recent album, and just about everyone knows that she is an insane vocalist.  Her new album, rumored to be out later this year, may not make it to the top, but what truly matters is that she’s evolving as an artist and is proud of her work. Also, her global fanbase is so loyal they will love her new music all the same!

When asked about what this album would be like, Demi said, “It’s more soulful and I want to go more R&B with it.”  Tons of people have been wanting her to do branch off into R&B, claiming that the is the genre is “made for her.”  She’s covered Aretha Franklin, Michael Jackson, Ray Charles, Adele, and more with a more soulful singers, so why not try it out for herself?

Throughout Demi’s discography, she’s tapped into many genres including rock, pop, and a little R&B, but perhaps she needs more! The reason she may not be getting all those number 1’s could be because she’s not releasing the music she’s meant to be making.  Later this year, when she (hopefully) releases her sixth studio album, we may see her climb quickly to the top because R&B may just be the perfect fit.

In reality, the top of the charts are not the end all be all. Time and time again, Demi has proven that she can hold her own in this industry… even without being at the absolute top.  In the end, music isn’t entirely about who charted higher and who sold more. Demi is mega talented, and her next album will most likely reflect that, just as her last albums have done.

As a massive Demi fan, I can very confidently say that Demi deserves all the success in the world, and her real fans are well aware of the talent she possesses. Demi doesn’t need all the praise in the world to know that she stands out among the rest. Her voice stands on its own and I personally cannot wait to hear some new music and crazy vocal riffs out of Demi.

Will you buy Demi’s next album?  What do you think her next release will need to shoot her straight to the top of the charts? Tweet us @soundigest with your thoughts!