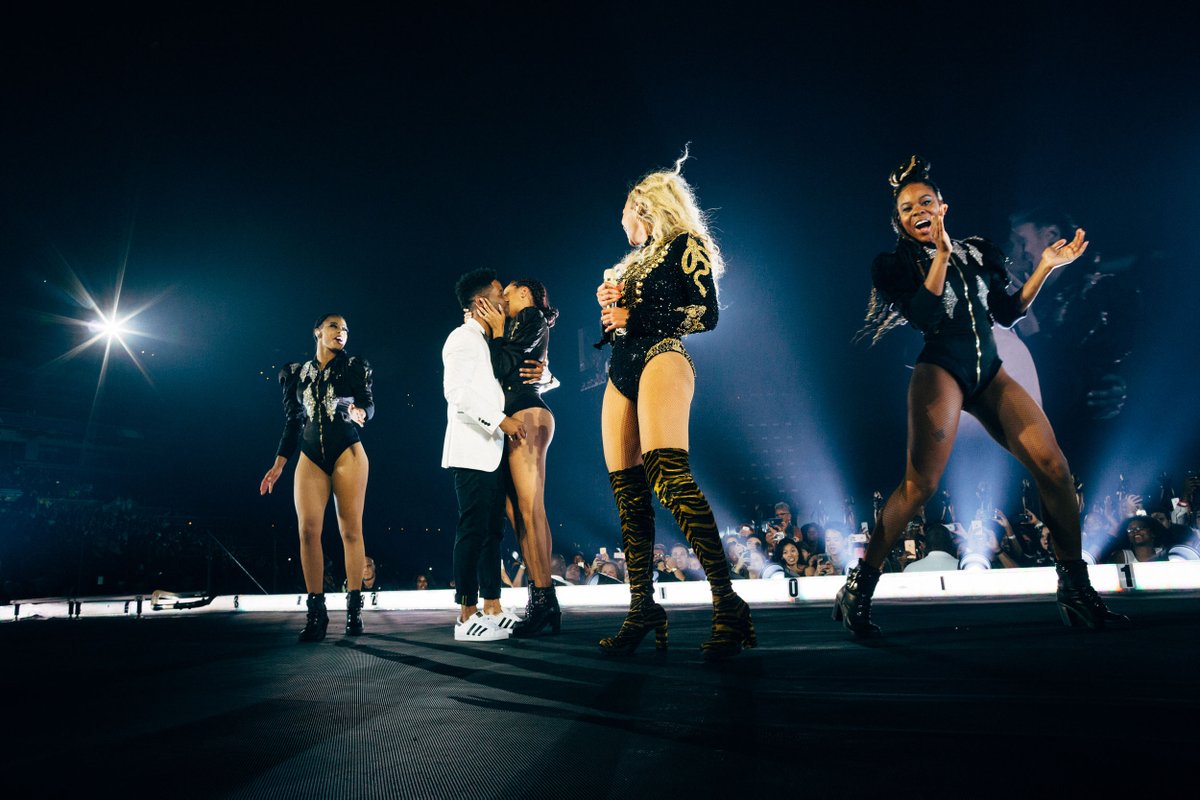 Wedding proposals happen at concerts all the time and prove to be some of the most romantic and epic means of professing ones love. Not only are you putting it all on the line by asking for your significant other’s hand in marriage, but you’re also doing it in front of thousands and thousands of people, not to mention your favorite artists. While they may be a common occurrence, here’s a countdown of five of the most extravagant and heartwarming concert proposals:

Kesha aided in the engagement of Joey and Navid during last year’s One Magical Weekend, one of the largest annual gay celebrations held at the happiest place on Earth, Disney! She brought the men on stage with her, blindfolding them both to help sell the surprise to Navid. Joey’s blindfold was removed and Kesha prompted him to get down on one knee and pull out the ring box. When Navid’s blindfold was removed, pure shock took him over; he fell to the ground and said “A hundred times, yes!” Kesha’s dancers threw confetti while Kesha embrace the new fiancés. This was truly one magical weekend!

Robbie and his longtime girlfriend Shianne were front row at an acoustic Blake Shelton concert in California earlier this year when Robbie decided that was the perfect time to pop the question. Seconds after Robbie got down on one knee, Blake Shelton exclaimed, “Are you asking her to marry you?” After she said yes, Shelton went on to say, “Congratulations! I gotta do a song for you guys – Robbie and Shianne. They just got engaged right here in front of me!” And he did exactly that. While Shelton serenaded the couple with Nobody But Me, they refused to let go of each other while swaying back and forth, singing to eachother. I don’t know what’s more swoon-worthy—being proposed to or being serenading by the Blake Shelton!

It’s no secret that Brad Paisley is a romantic, and long-time fan Jason Smith used this to his advantage to propose to his girlfriend Courtney Larger last June. Smith brought Larger to a Paisley concert in Phoenix, with the intentions of getting Paisley’s attention so he could pop the question on stage. Unfortunately a worker at the show shut down this plan, so Smith took to Twitter to share his story with the country singer himself. “Waited 4 yrs to propose to my gf @ your concert and your guy stopped me…devastated,” Smith tweeted and then added, “I actually made this Twitter just to let u know, bc 2 of your songs mean everthing to us and I wanted to propose to one.”

Sure enough, Paisley reached out to Smith and gave him meet and greet tickets to the Nevada show. Smith told his girlfriend that he had won the tickets in a contest and the couple drove five hours to the concert, where their country idol called them out on stage and Smith finally got to propose. Paisley started singing Little Moments in honor of the couple, a song that not only means the world to them, but also helped get Paisley himself married.

What better song to get engaged to than love’s anthem, Single Ladies? Mid-song during the St. Louis date of her Formation Tour last summer, Beyoncé paused so that John Silver, her choreographer and creative director, could come out on stage and propose to her dance crew captain, Ashley Everett. He got down on one knee and, well, “put a ring on it!” Bey congratulated the happy couple before finishing up the song with her crew, and Everett could hardly contain her excitement throughout the rest of the show. What makes this moment even more special is that it all went down in Silver’s hometown in front of his friends and family, on top of the thousands and thousands of other people there. Clearly Queen B knows what she’s talking about when it comes to love!

“[Their] love is like a song, you can’t forget it,” hence this proposal ranking #1! At her 2014 concert in Illinois, Demi Lovato found herself ‘engaged’ to 5-year-old Grant. The boy was invited on stage after Lovato spotted his sign that read, “Demi I have a ring for you.” In his dapper red jeans and denim jacket, Grant was ready to propose until Lovato asked to see the ring; the star struck boy forgot to bring it up with him, but his parents quickly brought it to the stage. He got down on one knee and she said yes! The deal was even sealed with a kiss on the cheek. How could Lovato give her “heart a break” with such an adorable fiancé?