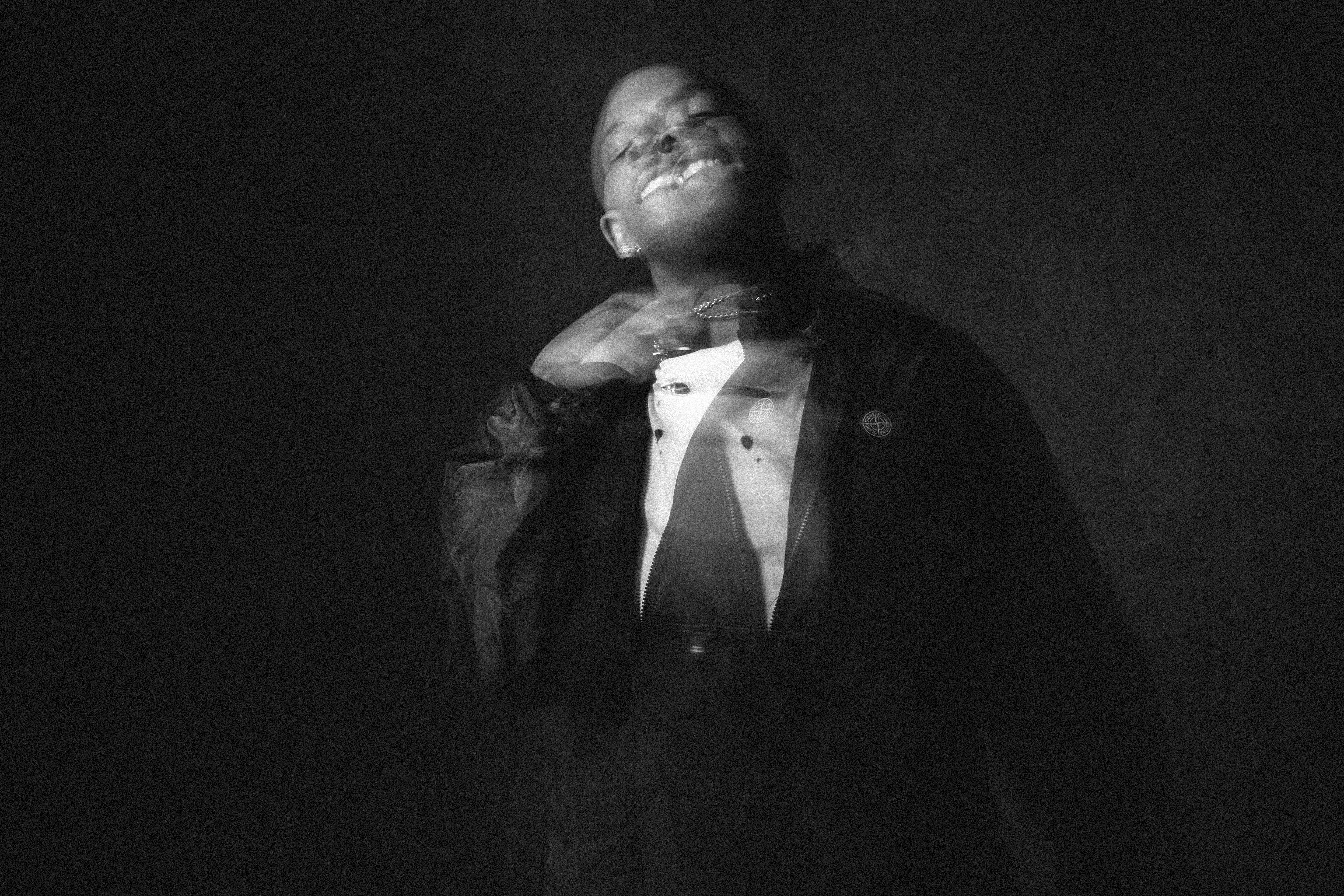 Jay 305, the L.A. “Youzza Flip” artist who’s been featured on tracks like “She Wish She Was” by YG and “Bunkin’” by Chris Brown, has recently released his debut album, Taking All Bets. The star-studded album features industry kings like YG, Travis Scott, Omarion and more, and creates an immersive experience which Jay hopes will give listeners a look into his L.A. life. Although the “305” in Jay’s name represents the Miami area code, where he spent some of his adolescence, Jay 305 has a West Coast sound that’s inspired by his upbringing in South Central Los Angeles, classic California trailblazers, and even Caribbean influences.

Jay made his breakthrough in 2012 with “Youzza Flip” and has since appeared on tracks with YG, Chris Brown, Tyga, T.I., DJ Mustard, and E 40 to name a few. His “Youzza Flip” hype was cut short when he turned himself in for a gun charge and was in jail from 2013 to 2014. After being released, Jay focused all of his energy into his music and in 2015 released Inner City Hero, a mixtape accompanied by a short film that provocatively painted the injustices of police brutality while also stressing that police are human beings, too.

Growing up surrounding himself with the messages of Tupac, Ice Cube, and Snoop Dogg while living with his Jamaican-immigrant mother in the Crenshaw District of L.A. all contributed to the unique bounce, style, and stories behind his newest album. Here, he talks transitioning out of jail, reggae, friendship with YG, future collabs with Kendrick Lamar, and new music coming soon.

Let’s talk about this album! It’s been two years in the making, so what was the process like?

The process was like…it’s hard to break it down in one sentence. I was just trying to make it the most impactful that it could be, and it took time. And with, you know, the process of time, I mean you get more creative. You get more creative and it starts making more of an impact.

You said in an interview that if it hadn’t been for “Youzza Flip” you would’ve stopped rapping?

Basically my first song ever made was “Stories.” I made it with my friend and the peers I was around. I was joking around when I made that song, so when I made “Youzza Flip” I was taking it more seriously. So seeing the success of “Youzza Flip” gave me the confidence that I could do music—that I could really put a song together and really make an impact out here.

How did you come up with the idea for the Inner City Hero video? It was a cool concept.

Thanks, it was me and my partner. I just came up with the idea because it was about police brutality, and I’ve seen that my whole life really. I just was trying to take people into the minds of these human beings, because human beings are cops too. They over-abuse their authority sometimes, so I got more creative with it and broke it down where I tried to get people to understand that just because he’s a cop doesn’t mean he’s not human. You don’t gotta be afraid of him, he’s got the same weaknesses. I just got into the mindset and played a trick on him this time. We wanted to kill him at the end, but they told us we couldn’t kill him—you can’t kill cops in movies.

Your mom is from Jamaica and you were raised in L.A., where do you see those two heritages influencing your music?

A lot of harmonies, melodies, stuff like that. The first music I ever listened to was reggae, and my mom being from Jamaica and like knowing her roots meant I know my [Jamaican] roots a little more than my African American ones. I know where I come from a little bit more, so I know myself. So again, the confidence comes from being yourself. And the strength of my mom, too. Being from the island showed me my culture, that I have a lot of culture behind me. And L.A. has a lot of culture. So my mom being from where she’s from, I would put those both together, because I had my Los Angeles background and I spent time in Miami, so I have a little bit of Miami sound, too. And I have a bounce that reggae has, and the melodies. My dad’s from Barbados, so I’m like all L.A. with Caribbean background. A lot of West Coast music has reggae roots, and Jamaican [roots]. Tupac had them; Dr. Dre had them.

Would you say music and rapping were your releases from the struggles you faced growing up?

Sure, when I was younger I would go through sh*t and I was very quiet but like as I got older, when I started doing music, I started releasing everything I was going through in my mind, through music. I would write and I knew people would listen. Because I’m not the type of person who tells somebody something’s bothering them, unless it’s like somebody trying to pick on me, of course I’m gonna stick up for myself—like a bully or something, I’m gonna stick up for myself. But I’ve never been the person that’s like, ‘Oh, my friend died, so I’m gonna sit here and cry,’ and that’s not the right way to think, you know? But that’s how I grew up. In the ghetto, you grow up to be hard and all that. So I would say that my music and my writing let me be open for all that tension that I had locked inside.

When you went to jail, right after “Youzza Flip” came out, you had to pause your music career a little bit. Was it hard to transition back in after you got out?

When I was coming home I got excited. I can tell you the first song I wrote, it was “Blame It on the Streets” with YG, and that song I wrote on the way home from jail ‘cause I was excited that I was coming home from jail, but there was also the frustration because people blame it [jail] on the parents. So I guess that right there, “Ghetto Tales,” and then the other one with Chris Brown [“Bunkin’”], I did all of those in the same year and got a deal the same year. I’m the type of person who’s not just gonna sit on my hands and feet. I’m gonna figure out something, I’m gonna go hard, as an individual. Like yeah, it was a transition. I didn’t know how it was gonna be when I got out. But I just knew I was gonna keep on going—I wasn’t gonna give up.

Did you plan any music or career moves when you were in jail? Or did everything pretty much pick back up when you got out?

It kind of all just picked up. It seemed like people were waiting on me to get home. I really didn’t have any plans, but I just knew when I came home my plan was just go hard. Just put this jail sh*t behind me and keep on pushing. Whatever I get out of it, I get out of it. Either go hard or go home.

What’s your relationship with YG like? You’ve been on a few tracks together and you’re both from the West Coast.

Yeah, we’re real close, that’s my homey. I’ve been knowing him for years, I knew him before he even blew up. I’m a little older than him, but we’re all from the same generation. Before the rapping—well he was doing his rap thing—but before he blew up, I knew YG. Like YG texted me yesterday, like that’s how close we are. And working with YG has been good sh*t. Every song we did have been good songs, great songs.

What about Kendrick? He shouted you out on Twitter, that’s pretty cool.

He shouted me out a long time ago, too, on a song, “Memories Back Then” with T.I., B.o.B. and Kris Stephens. He goes, “Wait, hold up, is that you? With them big ol’ thighs after school? Jay 305 had gave me high five.” I’ve known him since before I was rapping; it goes way back.

Are you gonna try to work on something with him next?

Oh yeah, for sure, my next project. I got one for him but it didn’t make the album [Taking All Bets] because of the time limit, we had lots of deadlines. But he’ll be on the next one for sure though.

So when you were growing up you were listening to West Coast rap, but who do you listen to now? Who inspires you?

I listen to a lot of older stuff, like Spice 1, Suga Free, Tupac, Ice Cube, that’s stuff I’m inspired from back then—and Too $hort, Snoop Dogg. For the new, I like Future. I like Future a lot, Lil Uzi, Kendrick, Schoolboy Q. It’s a lot of people, even YG. And it’s a couple underground artists too, [like] Vince Staples. And Ty Dolla $ign. Ty Dolla $ign actually showed me a lot about music, about how to make any beat speak to you. Ty Dolla $ign can make a song about anything, you know? He can talk about hamburgers and make a song about that. He taught me how to embrace everything and how to write. I get inspired by a lot of R&B too, and oldies. I get inspired by just walking outside in the streets a lot, of people in my neighborhood. I go back to my old neighborhood and hang out. Oh, and Nipsey Hussle. I gotta give him a shout out too, he really inspires me on representing L.A.

So is that what you want people to take away from Taking All Bets? A glimpse into where you’re from?

Basically, yeah. Basically my lifestyle, experience, and where I’m from, that’s what I was making with Taking All Bets. My music is a lifestyle experience. Everything is a living project. If you see me doing what I’m doing, even if you’ve never been to L.A. before, you can see how it works.

You’ve said before that you’d consider making a reggae album, when’s that coming out?

[Laughing] I’ll make a reggae album when I’m like Snoop’s age. Maybe me and Snoop can do it together—and Ty Dolla $ign! We can start a group or something—a reggae group. I’ll talk to them about it.

So what’s your next move? Are you trying to tour?

Hell yeah I’m trying to tour! Making the visuals more creative, just trying to make relationships in the music game. Whatever I drop, whatever I got going, like I want people to look at me like, ‘Ok, he’s L.A., he represents the city… but he [also] represents the world.’ I want like touring and videos and everything, it has to be an experience and that’s what I’m planning. Planning for the experience. I’ll call it the ‘big experience.’

Final word to your fans?

No risks, no rewards. Go get it! I’m working on my next project, dropping soon.

Interview: Julia Bhatt Is Ready to Take the World by Storm

If you need to update your playlists, Julia Bhatt is the artist you were looking for! The Miami-based indie musician released her new single “Hair Salon Vibes” last Friday. The upbeat track will definitely raise your spirits, and you will be listening non-stop. Julia’s debut EP, 2 steps back, came out last year and it…

Queeva Talks New Single “Show Off” and What’s Next

Music’s next big country artist Queeva shares what it’s been like reaching millions of people through her work as a teenager in the music scene. With the music video for her latest single “Show Off” has reached over 68k views, we had the opportunity to talk with Queeva about her music and what the future…