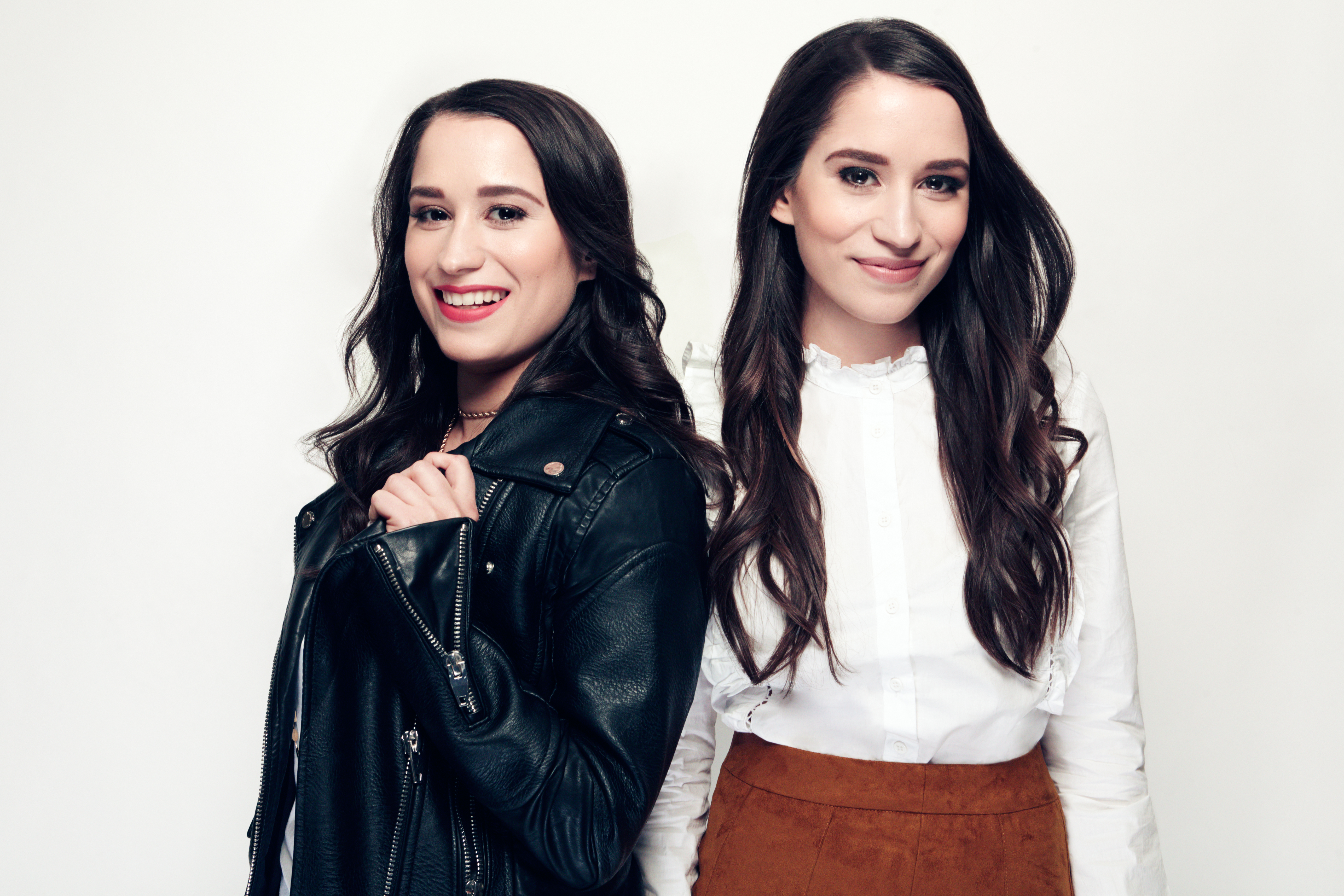 Los Angeles based twins, Michelle and Melissa Macedo, are the talented acting and singing duo that make up the electrifying alternative/ pop band, Macedo. Growing up in Pasadena, CA in a musically-inclined family, the two sisters were surrounded by musical and artistic expression. By the age of 16, they were already making appearances at local L.A. venues. They currently star in the Netflix original series, Girlboss, and they just finished filming Blood Heist, starring James Franco. They’re also dropping their album Ghost Town this fall and recently released their singles “Ghost Town” and “Truth Of It,” which have already been huge successes. Ghost Town is an emotionally-charged album, born of a difficult time for Michelle, where she struggled with anxiety and depression in the midst of a difficult break-up. The single, “Ghost Town,” exudes heart-wrenching rawness, and here Macedo talks about their experience writing it, and the album. They also explore the unique advantages they have songwriting as twins and how they’ve used their synchronization in their new album, and in their new acting venture.

Tell me about your roles on Girlboss!

We play Stacie and Stephanie who are the lead singers/guitarists of the band  “Animated Discussion,” and Johnny Simmons (Shane) is our drummer. We think Stacie and Stephanie are badass ladies doing what they love and working hard at it, although there was a small moral lapse of  judgment on Stephanie’s part.

We love the entire message behind the show and were instantly attracted to the characters and the series. It’s all about female empowerment and portraying women as human beings who are messy and flawed as opposed to an impossible ideal women have to live up to.

You’re also starring as leads in Blood Heist with James Franco. What was that experience like?

We filmed in Hamilton, Ohio during the summer. It was a lot of fun and we met so many amazing people on that set. It’s a very small town which was perfect for getting into the characters and their lifestyle. It was fun and at times emotionally challenging. We are so grateful to James for the experience. It was a true privilege to see him work as an artist.  We had incredible castmates that really brought their A game, which was inspiring to be around. Also, every set or project is like a different little family, you get really close with everyone and you always keep that special experience with you.

Did you two start as actors or musicians?

We have been doing both for as long as we can remember!  We come from a very musical family, our dad introduced us to music in every genre imaginable. Our childhood was filled with everything from Sam Cooke and Otis Redding to Debussy to The Beatles. We were always harmonizing and writing songs together. We grew up hitting up the local music scene and started to play live around L.A. when we were 16. In terms of acting, we would always be putting on plays for our parents and filming movies for fun with our dad’s video camera. Then we both started training as actors in high school and college and our love for it really grew from there. We had so much fun putting on plays and writing songs, we knew we wanted to pursue both.

Honestly, both! We really feel like one craft just makes the other one better. The more we strive to be better musicians, the more that bleeds into our acting and vice versa. They’re both about practicing self expression that is truthful and we think that helps in all formats. We are inspired when we are doing both which helps us constantly grow as artists.

I love the raw emotion behind “Ghost Town.” Was writing the single therapeutic? And why do you think it’s important to share emotions and struggles associated with heartbreak and depression through your music?

Thank you! Yes, “Ghost Town” emerged from a really difficult time. It’s a reflection and exploration of the ghosts that we all have and the ways in which we are haunted by our past. This album is a reflection of memories that became a part of our identity. In essence, how we’re each being haunted, in good and bad ways. It was a very raw experience to write, there was no holding back. It was both cathartic and nerve wracking, it felt very vulnerable to be so honest, but it’s an essential component to being a songwriter. We hope that others connect and feel empowered when they listen to it. It’s incredibly important to be honest about depression because it’s very easy to feel isolated. We just hope it can help someone who may be experiencing it to not feel so alone.

When will the full Ghost Town album be available?

What have been the driving inspirations behind the album Ghost Town?

The driving inspiration behind Ghost Town was the need to persevere through difficult times. Each song was a little encouragement to keep going. We feel like the songwriting process is like alchemy, turning pain into something beautiful and honest. Melissa will see me experiencing a relationship and she will get an idea about a song and then we can finish it together. Michelle has always written poetry as a way of expressing herself and so experiences naturally come out in words. It’s very cathartic.

How has being twins impacted your conceptual process? Do you often find yourselves on the same page, bouncing ideas off each other, or bringing different views to the table?

The best part of being a twin is that it’s very easy to communicate. We’ve had our own way of communicating for as long as we can remember. We are always bringing different ideas to the table and that is incredibly valuable. As sisters and as musicians, we are so deeply connected that one of us will supply what the other one needs, we will both add to each others ideas while still remaining honest to ourselves. That is just a part of who we are, our relationship is integral to our art.

How do you work through artistic differences, since you’re not only a band, but also siblings?

The most challenging part is that we can be too quick to dismiss one another’s ideas. We try not to, but sometimes it just happens from being so close. We always have each other’s backs and would do anything for the other. There is always that deep sense of trust and care. If we have a disagreement, we usually work it out in the same day.

What’s coming up in the future? Any touring?

We are so excited to be heading to NYC in August to star in a feature film. We will be there for a few months shooting so we are really looking forward to that! We will be playing live shows in the fall so stay tuned!