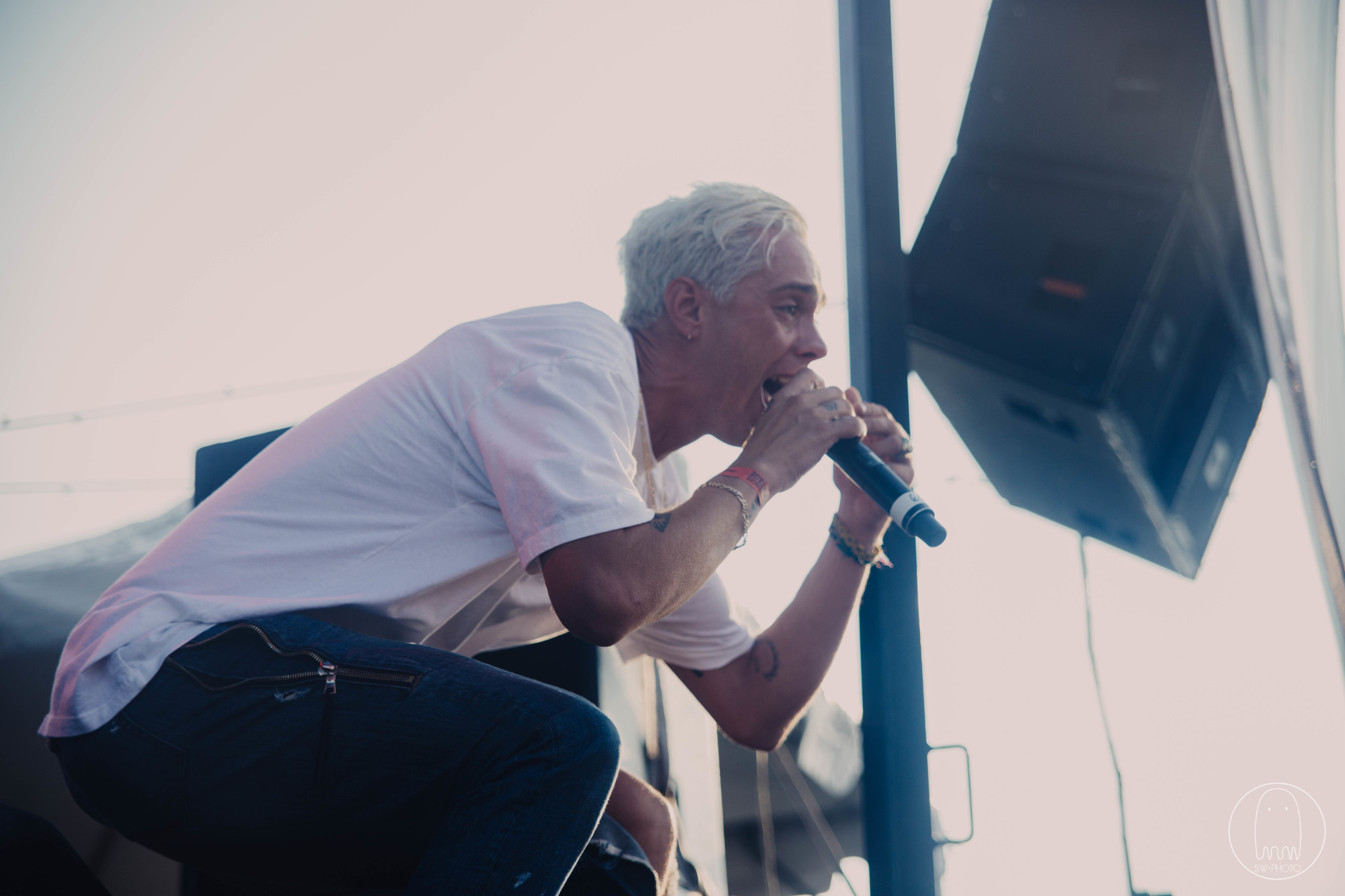 After spending his whole summer on the Vans Warped Tour, Sammy Adams isn’t quite taking a break just yet. He dropped his latest single, “Shining,” last week and if you’re looking for one last summer bop, this is it. At Billboard Hot 100 Festival, I had the chance to chat with Sammy before his set about new music, Warped Tour and what’s coming up next for him. He definitely didn’t hold back any of the details. Check it out!

So you just dropped your latest single, “Shining”. It’s such a great, positive, really uplifting song for the summer.

Where did you get the inspiration for it?

You know, this is a really easy one for me. Ace Harris, who produced it, sent me like a pack of beats, he did a song for me when I was with RCA, so we just kept in touch and it really was like, I don’t know, it captivated something. I usually love being in the studio with a producer, just ’cause things vibe and the vibe in general is just more natural. Sending things back and forth, you only have so much creativity and things to say when it’s over an email.

Yeah, you need someone face-to-face!

Yeah, like me sitting with you right here and it’s like, answering questions over the phone and we don’t even get to make eye contact or connect on the same shit. So right as I heard this song, it was amazing. We were already homies, I laid something down. Whenever you send something to a producer and they send it back and say “I fuck with this,” you’re like, “yes! Thank fucking God.” I knew it was a special one– it’s vibey, it’s very summery, which is hence why I wanted to get it out. I love putting songs out at the end of summer because I feel like it’s more nostalgic. It reminds people of the summer they just had. So it was great, but really just the production alone really made me come up with the idea and overcoming hardships and shit that happens to you as an artist.

Cool! So I’ve heard you teased a song called “Driving” for your fans on Warped Tour. How was that, getting such a big reaction from it?

It’s incredible. Being an indie artist and being a very grassroots motherfucker, it feels incredible! There’s no push, there’s no promo…yet.. but you know, for me to tweet “kiss me while I’m driving”…

12,000 likes and shit! It was really cool and honestly, probably besides “Shining” right now, it’s just such a bop. It’s so fun to play. It’s unreleased and I’m in the process of like, “what the fuck is going on with your side of things,” because I want it to be out SO bad. As always, patience is a virtue. It will come out soon.

Speaking of Warped Tour, how was that for you? It’s kind of a bit of a different demographic.

Hell yeah. Super intimidating. When you have The Adolescents and CKY and a bunch of bands you don’t really have municipal ways… like Valient Thorr… all homies now, which is incredible because I never would have thought in my life that would have came about. So it was amazing. I’d say the first week was a bit gut-wrenching for me. I had to really get my set right. I couldn’t just put together a setlist last minute. I really had to think about who was at the show, who was playing before me, who was playing after me. With such a rotating schedule, it’s almost impossible to always get that right for each person. We sort of nailed it by the second week. With no DJ, with no band, using my sort of comic relief like, “my band decided to sleep in today so y’all are my band today.” Just really like playing to the crowd and letting them know who the fuck you are. A lot of people go up and just play their hottest songs.

You need some deep cuts.

Yeah, like ten, eleven songs and then *bang!* you’re off because it’s like a thirty or forty minute set. I really wanted to let people know who I was. The cool thing about Warped Tour is these people come to listen to music. It’s not always going to be “hype! jump! hype jump! get your fucking hands up!” It’s literally, they sit there and listen to you performing, which I really loved. That made it a really fun experience. It was an awesome summer. At the end of summer I felt like I was leaving summer camp.

It’s literally like the pop punk day camp but for everyone.

Exactly! So, it was cool and I’m so glad that people accepted me as the artist I am. I’m so glad that we ended up doing it because it was like, “do we do this or not? Do we do our own tour?” And I’m really happy that we did it.

Do you see yourself collaborating, whether it’s musically or another tour, with any of those artists?

I can see a little cool collab right there.

Like Neck Deep, Our Last Night, Hands Like Houses. I mean, even like Valient Thorr, the homie Futuristic– who’s now THE homie, obviously. It’s awesome… I can go on forever. It was like an actual community of people. It was cool to be accepted.

You kind of built a new family.

Yeah! From them, being a new fan, they have an insane fanbase that I’ve never tapped into. I was just out with the Neck Deep boys on their album release Thursday at midnight, which I guess is Friday! But yeah, I would love to do something with them, I might go to Australia and do a couple of opening slots for Hands Like Houses. So we’re just shooting around a bunch of ideas. I want to collab with so many people.

Yeah, exactly! Like, a lot of these people I didn’t even know before this tour. It was really nice to find some new artists that I really fuck with.

Anything else that the fans can expect from you this year?

Yes! Me and Tascione, he’s this crazy EDM producer, or producer in general… I don’t want to just pigeonhole him into EDM! We have a joint coming out. Wyred, who produced “Where You Are,” has another joint with me that I’m going to play today. “Driving” I’m the most excited about.

As are all of your fans pretty much!

It’s insane! It’s so crazy to see that response. I’m excited to play that today. But in the future, I’m excited to be off the road, have a little time to myself, to dig deep into this next project and just make everything as “me” as possible. If there’s anything I’ve learned from this music industry, you’re the only thing that matters and obviously the fans are the only reason that I’m here, so it takes a little soul searching and a little digging to find the things you want. “Driving” was a demo track I did almost a year ago. With multiple managers, they were like, “this is not the one!” I was like, “this is the one!” So fighting your battles and pushing back against the people that are in your circle is just as important as listening to the fans. It makes me giddy thinking about dropping “Driving” because already, I know the response is great.

It’s going to blow up even more after.

Yeah, exactly, so “Shining” is a really great precursor to that. And after that, basically just try to make music with as many people as possible and keep my parallels open and start scoring movies. I want to produce more, maybe start acting but you know, for now, music is definitely like the number one.

You can check out Sammy Adam’s new single, “Shining”, on Spotify, SoundCloud and iTunes.