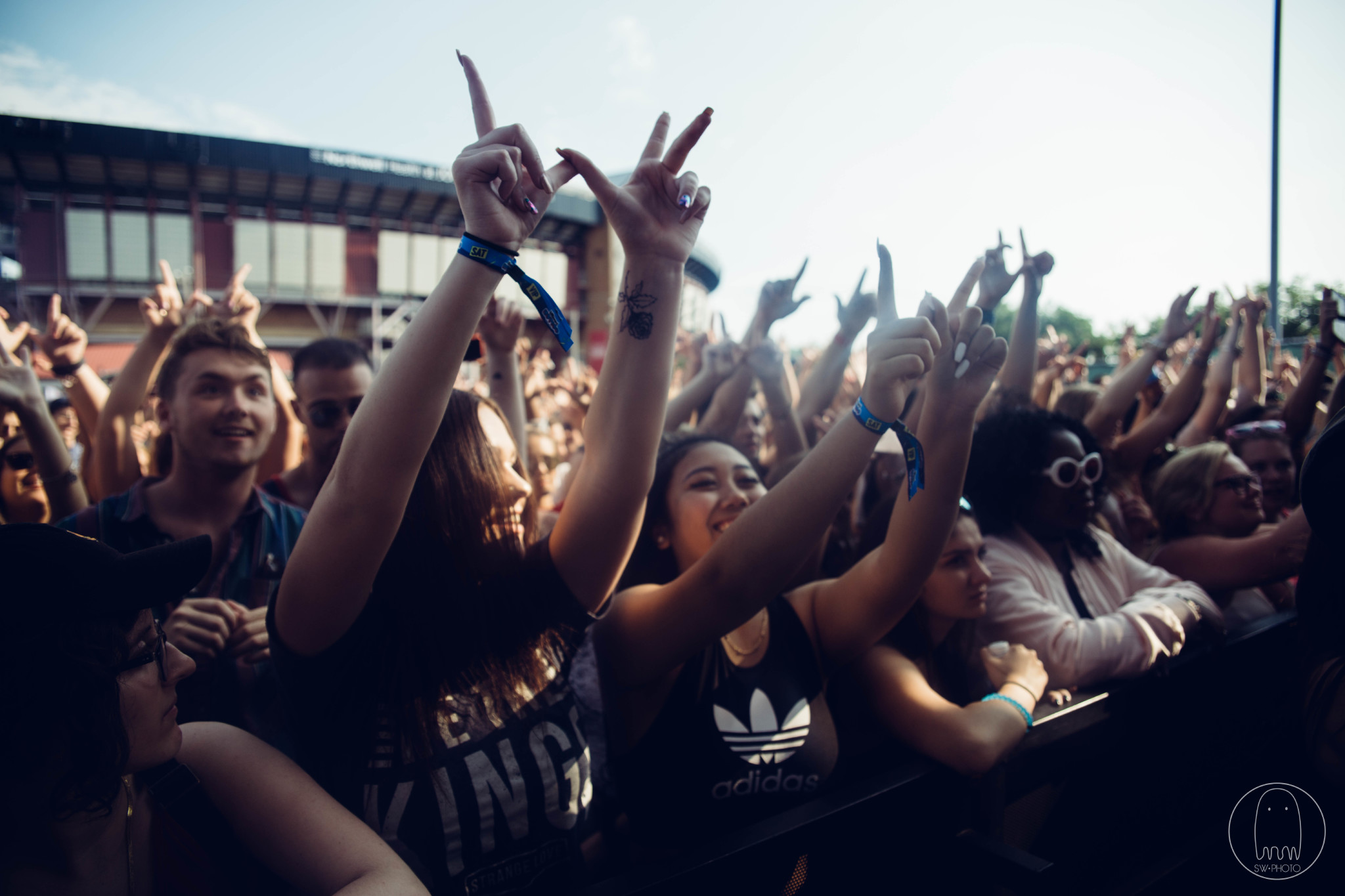 It’s been three years since the festival’s inception and the same remains true: there’s simply no better way to close out your summer than at the Billboard Hot 100 Festival at Jones Beach. As always, this year’s festival included all of your favorite chart-toppers, including but not limited to Marshmello, DJ Khaled, Zedd, Camila Cabello, Jack and Jack, Demi Lovato and more.

Upon arriving to the festival, we were met with hoards of young music fans buzzing about which stage they were off to next, and many who just couldn’t seem to decide. But can we really blame them? I mean… when Tinashe and Gucci Mane have overlapping sets, what is one supposed to do? Luckily, the festival was organized in such a way that the fans were able to see everyone they wanted to, even if just for a few minutes.

Saturday was the more low key day of the weekend, if you can even call it that, with many fans showing up in numbers as they donned their Demi Lovato merch and spent much of the day preparing to dance along to her brand new hit single, “Sorry Not Sorry.” But before Demi graced the Hot 100 stage, there was a long roster of other notable artists ahead of her, and we started off our day with Phoebe Ryan at the Sun Stage!

Pheobe’s performance (and her green hair) was completely captivating, and despite being the first performance on the Sun Stage for the weekend, her fans showed, ready to cheer her on as she sang her hits, including “Dollar Bill,” which normally features Kid Ink. She also threw in a cover of R. Kelly’s “Ignition,” catching the attention of not only her existing fans, but also of those who were unfamiliar with her music and somehow found themselves in the audience on that bright summer day.

We were also super impressed with We The Kings, who just released the 10th anniversary edition of “Check Yes Juliet” from their forthcoming album due out September 12th. Even better was the fact that they didn’t make us wait a minute to hear their hit song, opening up with “Check Yes Juliet” and immediately filling the crowd with high energy and good vibes from the start. Although it seems as though the band members have grown up and settled down a lot in their personal lives over the past ten years, while they’re on stage they are as young and lively as ever, completely entrancing their audience, many of whom have been following them from the start of their careers. Now that’s dedication!

Unique to the festival this year was the Heatseekers Stage, which featured emerging artists all weekend long. On Saturday we got to check out the synthpop group, Great Good Fine Okay, and their onstage chemistry and the beautiful falsetto coming from the lead singer, Jon Sandler, stunned us. While we loved the idea of featuring emerging artists all day, every day of the festival, the acts unfortunately didn’t get a sliver of the attention they deserved because fans were busy running to see the biggest names on the festival roster. For future reference, my advice would be to not overlook these artists, because I’m sure many of them, including GGFO, will be gracing a bigger stage at the exact same festival next summer.

For us, one of the most memorable performances of the weekend belonged to Tinashe, who brought total fierceness throughout her set and left us not only liking her, but wanting to be her. It was only after watching her dynamic performance that we found ourselves bewildered as to just how she did it, especially considering she was wearing leather pants and a sweatshirt in the sweltering heat. Given her intense dedication to her craft, it came as no surprise that fans came in large numbers to support, standing shoulder-to-shoulder as she blessed them with many of her hits, including “2 On” and “All Hands On Deck.”

Given the not-so-surprising number of fans who showed up wearing Demi apparel, it was kind of shocking that Demi wasn’t on stage for longer than she was. When she arrived on stage at 7:40pm on Saturday evening, she sang “Confident,” “Cool For The Summer,” and lastly, “Sorry Not Sorry,” before exiting the stage. While we can’t blame Billboard since she was listed as a “special guest,” it was a little disappointing that she performed so few songs and walked off stage a full ten minutes before her set was scheduled to end. But we’re not going to lie… her vocals were FIRE.

Despite Demi slightly under-delivering during her set, the rest of the night was exploding with fun… literally. When Zedd took over the Hot 100 Stage, the audience simply could not be contained as he mixed his greatest hits with the hit songs of other artists who unfortunately weren’t in attendance, like Justin Bieber! The hit songs paired with pyro that hit exactly when the beat dropped made for, as we said before, an explosive performance by the DJ and an unbelievably energetic crowd.

The first night closed with Big Sean, who proved within the first minute of his performance why he’s one of the most important names in rap music today. To say his set was exciting would be an understatement, but what I can say is that I was waiting for him to just once stumble over his words. FYI, he did not. Not once. His performance reached its peak during some of his most popular songs, including “Clique,” “Dance (A$$),” and ending the night with “Bounce Back.”

Speaking of bouncing back, Sunday we returned to the beach ready for the all-star lineup that would close out the massive festival… and massive it was! More so than Saturday, fans turned out in droves until they couldn’t turn out anymore, because the festival… you guessed it… SOLD OUT!

We started our day at the Beach Stage enjoying the easy, electronic sounds of CVBZ, but for us, the excitement really began to peak later on in the day when Echosmith hit the Hot 100 Stage. There isn’t a perfect way to describe their performance, but “magical” and “wondrous” would probably be the words I would gravitate towards first. As I looked around, fans were smiling along, taking in the positive vibes of the music paired with the lovely beach view, obviously grateful for the perfect ending to another fun-filled summer.

Things got crazy when it came time for Jack & Jack to appear on the Sun Stage. Prior to their performance, the fangirls were evenly dispersed among the crowds of the other performances and not so noticeable, but suddenly, at 4:45pm sharp, all the fangirls rushed simultaneously to catch the performance of their beloved former Magcon baes, Jack Gilinsky and Jack Johnson. If you could find a way to focus on anything other than the high-pitched shrieks coming from the audience, you would’ve been able to tell that the duo actually has an insane amount of charisma and dare we say it… talent. There’s a lot more to this duo than just their good looks, and they definitely brought their A-game to Hot 100 Fest.

One of the most highly anticipated performances of the day belonged to DJ Khaled, who, to no one’s surprise brought out his adorable son, Asahd. If I’m being honest, Asahd was the best part of the performance, as Khaled himself seemingly doesn’t do much on stage other than successfully hype up the crowd. He doesn’t actively DJ on stage, he doesn’t sing or rap on stage, and although he tries to dance (unsuccessfully), that’s about it. Regardless of the fact that I left confused about what exactly it is that he does, even I couldn’t deny that he immediately brought the audience to their feet with an energy that was not easily matched over the entire weekend. He even brought out special guest, Fat Joe, to perform his 2001 hit, “What’s Love.” Unfortunately, I may have been one of the only people there who was alive long enough to be familiar with that once-upon-a-time radio hit.

There was so much enthusiasm following Khaled’s performance for T-Pain, Lil Yachty and Young Thug, so much so that at one point security had to stop allowing fans into the Sun Stage because there were too many people! Above all other genre’s, it appeared that the rap and hip-hop fans came to Jones Beach in the biggest numbers over the weekend, running and trampling over each other, not just to get a good spot, but simply just to get a glimpse of the stage at all!

Back on the Hot 100 stage, Camila Cabello, Marshmello and Major Lazer closed out the night. It was amazing to see Camila in all her solo glory, and if anyone had any doubts about how her solo career was faring since breaking off from Fifth Harmony, it turns out it’s going extremely well. The girl that once claimed she couldn’t dance at all hit the stage with a ton of Latina flare as she sang her hit “Crying In The Club,” as well as some new songs including “Havana” and “OMG.” If any audience members couldn’t figure out who she was after those songs, she also performed her radio hit with Machine Gun Kelly, “Bad Things,” and suddenly all of their questions were answered.

Marshmello and Major Lazer were the perfect way to end the festival, as their strobe lights lit up the night sky on the beach and truly celebrated the end to an epic summer. During Major Lazer’s performance, Camila came out once again to perform the hit they share together, “Know No Better.” We’d like to personally thank Billboard for another incredible year of the Hot 100 Festival, and we can’t help but wonder who’s going to make the Hot 100 list this year and grace the stage in the summer of 2018. But one thing’s for sure… we will be there, and you should be too!