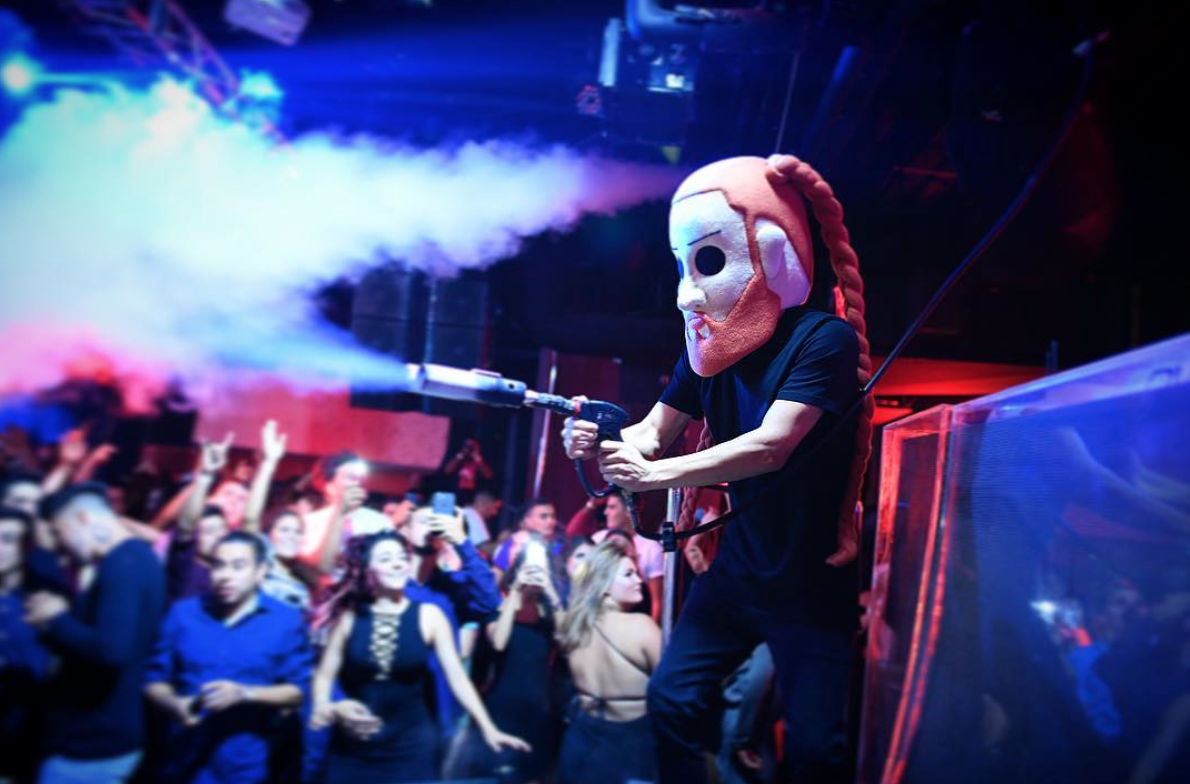 A-OH, electronic producer and DJ from Indianapolis, recently dropped a new single, “Urself.” The track combines a free-flowing, downright catchy sound with a beautiful message of positivity and loving yourself. Here, A-OH expands on that concept and will inspire you to dream big, accept yourself as you are, and understand his idea that no one can love you until you love yourself. Powerful positivity and honesty, combined with a hypnotic beat, is what A-OH brings to the table. We also talk about his long-time friendship with DJ Khaled, festivals, and upcoming singles.

Tell me about “Urself” and the message behind that song?

Originally I had produced the song as a potential remix for a record label. A particular record label had liked it and they were interested in that particular song at the time, so they were like, ‘Why don’t you do a remix for the song?’ So I produced the remix and I actually ended up liking it—what we produced—even more than the actual song and I was like, ‘Man, I hope they don’t take this actually because I would like to rework it.’ And then they ended up not pursuing that particular song, they were like, ‘We’re not gonna continue to work on this, so thank you for your time but we’re gonna pass.’ So I took the instrumental and I was like, ‘Man, I really feel like we could make a huge record with this.’ So I teamed up with [two] young artists and together we built the record. And I liked the verses but basically the hook was still focused on not have overcoming these feelings yet, so it hadn’t championed overcoming it yet. So at that point I was like this hook has gotta be a cry for, ‘We’ve done it, we’ve overcome this feeling, and we’re not questioning it anymore’ and at that point it came out to ‘No one is gonna love you until you love yourself,’ and that was the defining moment. Like, at that point, if we recognize how we’re feeling and at the same time now we’ve reached this moment of overcoming it.  Almost a self-triumph.

What inspired that message? Was it something you’ve gone through, or seen others go through?

Honestly, I feel like all of us who had a part in the song have had an experience [like that]… a transition in life in general. But to me, once we came up with that concept it just rang true because who hasn’t had a feeling of insecurity, or a feeling of low self-worth, or a period of depression? Or maybe a choice that you did in your life that rings true to you? You’ve collected some nay-sayers, or some people who don’t agree with your personal view is, and that’s when we really look for others for approval and feel bad about ourselves when we don’t have that approval. And in my life in particular, I’ve always been able to be successful when I focus on what is in my heart and what I believe in, what’s true to me and what I believe is good, what I believe that I want to do. I have this thing where I don’t believe your destiny or your journey should be based on other people’s expectations for their lives, because if someone can fully comprehend my dream then I don’t think I’m dreaming big enough because they’re not supposed to fully comprehend my dream. They’re thinking from their vantage point, my dream is supposed to come from my vantage point. So with happiness in general, self-acceptance is the number one thing that you can do to be happy and be confident in the path that you choose.

I think it’s good that you’ve brought forth something with a positive message. Do you think the music industry needs more of that?

I don’t like to speak on what the music industry needs because I feel like most consumption of music is based on what the audience gravitates to. But I will say that, for me, I have a very varied type of sound. So some of my festival tracks are high-energy, electro/trap/progressive sound that definitely have a lot more energy. But on the same side, some of my more commercial tracks are more regressive. And, for me, my entire mission is to make people feel. To me, music is emotion put to sound. If I can make you feel something, at that point I feel like my art has done what I hoped it would do. But there are times I want you to feel energy, I want you to feel good about yourself. Because that’s what I feel like we all should strive for, to feel better and happier with ourselves. So when this message came out with this song I just felt like it was very appropriate.

Yeah, definitely. When did you start making music?

I’ve been a DJ for 14 years. I played the saxophone for 7 years. I first started producing in 7th grade and I crashed my parents’ computer. Recently I dove back into it. Again, I’ve been a DJ for years, but recently taking it more seriously in the past three to four years.

Do you ever see your saxophone experience showing up as an influence in your music?

What’s up next for you? What are you working on right now?

Right now, you know, the single is “Urself.” We’ve done a couple campaigns and we have a couple partnerships down the line. There’s a lyric video out, I do all my own art work and all my own videos, so the lyric video was produced by me. So right now we have more singles to come, I have some festival, more electro-type tracks, mainstream sounding songs. But right now the focus is definitely on “Urself” and getting that message out as big as possible.

Do you have like a dream collaboration or a dream festival you want to play at?

Ok so festival-wise for me I always look at Tomorrowland in Belgium. It’s one of the biggest festivals for EDM [Electronic Dance Music] so if we could get to Tomorrowland in 2018 that would be amazing. And in the states, Ultra, EDC, that’s a definite bucket list type of festival. And there are so many collaborations I would love to do. I’d love to work with Calvin Harris, Afrojack, Armin van Buuren, [DJ] Snake, I like JOYRYDE. I would love to collaborate with so many people.

Are you buddies with DJ Khaled? I saw a picture of you guys together.

I am friends with DJ Khaled. I’ve known Khaled for years. I met Khaled, as a DJ, I think originally in Chicago, when I was living in Chicago, and again I’ve just known him for years and I enjoy watching his hustle. And he’s a true believer in self-love. Like if believes that he can do something, he’s gonna pursue it. And he puts 120% into it. I think regardless of if you love his music or whatever, I think that message of self-love and self-confidence is inspiring to whatever you’re doing.

What’s something you want your fans to know?

Always believe in yourself, always love yourself. When something pops up in your mind and someone tells you that it’s crazy, don’t give up on it. At that point, that is an affirmation that that is something you should definitely pursue because to you, that’s a dream. And it’s something you really want in your heart, never give up on it. Regardless of whatever that may be, for work, that may be a personal choice, that may be a choice in love, you know anything. Where you have a choice in life and people may not understand it. If it’s your truth and you truly believe it, you should follow it.