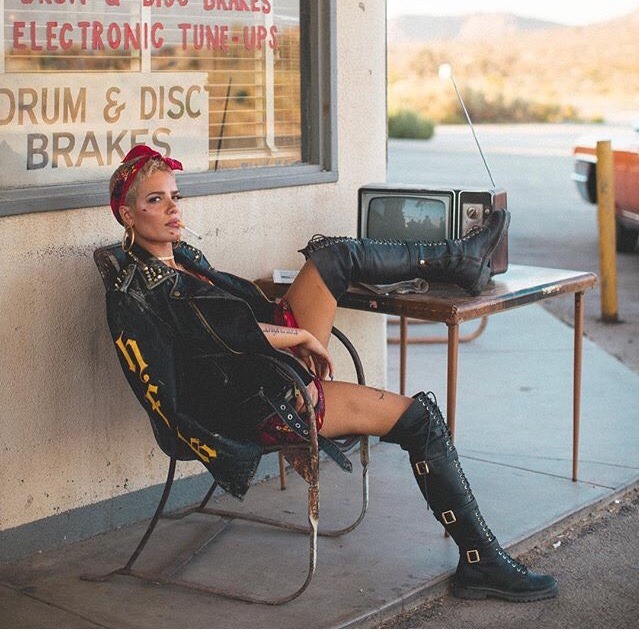 Halsey has definitely upped her game when it comes to her most recent releases. Last week, she dropped her video for “Bad At Love” and we have to say, it’s absolutely stunning! After watching the video for the first time, I made it a point to go back and rewatch her video for her last single, “Now or Never,” and I came to the conclusion that the “Bad At Love” video may serve as its sequel. At the end of the “Now or Never” video, you see Halsey chopping off her long blue locks, Which would explain her shorter hair in her newest video. Something else that makes it clear that the videos are connected is the newspaper saying she is wanted, which would explain why she is changing her appearance and running away.

My personal favorite part of the video are all of the little details Halsey slipped into it. For example, the references to BADLANDS. I love how this album connectes to Romeo and Juliet and how the music videos for the tracks tell a story of two lovers forbidden to be together.

Halsey has said that the inspiration behind the song were her own past relationships. She mentions a few of them in the beginning of the track and expresses why they did not work out. For example, the first line of the song “Got a boy back home in Michigan and it tastes like Jack when I’m kissing him, so I told him that I never really liked his friends, now he’s gone and he’s calling me a bitch again”. In this specific line she is mentioning an ex-boyfriend who drank a lot of Jack Daniels, and apparently his friends sucked too.

The chorus of the song goes on to say,  “I’m bad at love but you can’t blame me for tryin’ you know I’d be lyin’ sayin’ you were the one that could finally fix me lookin’ at my history i‘m bad at love”. Overall, I think this is one pretty relatable track. At some point in our lives we’ve all have had some pretty bad luck with love, but you can’t blame us for trying!

Check out the Video for “Bad At Love” HERE: